Bryce Mitchell: "I'm Going To Shut Him Up"

UFC Featherweight Bryce Mitchell Is Confident That He'll Prove That He's A Better Fighter Than Ilia Topuria At UFC 282: Błachowicz vs Ankalaev.
By E. SPENCER KYTE, ON TWITTER @SPENCERKYTE • Dec. 8, 2022

No division will be as hotly discussed and in focus in the opening quarter of 2023 as the UFC featherweight ranks, as champion Alexander Volkanovski ventures up in weight to challenge Islam Makhachev for the lightweight title, and contenders Yair Rodriguez and Josh Emmett do battle for an interim title that very same night at UFC 284 in Perth, Australia on February 11.

This weekend, Bryce Mitchell looks to make sure his name is part of the conversation just beyond that championship tier when next year begins as he steps into the Octagon opposite Ilia Topuria in the opening bout of Saturday’s UFC 282 pay-per-view main card.

“I try to build everything between fights, have fun with it,” Mitchell said on Thursday morning, resting in his hotel room just a couple days away from making his return to action. “I’m always trying to grow and get stronger, smarter, and even more flexible. I’m trying to be the best that I can be between every fight.”

So far, those steady gains and continual progress have been evident each successive time the former Ultimate Fighter standout has crossed the threshold into the UFC cage.

Mitchell entered the Ultimate Fighter house for Season 27 with a 9-0 record, coming off a good win over regional staple Jose “Chepe” Mariscal. He lost to eventual winner Brad Katona in the semifinals, but narrowly beat out Tyler Diamond in the season’s “bronze medal match” at the finale to earn his first UFC victory.

After garnering attention at the close of 2019 for successfully executing the second twister submission in UFC history, the Arkansas native’s stock really began taking off following wins over Charles Rosa and Andre Fili in 2020, the latter of which marked the first time Mitchell wore the camouflage shorts he’d always wanted into the Octagon.

Despite being relegated to the sidelines for the whole of 2021, Mitchell returned earlier this year to collect his biggest victory yet — a unanimous decision win over Top 15 fixture Edson Barboza that highlighted his continued development and catapulted “Thug Nasty” into the Top 10 in the featherweight rankings. 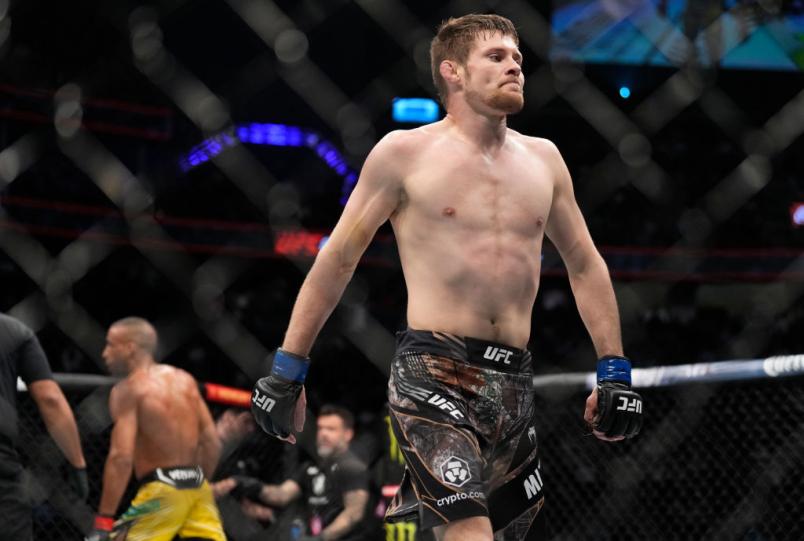 Bryce Mitchell returns to his corner between rounds of his featherweight fight against Edson Barboza of Brazil during the UFC 272 event on March 05, 2022 in Las Vegas, Nevada. (Photo by Chris Unger/Zuffa LLC)

“If I was to fight myself from five years ago, five years ago me wouldn’t have a chance,” said Mitchell when asked about his continued progress ahead of Saturday’s clash with Topuria.

Perhaps the most highly anticipated bout on this weekend’s fight card, the main card opener is actually a replacement booking, as Mitchell was initially slated to face another rising star in the 145-pound weight class, Movsar Evloev, in early November.

But a couple weeks prior to the contest, the undefeated Russian was forced to withdraw due to an unspecified injury, resulting in Mitchell’s return date getting pushed back five weeks and Topuria being penciled in across from him on the bout sheet.

“It gave me a lot more time to keep training and heal up stuff that was hurting,” Mitchell said of the change in opponents and delay in his return. “It gave me time to heal and them come back, train smarter, and not get hurt for this fight camp.”

While he’s had the opportunity to come into the fight without the lingering pains that were present heading into the Evloev contest, the assignment is no less daunting.

Topuria is another ascending talent in the featherweight division — a perfect 12-0 for his career, with his last four victories coming inside the Octagon.

One of several Georgian fighters scaling the ranks in their respective weight classes at the moment, “El Matador” is unafraid to speak his mind or get into verbal sparring matches, as he did with Paddy Pimblett, who competes in the UFC 282 co-main event, earlier this year.

Thus far, his efforts have backed up his words and shown that Topuria has the potential to be a legitimate contender in the talent-rich 145-pound weight class. Mitchell is quick to acknowledge the skills and makeup of his opponent this weekend, but isn’t particularly fond of the way Topuria conducts himself, and looks forward to silencing him this weekend.

“I think he hits hard, he moves his feet pretty well, and if he does get hurt, he’s going to try to recover; he’s not going to try to quit and look for a way out,” he said, offering a bit of a scouting report on Topuria, who overcame a first-round knockdown to register a second-round knockout over Jai Herbert at lightweight earlier this year in London. “I think he’s very tough, so I respect his skill set.

Currently stationed at No. 9 in the rankings, Mitchell had ambitions of fighting someone further up the divisional ladder, rather than working backwards this weekend, but when his bout with Evloev was scuttled, Saturday’s clash with Topuria was the offer on the table, and the 28-year-old championship hopeful wasn’t going to spend any more time hanging out on the sidelines.

“I want a title shot, obviously, but they’re not gonna give me one,” he said with a smile when asked about facing someone ranked behind him this weekend. “They weren’t gonna be able to find me another fight by the end of the year, so if I wanted another fight, I’d have to fight him.”

While some see fighting backwards as a “no-win” situation, stepping into the Octagon and handing Topuria the first loss of his career would be a major statement for Mitchell heading into what should be a massive year in the featherweight division.

It’s also a chance for the ever-improving competitor to showcase the gains that he’s made and that he’s capable of hanging with the very best of the division, no matter where the fight takes place.

And that’s precisely what he intends to do this weekend in Las Vegas.

“There’s a lot of ways it can go, and I’m prepared for all of them, brother,” he said. “We’re gonna find out Saturday which way it goes.”