"I’ve been fighting almost ten years, I definitely feel like I’m a
pioneer of the sport in the smaller weight classes, and it feels good to
start getting more credit." - Bryan Caraway 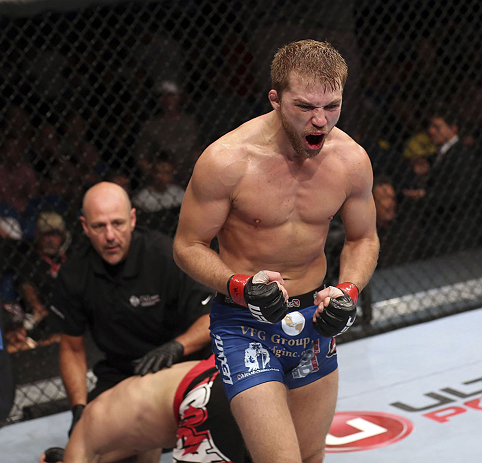 If you’re using a music comparison to describe Bryan Caraway’s 2012 campaign in the Octagon, it’s like Led Zeppelin played a show and didn’t come back for an encore of Stairway to Heaven. That’s how high people were on the former Ultimate Fighter competitor’s come from behind win over Mitch Gagnon at UFC 149 last July.

Containing all the drama you want from a bout that ends up taking home Fight of the Night honors, Caraway shook off some rough moments early on to submit the tough Canadian in the third and final round and wrap up his second UFC victory and first at 135 pounds.

But then, nothing. No encore, no chance to build on the momentum of his biggest pro win, as he was forced to the sidelines due to injury.

“I’m used to wrestling and competing growing up and we’d wrestle two, three times a week – we’d have a dual on Tuesday, a dual on Thursday, and then we’d wrestle three, four, five times on Saturday,” said the former Central Washington University wrestler. “Even in wrestling it would take a few matches into the season to start getting momentum, so that’s definitely a challenge in MMA, not being able to fight soon, and it seems like almost every fight you’ve got a little of the Octagon jitters or a little rust. So it’s tough.”

That’s the bad part of the whole scenario. The good part is that Caraway is back in action this Saturday against Takeya Mizugaki, and that he’s coming into the bout off a win that did lift his profile considerably in a talent-rich bantamweight division. That aspect was a long time coming for the 28-year-old from Goldendale, Washington, who has been competing in MMA since 2004.

“I’ve been fighting almost ten years, I definitely feel like I’m a pioneer of the sport in the smaller weight classes, and it feels good to start getting more credit and have people recognize me for my talents and my name. It took a lot of hard work.”

That work is far from over. In fact, with a new year underway, it’s just beginning, especially when facing an opponent like Mizugaki, one who has only been finished once in the last three years (by Urijah Faber in 2010). Yet at the same time, the Japanese fighter is erratic, with his last 11 fights following a loss-win-loss-win pattern that would presumably make him hard to get a read on.

“I don’t think it matters necessarily what guy shows up, because I think every Mizugaki shows up tough as nails,” said Caraway. “I think it just happens to come down to certain weaknesses or certain matchups. I believe that matchups are huge in MMA and they make fights. It’s not always the best guy that’s necessarily the champion or the best guy that wins the fight – it can just be the style matchup.”

But Caraway believes he has the style to trouble Mizugaki, and perhaps add him to his lengthy list of submission victims. Eight of Caraway’s last nine wins have come by some form of choke, but this potent finisher knows that he could be in trouble if he pushes the envelope too hard against a rugged competitor like Mizugaki.

“I think that’s what makes him the most dangerous,” he said. “He never goes away and I’m a finisher, so I just have to not be overzealous in trying to finish him. I’ve got to stay calm and I know that if I go in there and get so close to finishing and try so hard that I can end up gassing myself out. So I have to be smart, knowing that this could easily be a 15 minute war.”

It’s a veteran lesson that Caraway picked up a long time ago, yet his finishing rate hasn’t dipped at all. He owes that to experience and attitude.

If he gets it, that’s three straight in the Octagon, which isn’t an easy feat, especially at 135 pounds. But he’s not looking too far ahead at the moment, promising only that 2013 will provide more fights that will demand – and hopefully get – an encore.

“I don’t know what 2013 holds for me,” said Caraway. “The only thing I can guarantee is that I’m gonna go out there and fight 110%, I’m gonna put on a show, and I’m showing up to win. That’s all I can guarantee. I know I’m no pushover, I know I have a good chin and a lot of heart, and you will see that every time – someone who wants to win.”