"I’m just excited to go in there and show people that I’m still relevant and get another win and get back on track for a title." - Bryan Caraway 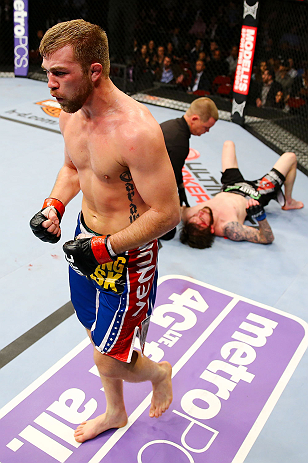 Waiting to heal up and get back into the Octagon and the thick of the bantamweight contenders’ race, Bryan Caraway thought moving to Las Vegas would do him good. And it has provided its good points, but being unable to fight while living in the Fight Capital of the World did put him through some trying times as well.

“At first being in Vegas helped keep my face in the mix, at least with the UFC, and cornering people still kept my name out there, so that was good,” he said. “But it sucked because I wanted to get back in there and fight again, and when I was getting closer to the fight and going to these other events, it definitely made me anxious and being there was kind of tough. I’m a fan, and I wanted to get in there and fight. So there were positives and negatives.”

Today, those negatives are gone (unless you count triple digit temperatures as a negative), and the positive is that on Saturday night, the 29-year-old “Kid Lightning” will put the gloves back on and return to active duty for the first time since his April 2013 win over Johnny Bedford as he takes on rising 135-pound star Erik Perez.

In that bout with Bedford, Caraway picked up his third UFC win in four tries and his second post-fight bonus, as his Submission of the Night joined the Fight of the Night award he earned for his win over Mitch Gagnon. Things were on the upswing for the Ultimate Fighter 14 competitor, but then his body said ‘stop,’ with various injuries keeping him out of the Octagon for over a year.

“It’s been hard,” he said. “It’s been a year layoff dealing with all the different injuries popping up and that’s kind of rough. You get hurt, you get out of shape more, and then you try to go hard like you used to and then you get hurt again. It’s just a really vicious cycle. So that was challenging to ease back into training and not push myself too early and not get hurt again.”

“It does get me more amped up,” said Caraway. “I trained with TJ Dillashaw for two years before the show at Alpha Male, so I was with that guy when he first stepped into the gym. And to see how fast he grew and how hard he worked, it was really inspiring. Although many other people didn’t think he could win, I knew he was capable of beating Barao. I just never expected him to dominate him like that. But it really amped me up and let me know that dreams can come true. Knowing how hard Dillashaw worked, I just realized that’s the direction for success. Hard work always triumphs, and it was pretty inspiring to see that performance.”

Now he’s got his chance to deliver a memorable effort of his own against Perez. Sure, there’s no title on the line, but with “Goyito” ranked number 12 in the division and Caraway at 14, the winner of this weekend’s matchup could move within striking range of the top ten.

“I don’t think there was a better fight in all of the UFC for me to fight as far as publicity, my first fight back, and the style matchup,” said Caraway of the upcoming bout. “I know he’s a very tough kid, he’s really hungry, and he has a lot of hype right now and I love it because although he’s very tough, I don’t think his hype matches his skill level. I’m not saying his skill level’s not high because he’s obviously been beating guys who are very good, but I just don’t think it quite matches the hype. It will be a tough fight, and although he’s young and hungry, I do think his inexperience will play a factor in this fight. I respect him as a fighter and a person, and I’m just excited to go in there and show people that I’m still relevant and get another win and get back on track for a title.”

That excitement is evident in Caraway’s voice, and not just his words. He’s missed this place, and as he makes his return, he feels all the pieces are in place for him to make a run at the belt – now.

“I’m finally realizing that things are clicking and I’m in the right place and doing the right things,” he said. “I’ve been fighting for a long time, but I didn’t have the proper training mentality or maybe the proper coaching, so I didn’t put myself in the right position to win. Experience has allowed me to learn from those mistakes and I see it paying off. I’ve been winning fights and moving up the ladder in the rankings and winning bonuses, so I’m doing the right thing and working hard.”