"I really feel that this is my chance. If I go out there and beat Raphael Assuncao, I think it would solidify me as the No. 1 contender." - Bryan Caraway 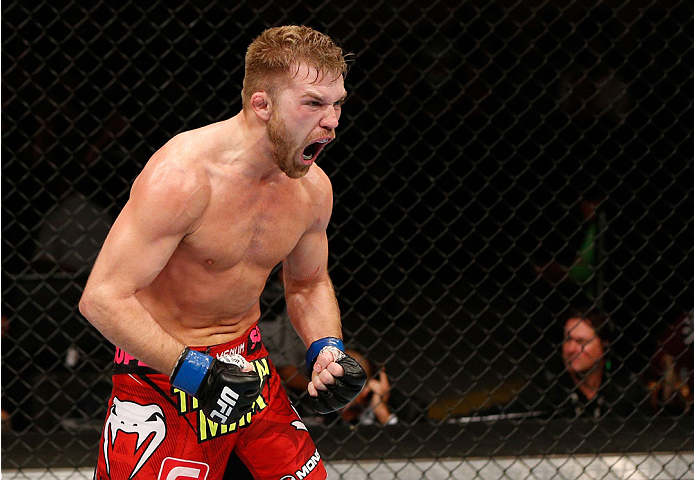 Those were the first words Bryan Caraway uttered on Season 14 of The Ultimate Fighter as he warmed up backstage for the elimination fights to get into the house. After earning his way on to the show with a “grind ‘em out” victory that failed to impress UFC President Dana White and the coaches, the anxiety of the veteran from the Pacific Northwest would be front and center in the second episode of the season.

Selected to be a part of Team Mayhem, Caraway lobbied coach Jason Miller to be the first fighter into the cage from their team, detailing the severe nerves he deals with prior to stepping into the cage. Despite having 20 fights under his belt prior to entering the competition, the days leading up to his fight had always been a nightmare for Caraway.

Even though the self-described “Nervous Nancy” didn’t sleep much heading into his matchup with Marcus Brimage, the former collegiate wrestler played to his strength, advancing to the featherweight semifinals with a first-round submission victory.

While he would get bounced from the competition by eventual winner Diego Brandao, Caraway hasn’t looked back since stepping off the long-running reality TV show and on to the UFC roster. A move down to bantamweight and three victories in four fights at the 135-pound limit have elevated Caraway to No. 10 in the rankings and placed him opposite Brazilian standout Raphael Assuncao in the co-main event of this weekend’s debut event in Halifax, Nova Scotia, Canada.

Three years after his introduction to the UFC audience, the now 30-year-old contender has found a way to keep his anxiety in check and turn the negative thoughts that once dominated his mind into positive energy that produces finishes inside the Octagon.

“Being on The Ultimate Fighter was a huge breakthrough for me in terms of making my anxiety levels go through the roof,” Caraway offers, reflecting on the strides he’s made since his time in the house. “Not having people I know, not having familiar faces, not knowing who you’re going to fight, cutting weight on short notice. Basically, it’s the most stressed you can ever possibly be.

“Having that and then coming out afterward, everything after that was easier. I have my family here. I have a phone to call people, coaches that know me, a full training camp. After having that, everything else seems a lot easier.”

These days, Caraway is back in Las Vegas, taking part in the renaissance going on at Xtreme Couture alongside his long-time girlfriend, UFC women’s bantamweight contender Miesha Tate.

Though he admits that working with coach Robert Follis on a permanent basis was part of the lure of relocating to the fight capital of the world and has aided in his continued progression as a fighter both inside and outside of the cage, Caraway admits that the bigger factor in winning the battle against his anxiety issues has been tackling the problem head-on.

“A lot of it is just growing up, getting more mature, but a huge factor was focusing on it and doing a lot of self-analyzing – constantly reading and studying other world-class athletes that struggled with the same things.  (I had to start) letting myself open up and try to do the things that all these different books were saying, like positive talk and believing in the words you’re saying. Even though I felt like I believed them, just taking the chance and letting myself be open to trying it has made a huge difference.”

After coming out on the wrong side of a narrow split-decision loss to Takeya Mizugaki in Japan in March of 2013, Caraway has rebounded with back-to-back submission wins against fellow TUF 14 alum Johnny Bedford and highly-touted prospect Erik Perez to break into the Top 10 in the bantamweight rankings. This weekend, he has the opportunity to propel himself on to the short list of potential title challengers with a win over Assuncao.

The last few months have been a series of bad breaks for the Brazilian, as an injury prevented him from challenging Renan Barao for the bantamweight strap at UFC 173 in May, leaving him to watch T.J. Dillashaw, a man he had beaten less than a year earlier, turn in a virtuoso performance to claim the title in his stead.

Assuncao’s lost opportunity has the potential to pay serious dividends for Caraway if he’s able to bring his opponent’s six-fight winning streak to an end on Saturday.

“I’m super-stoked because Raphael Assuncao is the last guy to get a win over T.J. Dillashaw and it wasn’t that long ago, so to get this opportunity is huge. I thought Rafael Assuncao was the No. 1 contender and he should have gotten the title shot, but that’s what’s crazy about this game. People get hurt, injured in practice, whatever it is, this is how the cards fell and now I get the chance to beat the man that beat the man.

“I really feel that this is my chance,” Caraway, who carries a 19-7 record into the Octagon inside the Halifax Metro Centre this weekend, continues. “If I go out there and beat Raphael Assuncao, I think it would solidify me as the No. 1 contender. He’s on a six-fight win streak, he beat Dillashaw and everybody else he’s faced at bantamweight – if I can go in and beat him, I think that sets me up for a title shot. Why wouldn’t it? He’s got a win over Dillashaw and I beat him.”

Whether that’s how things shake out or not is still to be decided, but the fact that Caraway is at this point is a testament to the energy he’s devoted to improving as a fighter, even if the weaknesses he needed to address couldn’t be dealt with inside the training room.

“The biggest factor that has helped this to happen is just my mentality – being mentally focused, confident and learning how to deal with my anxiety issues, how to cope with all that stress and turn it from a negative feeling to positive thoughts.

“I feel like I’ve always had great skills, great physical tools, but now having that mental edge is huge for me.”