The Foundations Of Bryan Battle

TUF 29 Winner Rides His Winning Streak Back To The UFC Apex This Saturday
By Thomas Gerbasi, on Twitter: @TGerbasi • Dec. 16, 2022

Leave it to Bryan Battle to screw up his plan for holiday feasting by taking a short notice fight with Rinat Fakhretdinov this Saturday in Las Vegas.

“Listen...it was screwing up my Christmas eating by not having a fight,” Battle laughs. “I was living in a constant state of ‘When am I gonna get a fight?’ And I took things in my own hands.”

He did. When Michael Morales was forced out of the UFC Fight Night show due to injury, Battle was on the phone.

“The last fight I didn't take any damage, so I've been training since then,” said Battle, who needed just 44 seconds to halt Takashi Sato in August. “I haven't been in a full-blown fight camp, but I've been training every day, I've been helping my teammates get ready for their fights, I'm in great shape and when I saw Morales pulled out, I saw it as an excellent opportunity to step in and steal a win away.”

As for the opponent, it didn’t matter. 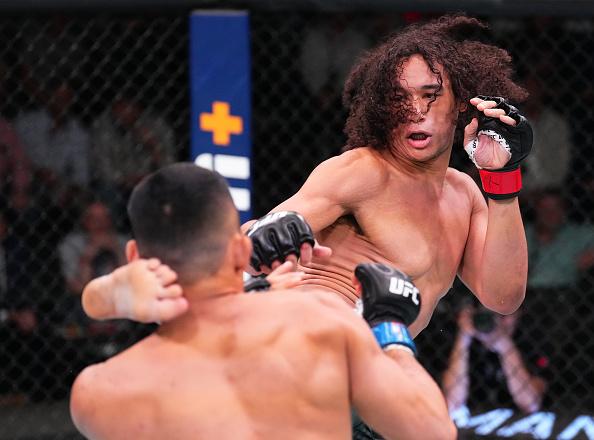 I joke with him about a spot being open since Robbie Lawler was just taken out of his UFC 282 fight with Santiago Ponzinibbio, and Battle, 28, talks about not being high-profile enough to get a foe with that name recognition yet. But I counter, saying that the North Carolina product is already three fights (and wins) into his UFC career, and was in everybody’s living room for 12 weeks while The Ultimate Fighter was going on.

“I feel high profile, but there's people who are more high profile than me,” he said. “I still got some work to do and I'm not mad about. I'll pay my dues. That's why I just love opportunities like these. You can come in and make a statement, differentiate yourself from the rest of the group. And I think that will open up more opportunities for me in the future.”

But Battle versus Ponzinibbio?

“I definitely saw that and thought about that for a second.”

It’s a crazy world out there in the fight business. It’s not like the big four sports where you get a schedule at the beginning of the year and you know what you will be doing on December 17. In the fight game, things happen that thrust the willing and able into opportunities that could be career changing. Fighters know this. Friends and family often don’t, but Battle says his circle is well aware of how this all works.

“They're used to it,” he said. “Honestly, my UFC career I've had a lot more real fight camps than I had. When I was an amateur, I had six fights in one year. I took a fight on two weeks' notice one time up a weight class. I took a fight on one week's notice one time up a weight class. Even as a pro, I had a hard time getting fights because I had a more extensive amateur career and I had some good wins on there. So I always had to be ready to go, otherwise it would have taken me forever to get fights. I had to take fill-in spots. Otherwise, people didn't want to sign up to fight me. This isn't something that's out of the ordinary for me.”

He even says that on TUF 29 (which he won, by the way), the six weeks in the house are spread out over 12 episodes, so fights can come in a fast and furious fashion in real time.

“You gotta take a nap, let your face heal for a little bit and you're back in there,” he said. “So two weeks' notice (for Fakhretdinov)? It would have been bad if I had been on the couch and being lackadaisical, but I've been very involved and very active.”

And eager to move forward in a tough division that he has acclimated to perfectly. That doesn’t mean he doesn’t miss the good ol’ days a little bit. 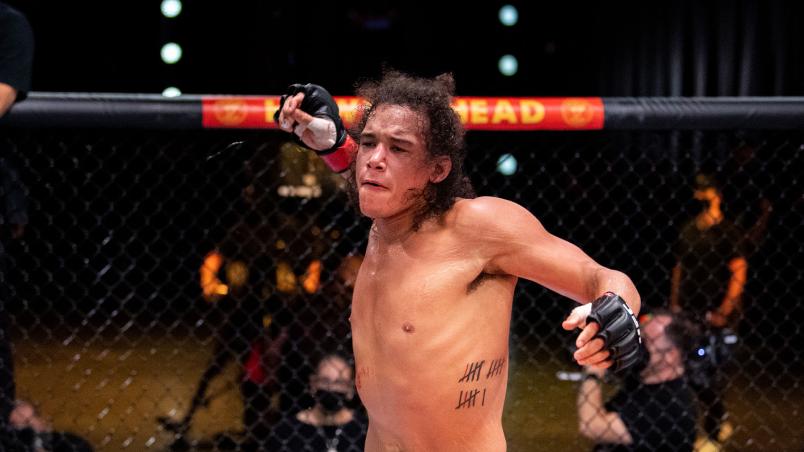 Bryan Battle reacts after his submission victory over Andre Petroski in their middleweight bout during the filming of The Return of The Ultimate Fighter at UFC APEX on May 20, 2021 in Las Vegas, Nevada. (Photo by Chris Unger/Zuffa LLC)

“People always think I'm pandering to the crowd when I go to local shows and I say how much I enjoy going to those, but it's a little bit different when there's people in the crowd that really know the fighters,” said Battle. “The people know the fighters and the fighters know the people. It's a different emotional energy at those regional shows; it's almost tribal a little bit. You got your boys and you're going into Kentucky and the hometown guy's house. Or this guy from Colorado's coming over to fight you in North Carolina. So there's a little more of that on the regional scene. It's a little bit more romantic. There's some things I miss, but I wouldn't go back. (Laughs) I'm happy where I am for sure.”

Did he just say “romantic?”

“Those times are the foundation of who I am as a fighter today,” said Battle, doubling down on the unique beauty of the regional fight scene. But these days, the only way he’ll be at a regional show is as a spectator or cornerman, because he’s in the big show with three wins and a high upside. Is it high enough that he’s starting to feel unbeatable? How’s that for a loaded question?

“Definitely not unbeatable, but I feel like I can beat anybody,” he said. “That's what's crazy about it. Striking and grappling are so constantly evolving. There's a part of the game where you think you'll have it locked down and a year goes by and there's a new tweak that's been added to the technique that now makes it a really big problem. And I did get to the game late, so it's crazy, because now, I'm technically better than I've ever been and it's crazy that I got to where I am without being as technically proficient as I am now. So I'm just excited. Takashi, I didn't really get to show a whole lot so I'm excited for this fight. There's definitely gonna be opportunities in there, just based on things he does, that the fight could end quick. He's also shown the ability to end a fight quick, so we both have that ability, but even if it goes long, I'm excited to show how much different I've look as opposed to the last time everyone saw me.”

Not unbeatable, but able to beat anybody. I like it. That’s a young man who is confident, not cocky, before he makes the longest walk in sports again this weekend.

“The confidence has definitely gone higher,” Battle said. “When I started training, I always envisioned that, but there's a difference between seeing it and stuff actually going your way. If you see yourself at the top of the game, you gotta work to the best of your ability that you feel like people at the top of the game would do so you're prepared for that when you get there. There's definitely still a lot of growth that I can still have, but I feel like I have the ability to compete with anybody. I'll pay my dues, I'll climb up the ladder, but if an opportunity shows itself, I'll be prepared to take it.”