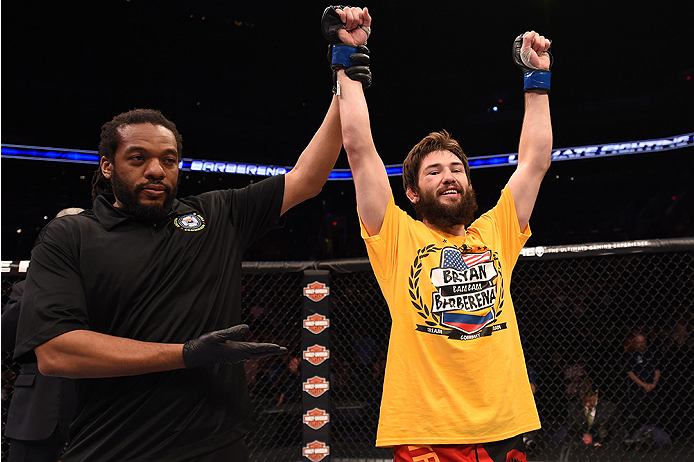 There are few things in the world Bryan Barberena loves more than stepping into the Octagon and letting it all fly.

The 25-year-old recently entered the talented ranks of the lightweight division - a place where there will be no shortage of opportunities for him to mix it up with opponents who harbor the same mentality toward the fight game as he does. That’s fantastic news for the Arizona transplant, as he’s not looking to waste any time making a name for himself under the UFC banner.

The bearded wild man sets a blistering pace from start to finish and he’s willing to put his skills up against anyone from any tier of the talented lightweight fold. That mindset is an offshoot of his willingness to show and prove with every opportunity that comes his way, and “Bam Bam” is confident he brings something most fighters he will face inside the Octagon won’t be able to handle.

That was certainly the case during his promotional debut at UFC on FOX: Dos Santos vs. Miocic back in December. The up-and-coming prospect squared off with Joe Ellenberger in front of a raucous Phoenix crowd, and made a loud statement by stopping Ellenberger in the final frame of the bout. It was an impressive showing from Barberena, and one he believes let the rest of his division know that he’s here to stay.

While Barberena possesses a natural killer instinct that he will put on display at every turn, the development of his overall skill set rests in the hands of coach John Crouch and his squad at the MMA Lab in Glendale. In addition to the guidance Crouch provides, the team of talented fighters led by former lightweight champion Benson Henderson is a tight-knit unit who have worked hard to make their gym a place where fighters from all over the competitive spectrum have a place where they will be pushed and accepted by their brothers and sisters in arms.

In Barberena’s mind there is no team he would rather be with, and he sees everyone involved with the MMA Lab as family. It’s because of that unbreakable bond that has been formed inside the gym that he believes he’s found the optimum place for every aspect of his life and career to thrive.

“People talk about teams in this sport and we definitely qualify, but we are more than that,” Barberena explained. “We are a family at the Lab. Everyone on the team is constantly pushing one another inside the gym, but it is also a place where I bring my kids when I train every day. Everyone helps me out and my kids see those people as their aunts and uncles. Coach helps me watch over them and it’s just a wonderful family environment there. It’s a great group of people and the family bond we have there is key.

“My family is very supportive of what I do. My kids are young, but they are in the gym with me all of the time and I think they somewhat understand what is going on. That definitely helps but it’s hard at times. My wife and kids don’t get the attention they definitely deserve, but they understand when it’s time for training camp that I’m going to have a little bit of time away from them. But they are always supportive and I couldn’t ask for a better family to be on this journey with me.”

The next step of that particular journey will come this Saturday night when he steps into the Octagon to mix it up with undefeated Canadian Chad Laprise at UFC 186. The Tristar product is one of the most highly-touted talents to come out of the Canadian market in recent years and he has been living up to the hype with each step as he won the 170-pound class of The Ultimate Fighter Nations tournament, then followed that up with a dominant victory over Yosdenis Cedeno six months later in Halifax, Nova Scotia.

With Laprise fighting out of the heralded Tristar camp in Montreal, Barberena knows he will be walking into hostile territory. That is a detail he shrugs off with relative ease because there is more at stake in the bout than simply winning or losing where Barberena is concerned. He’s determined to get the best of Laprise on Saturday night, and his motivation to get the job done are the people who support  him every day in his quest to find success in a chaotic field.

Everything Barberena does is to show them what is possible in this world, and that’s the recipe for him to become a monster on fight night.

“I honestly don’t know a whole lot about him (Laprise) other than that he’s undefeated and that he won The Ultimate Fighter Nations,” Barberena said. “I don’t ever watch tape on my opponent because my coaches take care of that in order to prepare me for the fight. I just worry about what I need to do and he seems like a pretty tough guy. That said, I think we are going to have a battle in Montreal. I’ve had some good performances and I think this fight definitely has the potential to steal the show.

“A big part of why I went after this career in MMA was to show my kids that dreams are possible,” he continued. “You can reach your goals and dreams. You don’t have to give up when things get tough. You don’t have to give up when there are a bunch of other people out there working to take that away from you. I want to show them it’s possible to win and get through it all and it doesn’t matter who is standing in your way.”