Brunson relishes opportunity to fight at home in North Carolina

Since the start of 2015, Derek Brunson has fought eight times, with his UFC 208 encounter with Anderson Silva standing as the only time the Wilmington, North Carolina native has gone the distance.

What’s truly interesting is that in each of his seven other fights, Brunson hasn’t been out of the first round and has only spent seven seconds longer going 6-1 against the likes of Uriah Hall, Dan Kelly, Lyoto Machida and current middleweight champ Robert Whittaker than he did in his bout against “The Spider” last February.

Clearly, Brunson doesn’t like to waste time once he steps into the Octagon.

“I just like to go out there and find my openings,” said the 34-year-old contender, who carries a two-fight winning streak into his headlining assignment opposite Ronaldo “Jacare” Souza on Saturday night at the Spectrum Center in Charlotte. “I spend a lot of time finding my setups and moving around and being able to pick my shots (in practice) so that whenever I get in the Octagon, it makes it that much easier.” 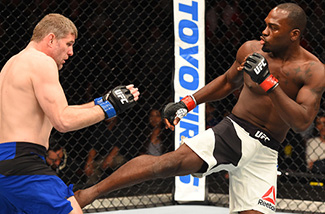 After dropping a controversial decision to the middleweight legend Silva to begin last year, Brunson rebounded by making easy work of Kelly and Machida to reaffirm his standing as one of the top contenders in the 185-pound weight class.

Now, he gets a chance to cross off one of the goals he set out for himself at the outset of his UFC career by taking on Souza in the main event of this weekend’s UFC on FOX show at home in “The Tar Heel State.”

“It feels good to bring the UFC back to North Carolina and be a part of it, fighting in the main event,” said Brunson, who has been on the road for three of his last four appearances, having faced Whittaker and Kelly in Australia and New Zealand, respectively, before venturing to Sao Paulo, Brazil to face Machida. “It’s definitely a big deal. When I first got in the UFC, that was one of the goals I wanted to achieve and I was able to get it done.”

In recent years, Brunson has been spending more and more time at home in North Carolina, having opened his own gym – Brunson’s MMA & Fitness – in Wilmington and slowly building a strong in-house squad to train with while still supplementing his efforts with the occasional trip to the Jackson-Wink MMA Academy in Albuquerque, New Mexico.

But changes in his personal life have kept the eighth-ranked middleweight from venturing too far from home this time around and he couldn’t be happier about it.

“I haven’t been able to make it out to Albuquerque given that my daughters live with me full time now, so I have to make sure to get them up to go to school and check homework and all that stuff,” said Ziara and Kiara’s father. “I have been making it to Atlanta once a week – I go down for a day-and-a-half to work my kickboxing because that was one of the things I needed to up, being that I was a wrestler when I came in.

“(Having my daughters with me) keeps me focused,” he added. “It keeps me focused on what I have, makes me train harder and helps me keep things in perspective. When I come home from the gym, I can relax and get away from it all and be a dad, but when I’m in the gym, it’s full-out hustle mode.”

Coming away on the wrong side of the scorecards against Silva really didn’t sit well with Brunson, not only because he believed he won the fight, but also because he was looking to quickly return to the win column after having his five-fight winning streak snapped by Whittaker just a couple months earlier.

Instead of letting the debated decision weigh him down, the UNC-Pembroke grad jumped right back into the fray and started a new winning streak, stopping Kelly and Machida in less than four minutes combined to reestablish himself as a serious threat in the suddenly wide open 185-pound weight division.

Now, he gets the chance to avenge one of the five losses on his record by sharing the cage with Souza for a second time. 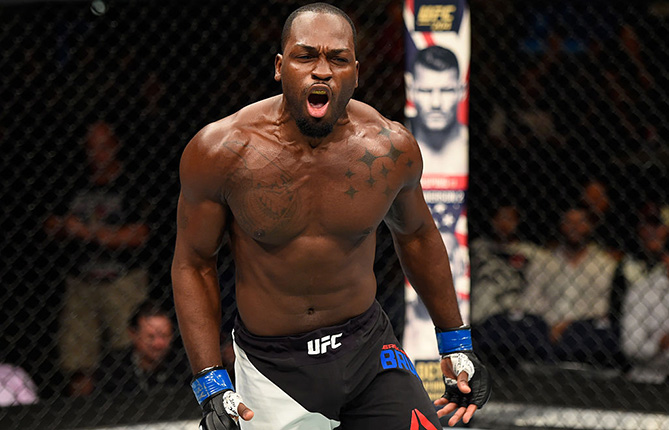 “I’m not even worried about that fight. In my mind, that fight never occurred,” laughed Brunson, referring to his August 2012 bout with Souza under the Strikeforce banner that ended in a first-round knockout win for the Brazilian. “I was very green in the sport and I was ahead of schedule.

“I had to fight the top guys because I was going out there and steamrolling everybody, even though my skills weren’t up to par back then, so this is a whole different ball game,” added Brunson, who was just two years removed from his professional debut when he shared the cage with the far more seasoned Souza. “Now my skills are up to par and I still have that steamroller mentality.”

With a pair of first-round stoppages victories carrying him into the rematch, Brunson believes that drawing level in his personal series with Souza in impressive fashion should have him in line for a title shot later in the year.

“If I go out here and waste the No. 3 guy in my division, I’m thinking that’s deserving of a title shot, especially being that you have the No. 1 and No. 2 going at it. I’m definitely carrying some title aspirations because the way I fight and the way I finish guys, that should definitely bring me a title shot, for sure.”

And potentially earning that opportunity on home soil will make it even sweeter.

“It’s going to feel great,” he said of the possibility of punching his ticket to a championship opportunity in Charlotte. “It means a whole lot, so when I go out there and get the job done and I’m able to raise my hand, hear the crowd get behind me, it’s going to be a great feeling.”