Brunson ready to start new streak against 'The Spider'

When he was slated to face off with fellow surging middleweight Robert Whittaker in Melbourne last November, the 32-year-old was arguably the hottest fighter in the 185-pound ranks.

After entering 2016 on a three-fight winning streak and quietly putting together a solid 5-1 record through his first six appearances, Brunson added first-round knockout wins over Roan Carneiro and Uriah Hall to his resume, pushing his winning streak to five with four straight first-round stoppages. The victory over Hall catapulted him into the Top 10 and, with the championship picture a little murky, Brunson started thinking about where a sixth straight win – and fifth consecutive finish – could put him in the middleweight hierarchy.

Looking too far ahead cost him.

“(I was) just too impatient,” Brunson said, reflecting on his first-round loss to Whittaker. “I was trying to be greedy and falling in love with the knockout – really wanting to get it done and really wanting to lobby for a title shot if I could knock 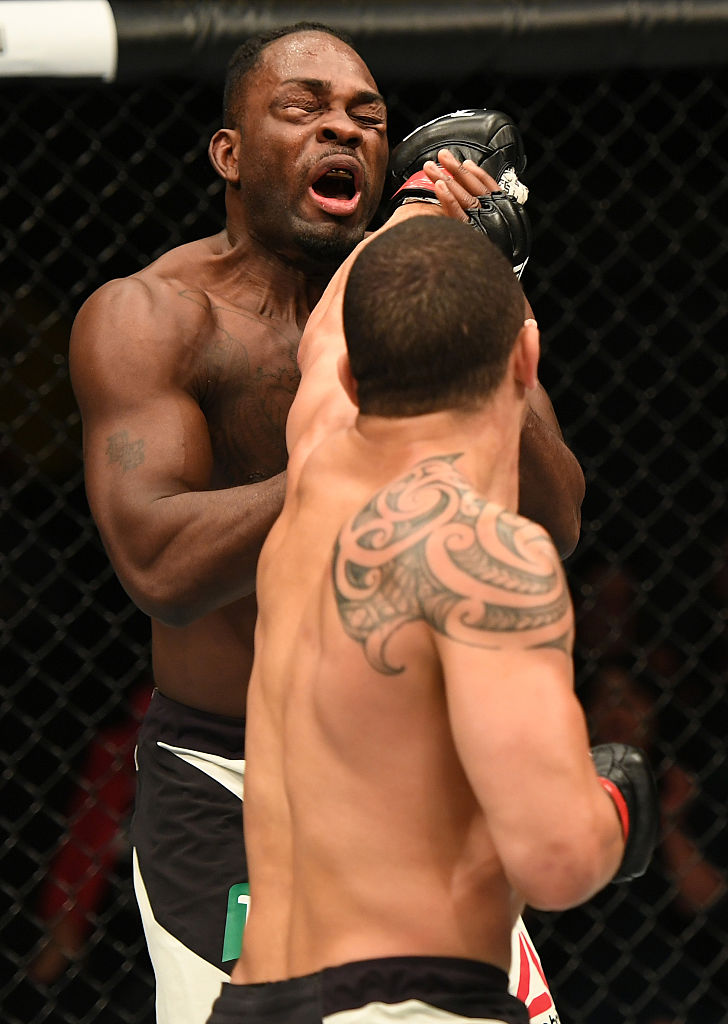 him out in the first round because I’m thinking five first-round knockouts in a row, nobody has ever done that in the UFC; that’s pretty impressive.

“We’ve got some of the best guys in the world at middleweight in the UFC, so I was really trying to impress for that title shot too much instead of letting the fight come to me.”

Despite lasting just over four minutes, the back-and-forth bout was entertaining enough to take Fight of the Night honors, but collecting a bonus didn’t make up for the disappointment of catching a loss and it sent Brunson back to the gym keen on starting another winning streak the next time he steps into the Octagon.

“My streak is gone, so it’s time to build another one,” said Brunson. “The streak was nice, but it’s gone now, so now it’s reset time. One of the things that I need to do in my fight that I could have done in the Whittaker fight is reset.

“When I was bombing on him, he was covering up pretty well and I could have reset. That’s pretty much how I’m approaching this new streak that I’m trying to start. Just trying to reset, refocus and pile up another streak.

Brunson has the opportunity to kick off his new winning streak in style when he squares off with Anderson Silva in the co-main event of UFC 208 Saturday night at Barclays Center.

While the bout came together on short notice, leaving Brunson limited time to prepare for a date with the long-time middleweight champion, the chance to share the cage with “The Spider” and bounce back by beating arguably the greatest fighter of all-time has the charismatic middleweight contender excited heading into this weekend’s event.

“To come in here and beat a guy like Anderson Silva puts me right back on schedule,” said Brunson, who was unable to make his customary training camp trip to Albuquerque to work with the team at the Jackson-Wink MMA Academy. “I would have liked a little more time, but hey, I’m sure he would have too. We’re both going to go out there and mix it up.

Rather than licking his wounds and lamenting a lost opportunity, Brunson has left the loss to Whittaker in his rearview mirror, recognizing where he made mistakes and working to correct them as quickly as possible, with designs on making an expedient return to title contention in 2017.

“I think that fight made me recognize some of the things I’ve been able to get away with in my previous fights,” Brunson said, reflecting on the performance against Whittaker and the adjustments he’s made since. “I’ve been getting better with my striking – I’m a phenomenal striker - but sometimes I get a little impatient and when you get impatient, it puts you off balance.

“After this previous fight, all I’ve been focusing on is taking my time, making sure my levels are low, I’m not getting too high. When I got the call for the fight with Anderson, that has been my whole focus – making sure I’m not getting extended and keeping my chin down, which is going to keep my power there and actually make me hit guys even harder.”

Brunson isn’t the first fighter to fall in love with his striking and he certainly won’t be the last, but the talented knockout artist has identified his mistakes and is eager to get back in the Octagon and return to his winning ways.

And doing so with a victory over one of the most decorated fighters in UFC history sounds perfect to him.

“That’s a great start,” Brunson said of beginning his 2017 campaign with a win over Silva. “He’s the guy in front of me, so that’s the plan, for sure, to go out there and have Anderson under my belt.

“He’s a big name – the biggest name opponent that I’ve fought, the most veteran guy that I’ve fought – so to go out there and beat him would put me right back on schedule and that’s what I’m looking to do.”