Brunson to let fight do the talking, then he'll make noise 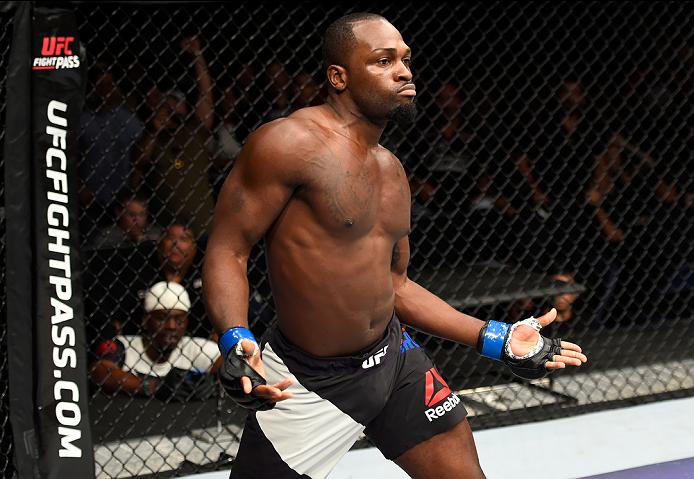 It’s been a crazy year in the middleweight division. Just ask Derek Brunson, who is the prime example of how much of a rollercoaster ride it’s been since Michael Bisping defeated Luke Rockhold for the UFC’s 185-pound crown.

At the time of that fight on June 4 of last year, Brunson, who faces Daniel Kelly in the co-main event of UFC Fight Night Auckland this weekend, was on a four-fight winning streak that included three knockout victories. He would add another finish in September when he defeated Uriah Hall, but then a wild Fight of the Night brawl with Robert Whittaker left him with a loss, ending the streak at five, and in February, he lost a highly controversial decision to Anderson Silva.

“It’s been a little rough,” Brunson chuckles. “I had five wins in a row, I was on that nice streak and working towards that title shot and I was really close. So I went down to that fight in Australia (against Whittaker) thinking that if I made a statement there, I could get the job done. And then I fought Anderson on short notice to rebound and the decision was just ridiculous. I don’t even like talking about it.”
More from Fight Night Auckland: Hunt still loves fighting | Auckland Fantasy Preview | Lewis just one punch away

That’s an understandable sentiment, as Brunson seemingly controlled the fight with the former middleweight champion at UFC 208 before the judges came back with a unanimous decision, one judge even giving Silva all three rounds.

“No matter how exciting or less exciting it was, you go to a decision and have a winner, and I thought there was no way that you give Anderson that fight with our scoring criteria,” said Brunson, who went from being on the verge of a title shot to now entering Auckland on a two-fight losing skid. But his plan to get back on track is a clear one.

“It (the last two fights) was frustrating for sure,” he said. “I put in a good camp for this one, and I know I’m the best middleweight in the world. But knowing it and proving it are two different things. And if you’re going off the last two fights, if somebody didn’t see the fights, they’re just going to see the result. So the frustrating part is about staying composed and not trying to prove everything in one fight. You have to chip your way back to where you want to be at. That’s the mindset I have right now.”

The first step on the way back is beating Kelly, the man who has singlehandedly become the hero of those fans over 35 who were looking for a fighter their age to back. Brunson isn’t worried about those fans being in attendance at Spark Arena this Saturday.

“Not really,” he laughs. “None of them are coming to help him, so the crowd won’t affect me too much.”

This is an important matchup though, and Kelly is proving to be a nightmare matchup for his opponents, as he’s won four in a row, most recently beating former world champion Rashad Evans in March. And though Brunson is the favorite, he’s not going to overlook the Aussie battler.

“I’m expecting a good fight, and I understand that everybody’s going to give it their best fight,” he said. “I’m sitting in the eight spot, he’s sitting at 15, he may be somewhere up for renegotiating his contract, so he’s putting in good camps and not taking it for granted. He’s been getting past young guys, seasoned guys, former UFC champs, so I know he’s gonna show up.”

Brunson is showing up too, and when he’s on his game, he can do it all. That makes him one of the most dangerous middleweights in the UFC. But he’s not letting his talent or what’s happened in the last two fights dictate what happens against Kelly. He’s letting the work speak for itself. Then when the fight is over, that’s the time to talk.