After a fairly even opening two minutes, Carneiro missed wildly with a right hand and fell to the mat. Pinned against the cage, Carneiro took a series of unanswered blows, but referee Keith Peterson gave him ample time to recover, and it looked like did, as he eventually grabbed hold of Brunson’s hands. But the North Carolina native kept working, and he found the space to start throwing again. This time, there would be no second chance for Carneiro, who was stopped via strikes at the 2:38 mark.

Ohio native Cody Garbrandt was disappointed when fellow bantamweight up and comer John Lineker was forced out of their bout due to illness, but he still got a fight in front of his local fans and he delivered, knocking out late replacement Augusto Mendes in the first round.

The bout was fought at a catchweight of 142 pounds.

With the exception of a brief early sequence on the ground that Garbrandt wisely got out of, the first round was fought on the feet, and that proved to be the downfall for the decorated Brazilian Jiu-Jitsu black belt, as he stuck around long enough to let Garbrandt find his range, and when “No Love” did, it was game over, as a quick combination with under a minute left sent Mendes down to the canvas hard. Garbrandt raised his hands in celebration, but the fight continued for one more strike before referee Mario Yamasaki stopped the bout at the 4:18 mark.

Number eight-ranked featherweight contender Dennis Bermudez figured out a tricky style matchup with Japan’s Tatsuya Kawajiri and got stronger as the fight progressed, outpointing the 12th-ranked Kawajiri via unanimous decision.

Ibaraki’s Kawajiri (35-9-2) used his size and strength to its best advantage in the opening frame, as he controlled matters on the ground for much of the round.

There was more of the same from Kawajiri in the second, as he refused to let go of Bermudez once he locked up with him, but this time, the New Yorker pounded away with several hard strikes to the head, and since it was the only effective offense delivered in the round, it was easy to score the stanza for Bermudez.

Whether with his wrestling or striking, Bermudez (16-5) pulled away in the final round, allowing him to snap his two-fight losing streak once the bout went to the judges.

Middleweight prospect Chris Camozzi expressed his desire to finish fights in his third stint in the UFC, and he got that quest off to a rousing start with a first-round knockout of Joe Riggs.

Camozzi wasted no time getting down to business, jarring Riggs with a right hand that forced Riggs to cover up. After a couple punches, Camozzi began firing knee after knee at Riggs until the Arizona veteran fell to the mat with a broken forearm. Referee Mario Yamasaki stopped the fight 26 seconds into the opening stanza. 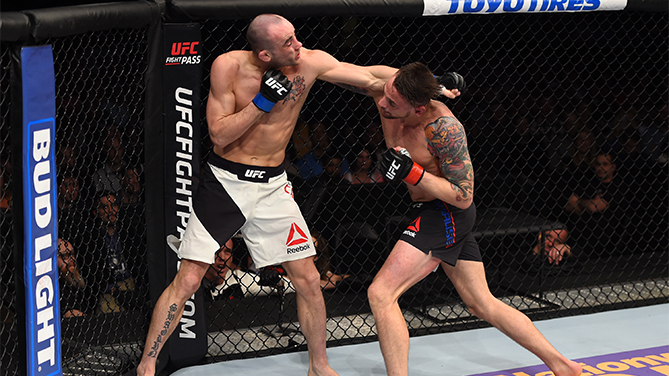 A fast-paced first round showed off a little bit of everything, Krause pressing the action behind a varied striking attack, Campbell coming back late in the round with strikes of his own, and finally, Krause nearly finishing the fight with a rear naked choke just before the horn.

Campbell got the bout to the mat to start round two, Krause looking for submissions from his back before scrambling to his feet. In the second minute, Krause dragged the Canadian to the canvas and took his back again, but Campbell scrambled his way out of trouble and put the fight in the stand-up realm once more. Campbell tried for a choke of his own, but Krause escaped and landed in the top spot as the round ended.

The back-and-forth action continued in round three, Campbell nearly finding a choke again, but Krause getting free. The Lee’s Summit product wasn’t able to get off his back though, with Campbell landing several hard ground strikes in the closing moments.