At this point, Bruno Silva should probably just set up shop at the UFC APEX, as the middleweight prepares for his fourth Las Vegas fight night — and third at the APEX — this weekend.

“I’m happy to come back here for the fourth time in less than nine months. The wifi is already connecting by itself here; I'm at home,” Silva said with his now-familiar smile in his fight week interview with UFC.com ahead of UFC Fight Night: Santos vs Ankalaev.

While the comfort of fighting in a familiar arena is a plus, it doesn’t mean “Blindado” feels any level of complacency heading into his fourth UFC fight after a debut delayed by two years. 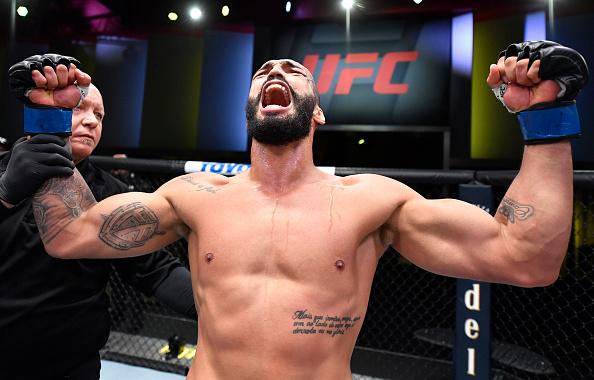 Bruno Silva of Brazil reacts after his TKO victory over Wellington Turman of Brazil in a middleweight bout during the UFC Fight Night event at UFC APEX on June 19, 2021 in Las Vegas, Nevada. (Photo by Chris Unger/Zuffa LLC)

“I have to confess that it's really nice when the place is familiar, fighting in the same venue,” Silva said. “When that doesn't happen, it doesn't make much difference, but if I had to choose, obviously in the same place (is better). You’re already used to the energy.”

At the end of the day, though, it doesn’t matter where — or especially who — Silva is fighting, as the job for him is as simple as signing on the dotted line is.

“When the fight (against Alex Pereira) came up, I didn't think twice and I accepted right away. I didn't even know his reasons, and then he clarified it,” Silva said, explaining how Pereira told the media he preferred to fight him instead of Krzysztof Jotko due to Silva’s entertainment value. “But, for me, it made no difference. The fight was offered, and it was accepted. That's all.”

Pereira, a two-division Glory kickboxing champion, made his debut in November, notching a second-round flying knee knockout over Andreas Michailidis in Madison Square Garden. Regardless of the hype and momentum that follows the Glover Teixeira-trained talent into this match, Silva believes his experience as a mixed martial artist could make the difference.

“In theory, yes. In practice, I don't know. But in MMA, we are more specialists. My team specializes in MMA,” the 32-year-old said. “He was an expert in Glory, but I've been an expert in MMA for many more years, with a lot more fights and a lot more baggage. I've been through a lot in the Octagon, so pretty much nothing is new to me anymore.” 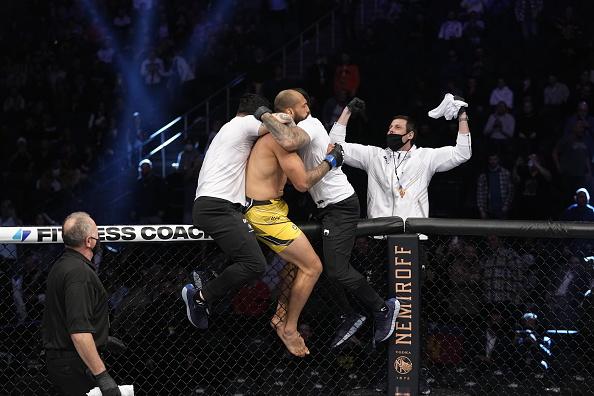 Bruno Silva of Brazil celebrates after defeating Jordan Wright in their middleweight bout during the UFC 269 on December 11, 2021 in Las Vegas, Nevada. (Photo by Jeff Bottari/Zuffa LLC)

While Pereira’s kickboxing experience and unpredictability pique the interest of many, it’s important to remember what Silva has become known for: brutal ground-and-pound and savage finishes that can come at any moment — especially in his last two outings, which earned him performance bonuses.

“Today, as a family man, it helps much more. I can raise my daughter, I can focus more on my career, and have better finances,” the Brazilian said of earning two performance bonuses in just two months to close out 2021. “The main thing is knowing that night I had a great performance and the UFC recognized it. It's something else on my resume.”

Now that Silva has earned regular recognition from the organization, he hopes to continue to perform in a way that makes him a more of a household name among MMA fans. 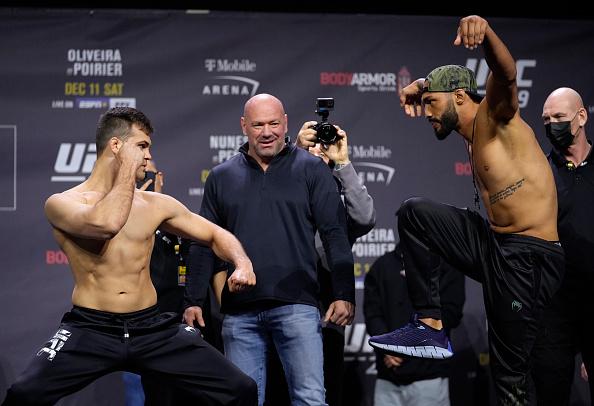 Like we said, for Silva, it’s simple. Sign on the dotted line, show up in Las Vegas, perform, repeat. When he can, maybe he throws in a dance move or two with Bruce Buffer — anything to show his authentic self.

“I don't have to be an idiot to be good at kicking a***. I don't need to curse on people, I don't need to do this new demigod profile. I am very happy that I receive affection from people who like me as I am,” Silva said. “I like to be exciting. I want to convey emotion and I want the fans to want to watch it. I'm a guy who lives life; it's a privilege to live every day, and I'm doing what I love.”