For 25 Years, Bruce Buffer Proudly Lives Up To Being Tabbed As 'The Voice Of The Octagon'
By Thomas Gerbasi, on Twitter @tgerbasi • Mar. 19, 2021

When Bruce Buffer steps into the Octagon on Saturday to announce UFC Fight Night in Las Vegas, it’s not as the man who has been doing this for over 25 years. In his mind, it’s the first time, and he’s looking to secure a gig.

“I've said it before and I'll say it again: every night I walk into the Octagon, it's my very first night, and that's what drives my passion,” said Buffer. “And when my passion wanes, I am going to retire, and you'll know it's because my passion has waned. So when I walk out there on show night, it's the same as when I walked out February 16th, 1996, although my voice is a little better. (Laughs) I go out there to throw everything into it to prove to everybody, especially the fighters and myself, that I deserve this job. And that's what drives me. You'll never hear me talk about past shows. I've had memorable moments, but I go out there every Saturday night to prove that I deserve this job.”

When he says that, it almost reminds you of the Beatles’ famous rooftop concert in 1969, where John Lennon famously told those filming after the final song of their final gig together, “I hope we’ve passed the audition.”

It was obviously a joke from Lennon, but the attitude that every event is an audition and a chance to prove himself is a serious thing for the 63-year-old, who brings more energy than John, Paul, George and Ringo in their heyday to every bout he announces. 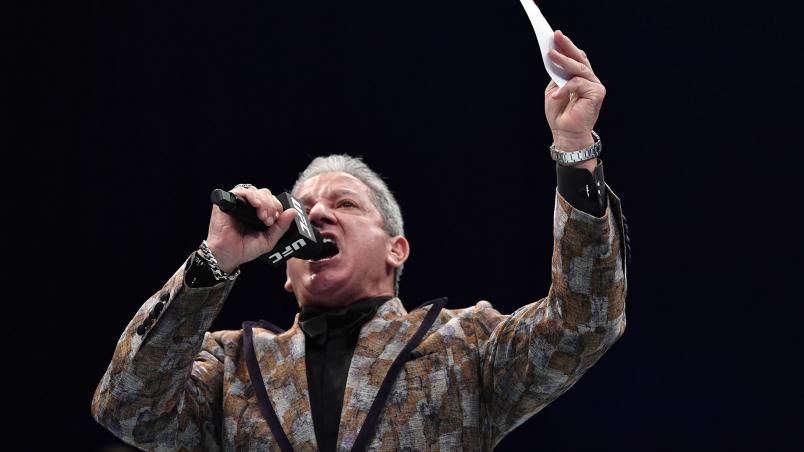 And if we’re going into a moment from the past that reflects his approach, baseball legend Joe DiMaggio was once asked why he played so hard in a meaningless late season game. His reply: “Because there's always some kid who may be seeing me for the first time. I owe him my best.”

So why does he do it for every fight from the prelims to the main event?

“If you watch me, I'm always looking into the eyes of the fighters and it drives me to give everything I have because they have spent eight to ten weeks training for this defining moment,” he said. “They spent many years of their lives to get to this moment. They deserve every bit of energy, lung power and passion I can give them in their introduction.”

That passion doesn’t go unnoticed, by the fans, but especially by the fighters, some of whom have waited their entire career to be introduced by the “Voice of the Octagon.” 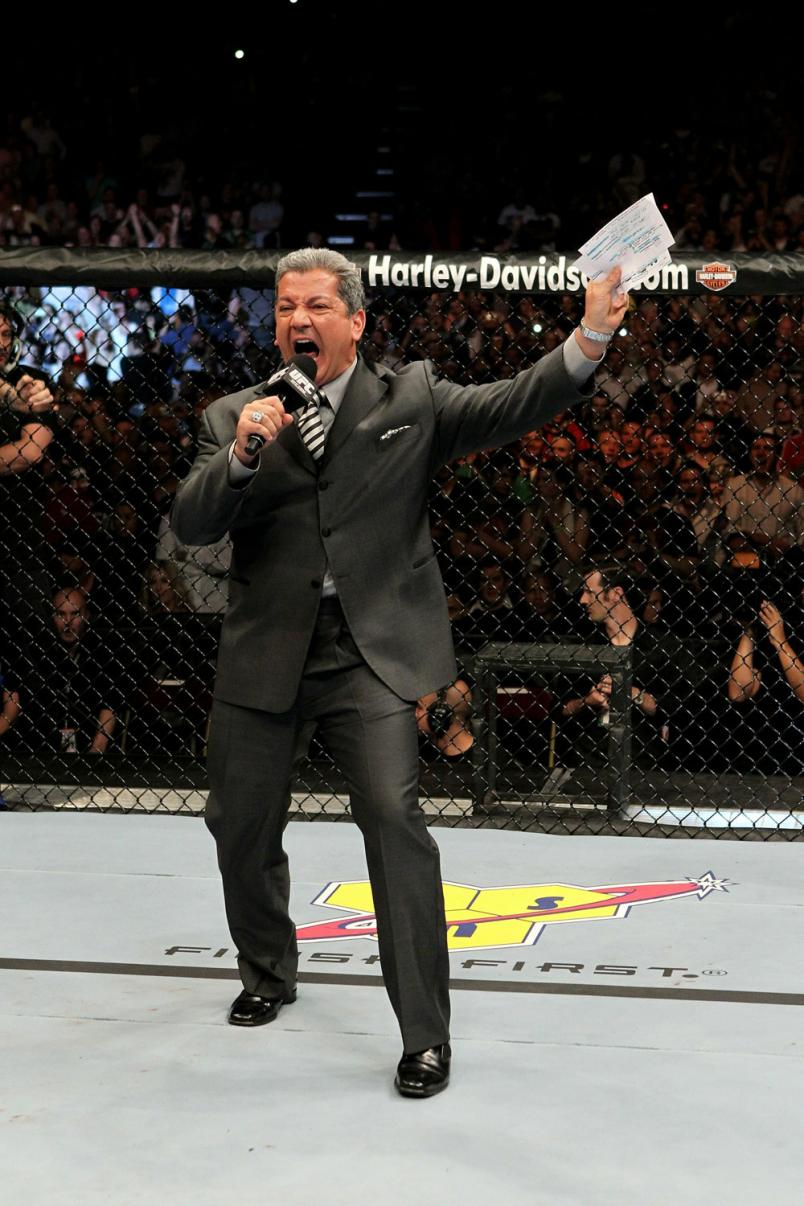 “It means a lot to me when a fighter comes up to me and expresses to me how I enhanced their moment or they can't wait for me to announce them,” Buffer said. “That's a defining moment for me; that means I'm doing my job. It means that everything that I put into this job for 25 years is paying off, and if I can raise that level at that moment for the fighter, it's the highest compliment I can receive. The other highest compliment I receive is when I'm stopped by a kid for an autograph or a picture.”

Buffer recalls two seminal moments from his childhood that stuck with him. One was when he called out to John Wayne after the premiere of the film, True Grit, “Hey, Duke.”

The other hit even closer to him given his relationship to combat sports.

“I was five years old, and my brother Brian and I were with my dad in a hotel in Philadelphia,” he recalls. “A tall man walked in who I recognized from TV and my dad said, 'Go say hi to him.' We said hi to him and he spent ten minutes with us talking to us. And it had an effect on me for the rest of my life. That man's name was Muhammad Ali. It wasn't Muhammad Ali back then, it was Cassius Clay. But that was a defining moment for me. So when a kid stops and wants to talk to me or take my picture, this is a moment to have an effect on somebody. This is why I try to be the best role model I can be, because it's not just about the fans watching who are 30, 40, 50, 60 years old. We have a duty to be role models to these young people watching us and to be the best we can be. And I truly live like that.” 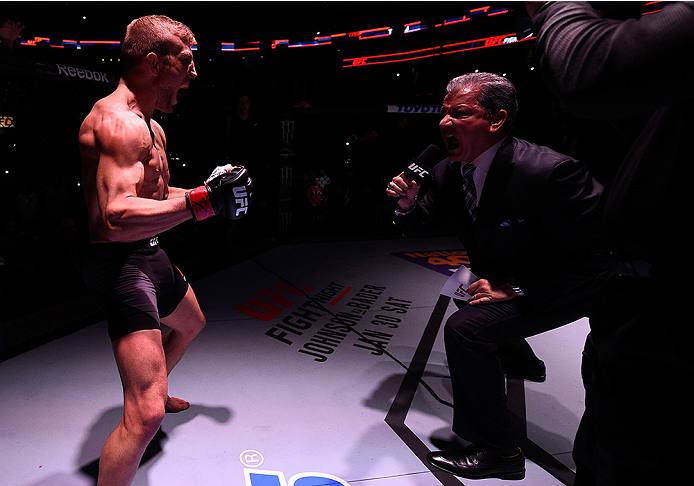 BOSTON, MA - JANUARY 17: TJ Dillashaw (L) is introduced in the Octagon by Bruce Buffer before his UFC bantamweight championship bout against Dominick Cruz during the UFC Fight Night event inside TD Garden on January 17, 2016 in Boston, Massachusetts. (Photo by Jeff Bottari/Zuffa LLC/Zuffa LLC via Getty Images)

It's why Buffer is not only respected for his work on fight night, but for being one of the good guys of the sport. He’s not a bad businessman either, as his work with his brother, Michael, has been well documented, and with the release of his Puncher’s Chance bourbon being a big hit, and the It’s Time line of cologne, toiletries and energy products hitting shelves this spring, it’s a good time to be Bruce Buffer. But there’s no better time for him than when it’s time to announce two fighters before the biggest night of their life.

“The show's not about me,” he said. “What I'm proud about is that I'm recognized for the effort and the passion I put into my job, that I'm recognized as the 'Voice of the Octagon,' and that I've held this position for 25 years. All I want to do is leave my mark and be respected for what I did and the fact that I gave 150 percent every night.”