Not too long before he tied the record for most UFC light heavyweight title defenses, Jon Jones was just an excited young man in Las Vegas. Bruce Buffer recalls the night of UFC 126 in this excerpt from his memoir "It's Time," available May 14. (Click here to pre-order.) 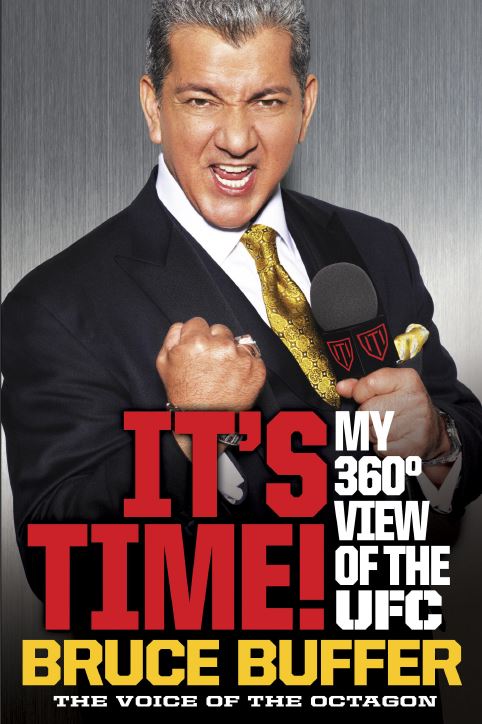 The night of UFC 126, I was leaving the after-party at XS, a Vegas nightclub, at 3:00 a.m. As I was walking through the lobby of the Encore Hotel, I saw the fighter Jon “Bones” Jones trot in at a full clip, frantically looking around.

He explained that he needed to pay his cabdriver. “I don’t have any cash,” he said. “I’m looking for an ATM.”

“Come with me, Jon,” I said, throwing my arm around him. We walked out into the cool night. The cab was parked in front, engine idling, the driver looking annoyed and impatient. I rapped on the window and peeled off a few bills. Sent the guy on his way. I turned to Jon and slipped a hundred-dollar bill in his front shirt pocket.

I turned and looked at the six-foot-four-inch man who, just tonight, had won the $75,000 Submission of the Night bonus after taking out Ryan Bader in the second round with a choke that resulted in a tapout. It was Bader’s first loss, and Jon was a rising star; in six weeks he would be challenging Mauricio “Shogun” Rua for the light-heavyweight championship. If he won, he’d be the youngest light-heavyweight champ in UFC history, only twenty-three years old. (News flash: He did.) 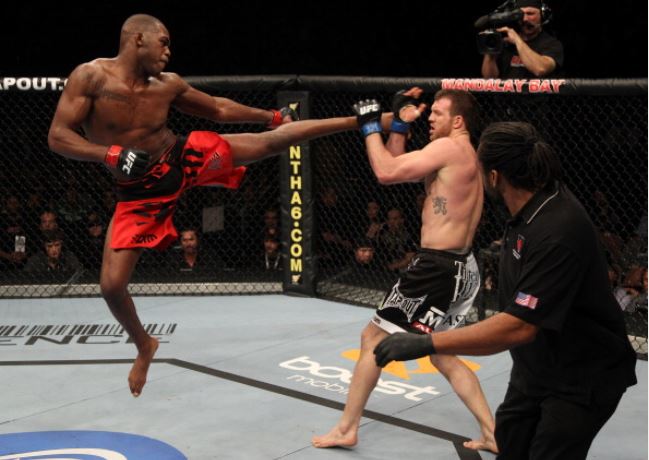 “Look, Jon,” I said, “you just won a main card event. It’s a fight night, and there are fans all over the city. You are not to go walking around Vegas alone by yourself, without cash, without your crew, you hear me?”

I love Vegas. Know it like the back of my hand. But I’ll be the first to say that you need to stay alert there, the way you would in any big city. Especially if you’re highly recognizable.

I know fighters well enough to know that they are often so exhilarated on a fight night that they can’t sleep. On that night, Jon’s victory over Bader was still so fresh he could taste it. It was 3:00 a.m., but Jon could probably have stayed up till noon the next day. All he wanted to do was have some fun until he worked off that high.

Some people were coming up out of the lobby now. Some of them were my friends. “We’re heading out to another party,” I told Jon, waving over his shoulder to our limo driver. The sleek black ride pulled up. “Come out with us.”

As the limo pulled away from the curb, I made a mental note to talk to Jon’s manager about this. But for now, the night was still young.

I’ve been telling people for a while that my young friend Jon “Bones” Jones is a new breed of fighter. He’s a whirling dervish in the Octagon, a spinning tornado of elbows, knees, and feet. He’s got the longest reach of anyone in the organization. A well-proportioned, wonderful freak of nature, as so many great athletes are. 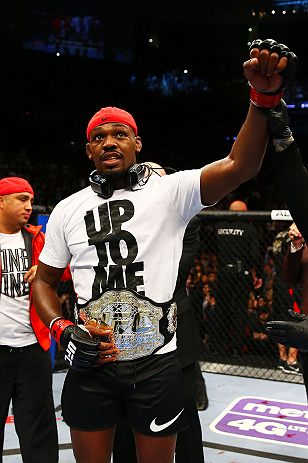 I started telling people that Jon would someday be the Muhammad Ali of the UFC, and critics knocked me for it, but I’ll stand by it. Ali in his prime had a devastating wit and was a master of psychological warfare, but he also charmed millions of people because he had what Jon has: charisma. Jon’s a gentleman outside of the Octagon, and a cyclone inside it. His technique is indescribable, graceful, yet stylized. He pulls off moves that you only see in the movies. Actually, they’re better than the movies because he’s accomplishing real damage.

Being in his early twenties, he’s still got some maturing to do, as both a man and a fighter. but he’s luckier than a lot of the fighters who came up in the UFC only a decade ago. First, he practices the sport in a whole new way. Second, he’s in the right place at the right time. The 2011 Fox deal propelled the sport to new heights and exposed it to millions of new fans. The UFC’s gone mainstream, and Jon’s in the perfect position to reap some of those benefits.

Another thing Jon has in his corner is a loving family. His dad is a Pentecostal minister in upstate New York; Jon was a church choirboy while growing up in this deeply religious family. He was the middle child, and though he wasn’t exactly a shrimp, his older and younger brother were also tremendous athletes. Both played football at Syracuse. Arthur’s now a defensive end for the Baltimore Ravens; Chandler was selected in the first round of the 2012 NFL draft by the New England Patriots.

So I don’t really see any weaknesses in Jon’s armor, save a hint of innocence. That’s why the night I saw him alone in Vegas rubbed me the wrong way. People think I make too big a deal about fighters needing protection. Obviously, Jon can handle himself against anything life hurls his way, and his management team can’t be there to protect him all the time, but a champion has bigger things to do than look for an ATM machine or guard himself against drunk idiots. 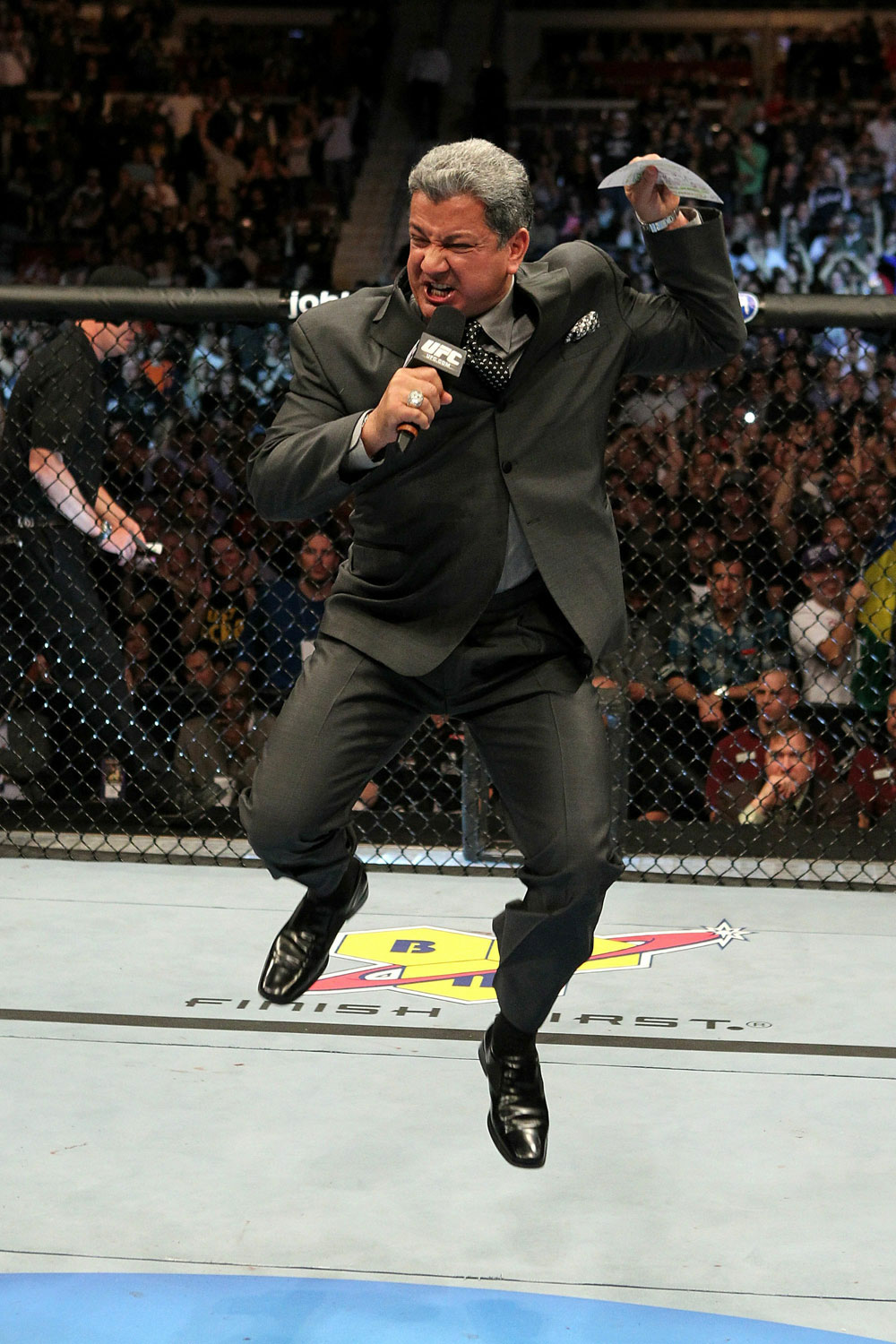 If you think I’m exaggerating, I should tell you that when the limo pulled up that night in front of the Encore, I got in first with my friends. Jon lingered on the sidewalk. “Jon,” I said, “come on. Get in.”

He did. And the second Jon pulled the door shut—the very second—someone in the crowd outside the hotel threw a punch and knocked a guy to the ground exactly where Jon had been standing a few seconds ago.

Jon looked at me, stunned.

“We should go,” I told the driver, who hit the gas.

Life can change fast on fight night in Vegas. When the parties start winding down, drunk people suddenly find themselves bored and looking for something to do. You’ve got a lot of testosterone flowing. Someone mouths off, and boom, someone takes it in the jaw. If that’s going to happen, I’d rather it happen to someone else, not one of our guys. They don’t need that headache, and they don’t need that publicity.

Excerpt from "It's Time" by Bruce Buffer published on ufc.com with permission by Crown Archetype, an imprint of Random House