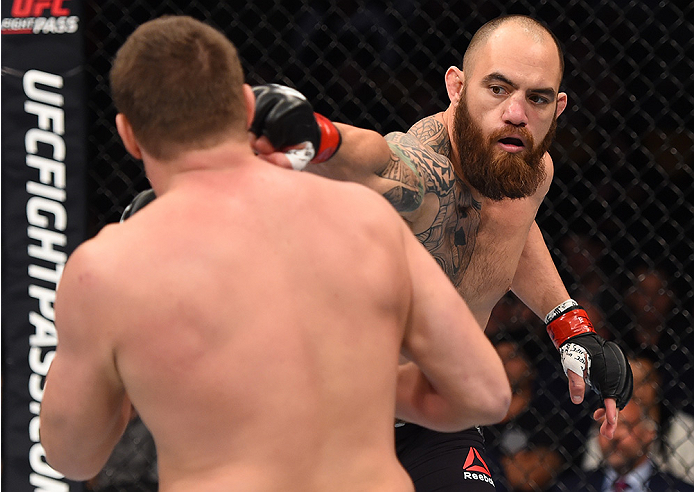 Travis Browne has heard the criticisms, many of which have come from the same people that were singing his praises and heralding him as the future of the heavyweight division as he scaled the rankings.

Two years ago, a trio of first-round stoppage wins put the 34-year-old on brink of a title shot. Now he’s ranked No. 9 in the UFC’s big boy division, one spot behind the man he’ll face this weekend in Halifax, Derrick Lewis. Through it all, the athletic Hawaiian has been paying attention, listening to everything that has been said and shaking his head in amusement.

“People keep forgetting that I’ve been in this sport a total of eight years and seven of them have been in the UFC,” said Browne, who made his pro debut in February 2009 and entered the Octagon for the first time 16 months later. “I wasn’t training 10, 15 years ago. I was playing basketball. I was doing other s**t. I started competing and then a year later, I started competing against the best in the world.

“There’s a reason people will have highlight reel knockouts or submissions and then they get up to the top tier and they start going to decisions or things don’t go their way. In my last two fights, I fought the No. 1 and No. 2-ranked guys in the world. Both of them held straps at a time. I’m fighting literally the best of the best.”
RELATED: Free Fight - Browne vs Barnett | Reasons to Watch | Fantasy Preview

Last time out, Browne stepped up on short notice at UFC 203, filling in for Ben Rothwell in a rematch with Fabricio Werdum, the man who halted his meteoric rise up the rankings and kicked off the current 2-4 stretch that has many counting “Hapa” out as a heavyweight contender.

Early in the first round, Browne looked down at his hand and called for a break in the action.

“I’m telling the doctor to put it back in and he’s like, ‘No, I can’t,’ so I try to pull it back in myself. I’m trying to get up off the mat when he knocked me down and I can feel the canvas scraping on my bone and it feels like sandpaper. S**t happens; it’s the fight game.”

As much as he’s quick to point to his gnarly finger as part of the explanation for why things didn’t go his way against Werdum in Cleveland, Browne is also deeply introspective and honest about his rapid rise and current standing in the heavyweight ranks.

He admits to getting by solely on his athleticism early in his career and struggling to combine the various skills and techniques that make up this sport at times when he steps into the cage. In recent fights, he’s been getting stuck in his own head, focusing almost exclusively on whatever he was training in advance of his fights rather than using his full complement of skills and failing to fight to his full potential.

“Here’s the way that I have to put it: I’ve been in Vegas working with Ricky Lundell, Ray Sefo,” began Browne. “Ricky just had his team go through the wrestling State Finals and all that kind of stuff. His 17-year-old junior, he went back to defend his title – he won the State championships last year – and he ended up losing. The only reason he lost was because he was in his own head and he didn’t go out there and perform. This kid is learning this lesson at the age of 17 in one-on-one combat and I’m learning it at the age of 34 in front of millions of people on the biggest shows. 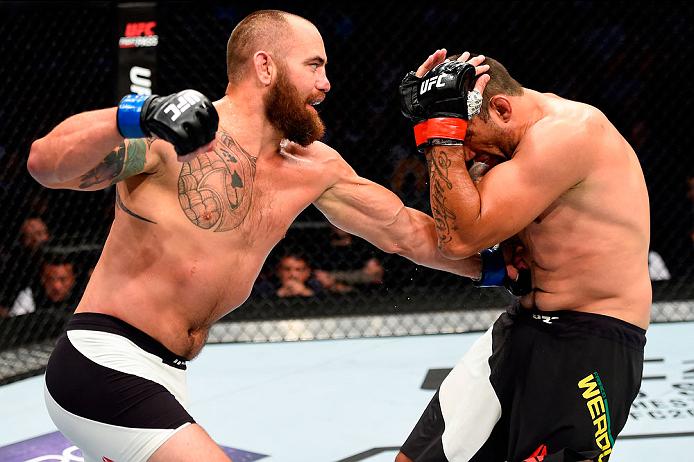 “I’ve been in the room with some of the best in the world and a lot of them have so much experience with one-on-one combat that they can go, work on just their wrestling and they already know where they can implement it into their MMA game plan,” continued Browne, who has previously trained at Alliance MMA in San Diego and with the Jackson-Winkeljohn crew in Albuquerque. “For me, I have to learn that aspect, but then do it in MMA because I don’t have that same level of experience.

“So, for me, it’s about going out there and implementing it during my training camps and practice. It’s about putting it all together and about getting it done and getting back into the swing of things and being an athlete again.”

That’s why he’s excited about the prospect of sharing the cage with Lewis and not too concerned with what the critics have to say.

“Derrick is a dangerous dude; he just is,” he said of Lewis, who enters Sunday’s contest on a five-fight winning streak. “He’s kind of like the hungrier fighter coming up and I’m the old dog and he’s trying to knock me off the pedestal, but it doesn’t matter. Everything that everybody tries to hype up doesn’t matter.

“At the end of the day, Travis Browne is getting in there with Derrick Lewis and we’re going to scrap and the hype and all that kind of stuff, I don’t care; I never did. I’m just going to go out there and fight with this dude and he’s going to sleep.

“I’m going to knock his ass out and that’s going to be it.”