"I want us to put on a fight for the fans where they walk away from it
and say that watching that fight made this card worth it." - Travis Browne 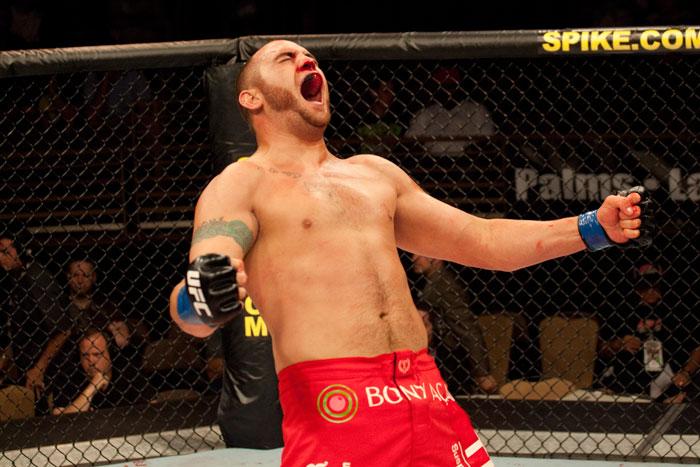 If Kaleo, 4, and his younger brother Keawe, 3, were asked, what does their dad do for a living? Their dad says their response would be, “To them, daddy is a superhero and he goes and beats up the bad guys.”

While not entirely correct, one could see how they might get that impression, as their father is the 6-7, 250 pound recent “Knockout of the Night” winner Travis “Hapa” Browne. It’s a thin line these UFC heavyweights are walking between being ginormous athletic wonders battling it out in the Octagon and being comic book superheroes. Browne’s last fight certainly didn’t help with the confusion as he knocked out the 6-11 Stefan Struve with a “Superman punch” in the opening round at UFC 130.

“I hit way too hard,” states Browne. “Watching his fights, he gets touched a bit in the first round. Watching who he has fought, who he has survived against and who has stopped him, I knew that once I got a hold of him and once I hit him hard he wasn't going to be able to survive it. I was just waiting for my time to connect and I did and I hurt him. The combination I threw before I threw the Superman punch, I dinged him up a little bit when I clipped him. I knew he was going to try to come in and he was getting desperate at that point.”

The victory over Struve was even more gratifying for the Hawaiian especially coming off Browne’s previous outing at UFC 120 against Cheick Kongo. “I had to win and I had to put on a show because my last fight with Kongo was horrible,” admits the 30-year old, whose draw with Kongo last October is the lone fight on Browne’s pro record that he hasn’t won. “Being on the bench for seven months after my Kongo fight didn't sit well with me. I hadn't won since my James McSweeney fight and that's what we work for to get those W's. Going into the fight with Struve, I knew I had to put on a performance that people would never forget about and it ended up happening for me.”

Browne’s bout with Kongo was definitely his least entertaining, but it served as arguably the best learning experience for “Hapa” and his burgeoning UFC career. Browne is big, even for a heavyweight, and moves like a man half his size, dipping, darting, and throwing all that body weight into his punishing standup. At the same time, Browne is new to this sport, with only two and a half years of professional MMA experience under his belt and is currently competing with elite fighters in the Octagon. In the end, that matchup with Kongo might serve as the watershed moment for him as the fight which pushed him the most to become one of the elite.

“In my previous fights, I could go in there and just bully somebody with my size, strength and speed, so I didn't necessarily have to be that fighter I want to be and want to evolve into,” explains Browne. “When I fought Cheick, he's a big guy too and he's a veteran and the longer you spend in this sport you're not intimidated by people. He wasn't intimidated by my size and strength and it showed. He took a few of my shots and he didn't crumble under the pressure. It showed me that I need to be more prepared. A lot of it was my conditioning and my technical skills and a little bit of everything.”

Fast forward to UFC 130 and Browne is in mid-air decking the Dutchman Struve in the face for the knockout blow. “In my last fight, when I hit Stefan with that Superman punch I was as fresh as can be,” asserts Browne, who has finished 8 of his 11 opponents in the first round, so he knows how to start fights like a house on fire and, now, Browne diligently works on keeping that burn going longer. “I need to be able to hold that pace for all three rounds. I need to know when to take a moment to rest and when to explode and just to be smarter about my overall gameplan. It's definitely been something I have been working on a lot.”

The next challenger awaiting him is England’s own Rob “The Bear” Broughton at UFC 135 in Denver, Colorado. “He's a tough guy, he pushes forward the entire fight, he's got good boxing and from what I've seen he actually has a really good ground game,” tells Browne of the 15-5-1 Broughton, who is primarily seen as a boxer, but who won his debut against Vinicius Queiroz at UFC 120 by rear naked choke. “I think it's going to be a great fight for the fans. They're going to see me moving around trying to pick my shots and they're going to see him trying to knock me out or take me down. He's a highly underrated fighter and I'm not overlooking him by any means.”

Entering the cage for his fourth time, the fans should expect Browne to show off his increasingly dangerous striking, but he has kept his abilities on the ground thus far a mystery. “If it goes to the ground then I'll show off what I have, but I'm not trying to show to everybody in the division exactly what I got,” says Browne who has nine wins by KO/TKO, but actually got his start in MMA through Brazilian jiu-jitsu, an art in which he holds a purple belt. “Everybody has put me in the category of a striker or a knockout sort of guy, but they don't know anything about my ground game and I like it that way. I wouldn't mind surprising a couple people. If this is the fight that I have to show it, then great; if not, then I'll save it for another day.”

Browne has spiced up his training for Broughton by moving his camp from Alliance MMA in his adopted home state of California to Jackson’s MMA in New Mexico.

“For this fight with Broughton, I moved my camp to Albuquerque so that I could get the high altitude training that I needed to get in,” reveals Browne, who is training with the top tier fighters of Jackson’s like UFC 135’s main eventer and light heavyweight champion Jon “Bones” Jones, as well as renowned coaches like Greg Jackson and Mike Winkeljohn. “I respect coach Jackson a lot and he is seriously like a psychologist, not a coach. He gets in your head and he makes you believe you can do anything you want to do. The good thing with Jackson's camp and with other good camps out there is that we're all really here to help each other as well. We're all super intense right now and we're all getting our game faces on.”

At UFC 135 in the “Mile High City”, Browne will enter the Octagon against Broughton looking to keep that undefeated record alive and, also, to give the fans a fight to remember.

“I would love to have a three round war,” affirms Browne, who wants to give the fans their money’s worth and show what the heavyweight division is truly capable of. “I want to prove that I can go all three rounds and stick in there and move with the best of them and take punishment and dish it out. I like ‘Knockout of the Night’ and I like ‘Submission of the Night’, but I want to take that ‘Fight of the Night’. I want us to put on a fight for the fans where they walk away from it and say that watching that fight made this card worth it.”

If Browne walks out of UFC 135 with a win and a “Fight of the Night” bonus, there will be no argument from fight fans that for Browne’s sons, their dad is a superhero.