ORLANDO, April 19 – The momentum and the hype was all with Travis Browne leading up to his UFC on FOX main event against Fabricio Werdum at the Amway Center Saturday night. But as soon as the bell rang, the Brazilian veteran made it clear that he was not going to be denied, not on this night, and when the five-rounder was over, he convinced Browne as well, winning a lopsided unanimous decision to earn his first UFC title shot.

Scores were 49-46 and 50-45 twice for Werdum, who will now challenge Cain Velasquez for the UFC heavyweight title later this year, once the champion returns from an injury-induced layoff.

Browne looked for the home run immediately, missing with a high kick to the head. Werdum fired back with punches to keep Browne at bay, but it looked like “Hapa” was about to pull away when he put the Brazilian on the canvas and proceeded to fire away. Werdum fought his way out of trouble though, proceeding to take Browne to the mat. Midway through the round, Browne got back to his feet, firing front kicks from long range, and punches and knees when he got close. Werdum was unintimidated by his foe, ripping off a hard kick to the midsection and some punches upstairs, which Browne responded to with taunts and a kick to the head. With the Brazilian fans chanting, Werdum flurried in the final seconds of the round, certainly getting Browne’s attention.

Both fighters landed with hard shots as the second opened, the crowd roaring with each shot. Werdum then scored another takedown, working his ground game against the fence. After an arm triangle choke didn’t present itself, Werdum sought an arm briefly, landing with punches to the face the whole way. With 1:40 left, the Brazilian again tried for the arm, but Browne escaped and made it to his feet. As he pursued Werdum though, he stole a glance at the clock, clearly feeling fatigued after the frantic pace of the first two rounds.

After Browne began round three with a right to the face, Werdum chased his foe across the ring with a combination to the head, clearly feeling more and more confident with each blow. A spinning backfist by Werdum added to Browne’s woes, and the Hawaiian’s technique was getting sloppier as his gas tank emptied. Werdum, on the other hand, was smiling as he looked to be having the time of his life in there. Midway through the round, he unloaded another close range barrage on Browne, and though Browne got in some of his trademark elbows as Werdum looked for a takedown, “Vai Cavalo” shook them off and went back to work, mixing up his striking attack like he never has before.

The pace dipped slightly in the fourth, allowing Browne to get in a couple hard right hands and as well as catch his breath while Werdum took his foot off the gas. But the Brazilian didn’t stop getting his offense in, throwing flurries in response to Browne’s single shots.

Five minutes away from a title shot, Werdum stayed perilously close to Browne in the fifth, but he kept throwing, with stiff jabs and follow-up rights jarring Browne, who was game, but outgunned, his face a bloodied mask by the final bell.

Carmouche got on the board first with a takedown in the second minute of the fight, but it was 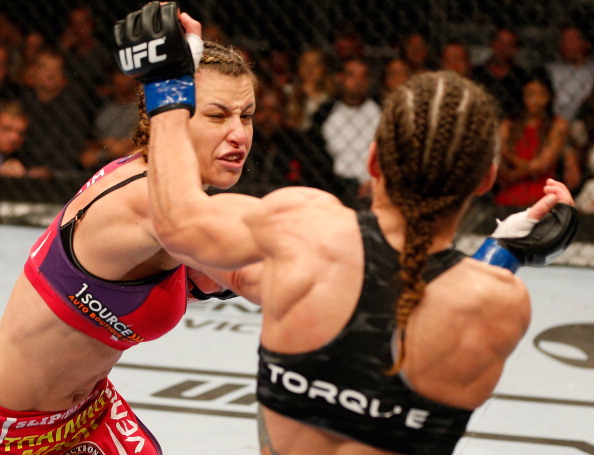 Tate who was the busier of the two as she sat against the fence before making it back to her feet. Carmouche remained locked on to her foe, searching for another takedown, and she got it with a little less than a minute to go. Again, Tate rose, but as she tried to lock up Carmouche’s arm, she was treated to a trip to the canvas before the bell.

After testing out her stand-up game, Tate tried the grappling side of things, but Carmouche wouldn’t let her get the takedown. Carmouche didn’t have such issues, as she put two more takedowns in the bank. Tate would rise, much to the delight of the crowd chanting her name, and as the two went back to the mat, Tate tried to sink in a guillotine choke, but wasn’t able to secure it.

Tate got her first takedowns of the fight in the first minute of the final round, and she worked hard to take Carmouche’s back. While there, Tate sought a rear naked choke, firing punches and elbows to get there.  With a little over a minute left, Tate sunk in the choke, and while Carmouche broke free, the strong third round sealed the fight for Tate on the scorecards.

The resurgence of lightweight action hero Donald Cerrone continues, as “Cowboy” shook off some bombs from the fists of Edson Barboza to drop and submit the Brazilian bomber in the midst a wild first round.

Cerrone’s plan was to get Barboza to the mat immediately. Barboza wasn’t interested in playing along, swinging with both fists to keep his distance. After both settled into a stand-up groove, Cerrone got his shots in, but midway through the round it was Barboza drilling “Cowboy” with right hands upstairs. Cerrone took the blows well though, and moments later, a left dropped Barboza to the mat. Cerrone pounced immediately, took Barboza’s back and sunk in a rear naked choke. The tap came seconds later at the 3:15 mark.

After moving to 4-0 in the UFC with a clear-cut three round unanimous decision win over Brad Tavares, Yoel Romero may have made the move from prospect to contender in the stacked middleweight division, not a bad result for the 36-year-old former Olympic Silver medalist.

After Tavares and Romero got to know each other by trading leg kicks, Romero went on the attack after missing a high kick, flurrying with punches and then taking the Hawaiian to the mat. Tavares shook off the onslaught, but once he got up, Romero responded with a thunderous slam. Again, Tavares rose, but the Cuban was attached to his back, leading to another takedown. With a minute left, Tavares broke Romero’s grip and fired off punches, only to visit the mat once more. 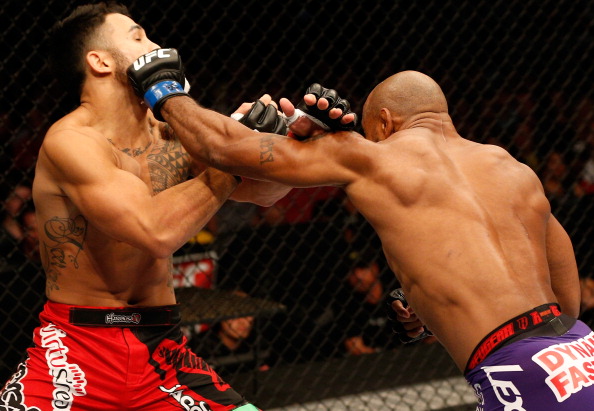 Romero took the bout to the mat as soon as round two began, but Tavares was able to scramble to his feet and land a nice knee-punch combination. Yet as Romero continued to utilize his wrestling for the first time in his UFC stint, Tavares has more problems to deal with in the form of a nasty cut on his forehead. With less than a minute left, Tavares landed with a jumping knee, but Romero didn’t even blink as he subsequently locked up with his opponent against the fence until the bell.

Tavares went on the offensive to start the third, but a failed takedown attempt resulted in him eating some knees. The Hawaiian kept the pressure on though, letting Romero know that he was still fighting to win. Romero had the same idea, taking Tavares down with less than two minutes left on the clock. A subsequent stall in the action brought a restart from referee Jorge Ortiz, but the Cuban had the last word in the bout with another takedown just before the bell.

With the win, Romero ups his record to 8-1; Tavares, who saw a five fight winning streak snapped, falls to 12-3.