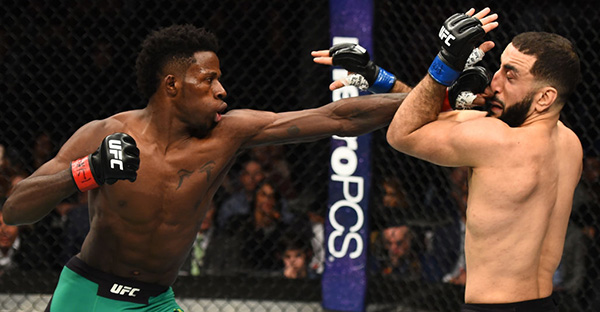 Randy Brown of Jamaica punches Belal Muhammad in their welterweight bout during the UFC 208 event inside Barclays Center on February 11, 2017 in Brooklyn, New York. (Photo by Jeff Bottari/Zuffa LLC)" align="center" />Randy Brown understands the feeling of invincibility that Mickey Gall seems to be feeling as their meeting at UFC 217 draws closer. He’s just hoping that the cocksure world-beater the unbeaten 25-year-old New Jersey native is projecting on social media is the same guy that shows up Saturday night at Madison Square Garden, for both his sake and Gall’s as well.

“He’s 4-0, not to mention 3-0 on the biggest stage in the world, so he’s feeling himself,” laughed Brown, whose showdown with Gall serves as one of four televised preliminary card fights this weekend. “But there is a lot he needs to learn and I’m coming in to humble that kid.

“Mickey has great jiu-jitsu. He’s a good kid, a smart kid who made some great decisions in his call-outs. It’s just that he’s 4-0 and the things that he says – for me, I hope that he believes it because the things that he’s saying it’s just outlandish and I’m like, ‘My man – you haven’t done anything.’

You can’t really blame Brown for feeling a little irritated by the hype surrounding Gall and the fast track to potential stardom he’s ventured down during his first two years on the UFC roster.

Plucked from the same episode of Dana White’s Lookin’ for a Fight series as Brown was in November 2015, Gall celebrated a victory in his professional debut by calling out former WWE superstar CM Punk, while a couple nights later, Brown successfully defended his Ring of Combat welterweight title with first-round knockout victory over Robert Plotkin.

While the opportunistic Gall debuted in the Octagon in a “Winner faces CM Punk” matchup with Mike “The Truth” Jackson, a combat sports photojournalist from Houston who was making his mixed martial arts debut, Brown stepped in opposite Matt Dwyer, a dangerous Canadian with three prior UFC appearances, two post-fight bonuses and 11 professional fights under his belt.

Both earned victories in their maiden voyages into the Octagon and, since then, Gall has gone on to submit Punk and the first fighter to emerge from the UFC President’s show, Sage Northcutt. Conversely, the 27-year-old New Yorker Brown has fought four more times, with victories over Erick Montano and Brian Camozzi getting bookended by losses to Michael Graves and Belal Muhammad.

“Another thing that annoys me is that people are saying, ‘This is a fight UFC dug in the bottom of the barrel to get a guy to slowly build Mickey up’ and I’m like, ‘I made this happen!’ I asked for him because I was sick and tired of him getting all this s*** that I wasn’t getting – s*** that I was working for, they just gave to him.” 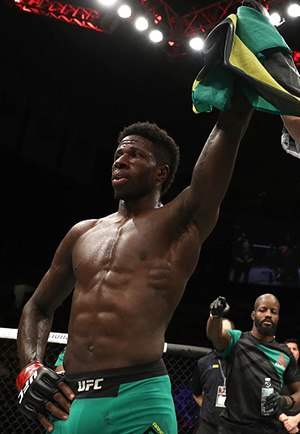 UFC Fight Night event at the Times Union Center on December 9, 2016 in Albany, New York. (Photo by Patrick Smith/Zuffa LLC)" align="left" />The way the 9-2 Queens, New York product sees it, every fighter has to encounter those hard times – the gritty fights, the tough losses, the nights you just don’t have it – in order to learn and grow and Gall hasn’t experienced that yet.

Brown went through it earlier this year when he faced Muhammad at Barclays Center in Brooklyn, coming out on the wrong side of a unanimous decision that prompted him to hit pause on the torrid schedule he was keeping in favor of spending more time in the gym, learning from the mistakes he made at UFC 209 and taking the necessary time needed to grow and develop as a fighter.

“I made a lot of mistakes – stupid s*** that young fighters make and we’ve got to learn from – but I’ve had some time and I feel like it’s done wonders for me. I’ve been able to completely focus on specific things that were some of my deficits and we sealed up those gaps and we’re making huge strides towards becoming a complete mixed martial artist.

“A lot of that fight, I just didn’t pull the trigger; I went in with a horrible game plan, my mind wasn’t right and I paid for it. We’ve made the adjustments now and my opponent that I’m fighting now, that’s something that he doesn’t know and that he hasn’t faced yet.”

And not only is Brown more than happy to be the one to teach Gall those lessons this weekend, he has a warning for his confident, unbeaten opponent as well.

“Mickey Gall has a bright future and I’m gonna be a huge part in his story,” he said. “This is going to be the part where I’m gonna change his life. I’ve had that moment where fights have changed my life and made me make adjustments and reassess the whole thing and I’m that guy for Mickey Gall right now.