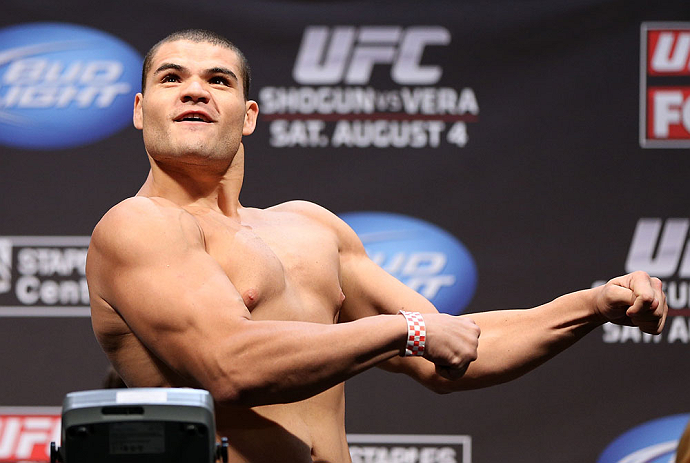 Next Saturday's Belfort vs. Bisping fight card continues to be reshuffled as injuries have forced two more replacements on the Sao Paulo card.

Alcantara's younger brother, UFC veteran Yuri Alcantara, is also getting a new opponent at the event, as George Roop has also been forced out due to injury. The bantamweight Alcantara will instead meet the 14-1 Pedro Nobre. Nobre was eliminated in the first episode of TUF Brasil last year, but went on to rack up four wins outside the Octagon in 2012.

Lightweight Justin Salas has been injured and forced out of his January 19 bout in Brazil. Stepping in is 11-0 striking phenom Lucas "Mineiro" Martins, who has verbally agreed to meet fellow Brazilian Edson Barboza. Both men have wowed fans with spectacular highlight-reel KO kicks.

updated December 27
Middleweight Caio Magalhaes -- himself an injury replacement for Thiago "Bodão" Perpétuo -- has been forced to withdraw from the January 19 card due to injury. His scheduled opponent, Michael Kuiper, will instead fight at the January 26 event in Chicago.

Magalhaes in for Bodao in Brazil

TUF Brasil's Thiago "Bodão" Perpétuo has been forced out of his January bout due to injury. Stepping in to his spot on the Belfort vs. Bisping card will be Fortalezan middleweight Caio Magalhaes, who will now take on Michael Kuiper.

updated November 5
One of the biggest legends of MMA, Vitor Belfort will return to the
Octagon on January 19th, facing off against TUF 3 light heavyweight
winner Michael Bisping in the main bout of the first Brazilian event of
2013. In a venue yet to be defined, fans will also witness the debuts of
three of the first The Ultimate Fighter Brasil
stars as official UFC fighters: Daniel Sarafian, now fully recovered
from the injury that forced him out of the show’s big finale, faces C.B
Dollaway; Godofredo Pepey, featherweight finalist, faces fellow
Brazilian Miltinho Vieira; and Thiago Bodão goes up against Michael Kuiper.

Brazilian audiences will also get a chance to see up close Brazilian standouts such as Edson Barboza, Thiago Tavares, Diego Nunes, Gabriel "Napão" Gonzaga, Wagner "Caldeirão" Prado, Ronny Markes,
Francisco Masaranduba and Iuri Marajó. All bouts have been verbally
agreed to and will be aired live in Brazil exclusively by Canal Combate and in the US on FX Networks..

The 19th January event will be the fifth one held in
Brazil. The country has hosted three events in Rio de Janeiro and one in
Belo Horizonte since August of 2011. Apart from the events, 2013 will
also bring the second edition of the reality show The Ultimate Fighter
Brasil to Brazilian fans.

Official card (all bouts live and subject to change)