Brogan Walker Has More To Showcase

Flyweight Brogan Walker Feels Better Than Ever And Is Ready To Show Her True Potential In The Ultimate Fighter Finale Against Juliana Miller At UFC Fight Night: Santos vs Hill
By Maddyn Johnstone-Thomas, on Twitter @MaddynThomas • Aug. 4, 2022

Brogan Walker plans on taking a page out of her coach’s book for her fight during The Ultimate Fighter finale at UFC Fight Night: Santos vs Hill.

When asked how she envisions her bout with flyweight Juliana Miller going, she referred to the Amanda Nunes vs Julianna Peña rematch at UFC 277, where Nunes reclaimed double-champ status. She’ll be the one with her hand raised, just like her coach’s hand was raised last weekend.

The relationship that she has formed with her coaches during her time on the show and following the conclusion of the show has meant the world to Walker.

“I’m really lucky and blessed to be on Team Nuñes because they have continued to show that they care about me as a martial artist and help me move forward,” Walker said. “They don’t have to message me or check up on me and help me with gameplans, but they do and all of them put that work in for me. I’m so grateful.” 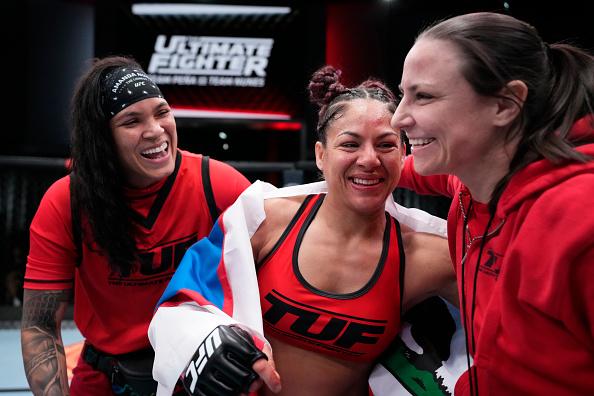 Brogan Walker (c) celebrates with Amanda Nunes and Nina Nunes after her victory over Laura Gallardo in their women's flyweight fight during the filming of The Ultimate Fighter at UFC APEX on March 10, 2022 in Las Vegas, Nevada. (Photo by Chris Unger/Zuffa LLC)

The 33-year-old secured her spot in the final after winning a two-round majority decision over Hannah Guy in the quarterfinals, followed by a three-round unanimous decision over Laura Gallardo in the semifinals. However, it wasn’t an easy path to get to where she is now after dealing with a knee injury on the show.

When she went back home to California, Walker put in the time and energy to get her knee back to 100 percent, in order to put on her best performance this weekend. She feels that she wasn’t able to truly show herself as a fighter due to the injury.

“There’s so much more about me as a martial artist that hasn’t been seen yet,” Walker said. “I haven’t been able to show off any grappling, not too much wrestling and clinch; I’ve done well, but it’s such a small portion of what I got going on and what I can showcase, so I’m excited to be at full health and show that.” 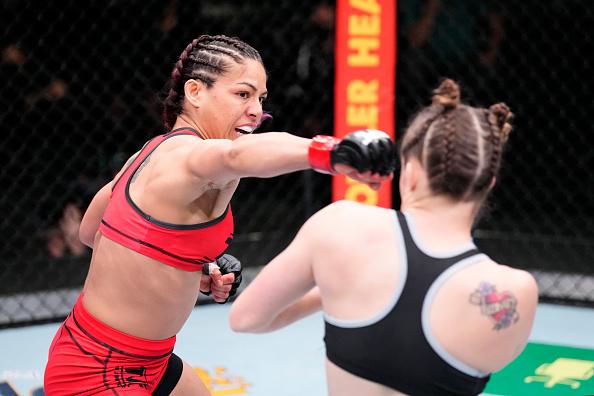 Brogan Walker battles Hannah Guy in their women's flyweight fight during the filming of The Ultimate Fighter at UFC APEX on February 24, 2022 in Las Vegas, Nevada. (Photo by Chris Unger/Zuffa LLC)

When she talks about her opponent on Saturday night, there’s definitely some tension that has built up between the two. According to Walker, there is a big difference between her and Miller. She believes it isn’t about who wants it, it’s about who worked for it.

“I listen to her interviews, and I heard what she said, and she was just happy to be there,” Walker said. “I was not. I knew that I was supposed to be there. I belonged there and I was going to dominate and destroy and I’m not done yet.”

See Everything That Happened On Season 30 Of TUF!

The California native went pro in 2014 and has earned an 8-2 record. She spent time in the Invicta FC promotion, where she tallied a 3-2 record. In the past, she has also faced UFC veterans Miranda Maverick, Pearl Gonzalez, and Erin Blanchfield. Walker believes that the trials and tribulations that she faced on the show have prepped her for this big moment.

She also understands the spot that Miller is in, as someone at the beginning of her career with a 3-1 record who is hungrier than ever.

“I think that I’ve been in the position that she’s in right now where she’s underestimating me and thinks that because she wants it more that it’s going to happen,” Walker said. “It’s not what you want, it’s what you work for. I’ve underestimated opponents in the past, but I’ve learned and grown from those experiences, and I’ll never do that again. I’ll never underestimate anyone.” 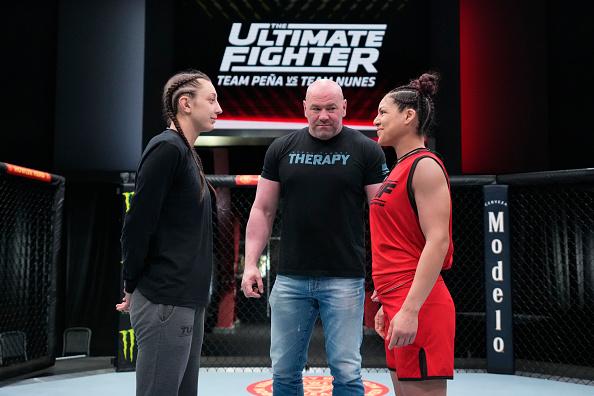 Juliana Miller and Brogan Walker face off during the filming of The Ultimate Fighter at UFC APEX on March 10, 2022 in Las Vegas, Nevada. (Photo by Chris Unger/Zuffa LLC)

Walker’s support team goes beyond those that she interacts with in the gym on a daily basis. She prides herself on the little eyes that look up to her with her experience as a teacher. She wants to go out there and put her best foot forward every time she steps into the Octagon.

It is what fuels her fire to become the winner of season 30.

“I’m always thinking about all of the investments that have been put into me: time, money, heart, knowledge, so much goes into it,” Walker said. “There are so many people to thank, that if I started thanking people after my win, I would be here until next Tuesday. There’s such a big support team behind me and I think about them and hold them in my heart every time I go in there.”