At this point, it may be safe to say that we’ll never see an athlete like Brock Lesnar in our lifetime.

It doesn’t take much to look at Lesnar and see what he’s capable of. That was exactly the case when legendary pro wrestling broadcaster Jim Ross and WWE recruiter Jerry Brisco, saw him for the first time. What they saw was not only a tremendous athlete, but a potential star.

“I saw Brock in his junior year of college in the NCAA tournament, and Jerry and I both agreed that it had been years since we had seen anyone that big, that quick, that agile, that had that sports entertainment look that you couldn’t really take your eyes off of,” said Ross. 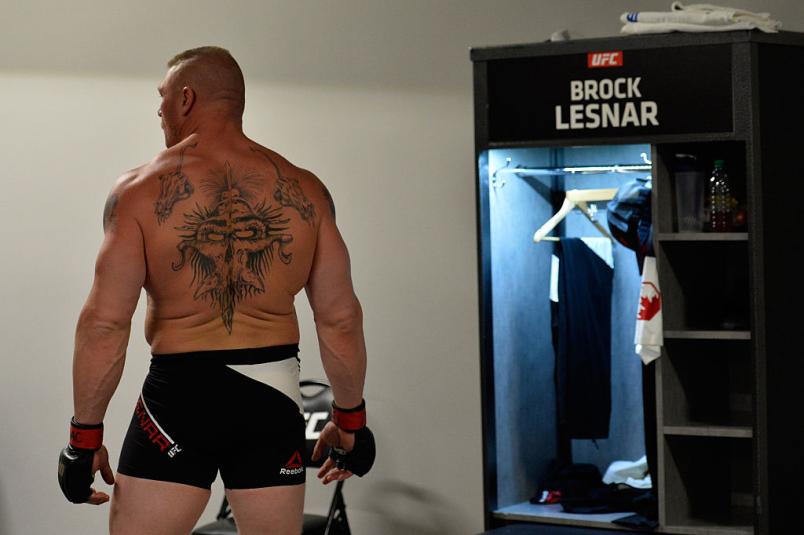 Ross’s words couldn’t ring truer. Lesnar was an undeniable star and a once in a generation physical specimen. Once Lesnar’s pro wrestling career was over, the collegiate wrestler tried his hand at professional football by playing for the Minnesota Vikings. After one season, Lesnar was released by the Vikings. When his time in football concluded, Lesnar decided to challenge himself by entering the world of combat sports.

After winning his MMA debut, Lesnar had caught the eye of UFC President Dana White. White had seen the same potential that Ross, Brisco, and Vince McMahon saw. With his amateur wrestling background and insane athletic ability, Lesnar had the skillset to compete in the Octagon. At UFC 77, Lesnar announced that he had officially signed with the fight company. He may have only had eight fights in the Octagon during his UFC career, but Lesnar’s fighting career saw many great moments. Let’s take a look at some of those unforgettable moments. 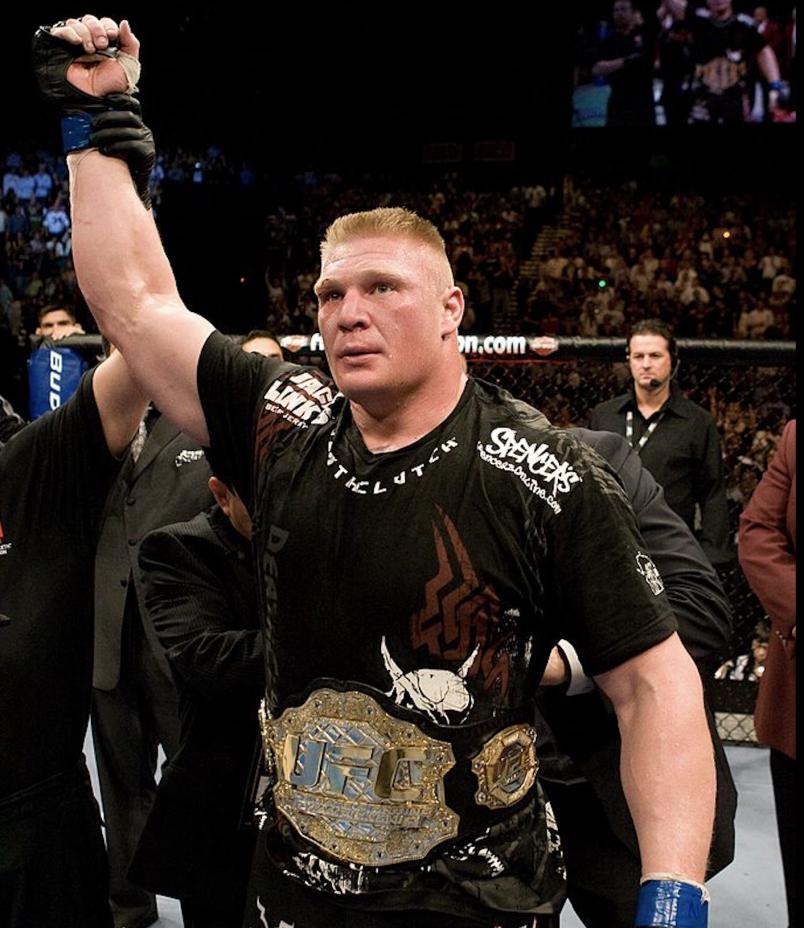 By his fourth professional fight, Brock Lesnar found himself challenging hall of famer Randy Couture for the UFC heavyweight championship. In the first round, he was able to deny Couture’s takedown attempts, keeping the fight on the feet. Lesnar was able to land heavy shots that eventually knocked the champion down and he made the most of his opportunity, unleashing a barrage of ground-and-pound strikes on Couture until the referee called an end to the contest. In his third UFC fight, Brock Lesnar added himself to an elite class by becoming the heavyweight champion of the world. 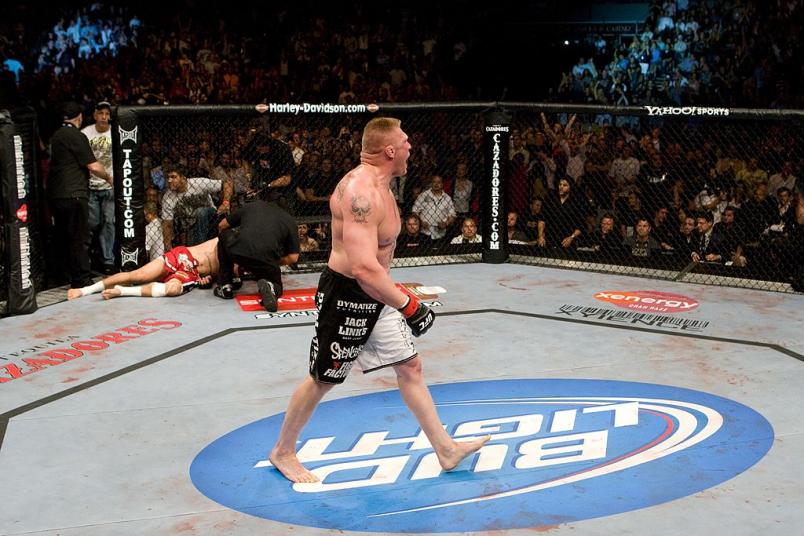 After losing to Mir in his UFC debut, Lesnar went on to win his next two fights, becoming the new UFC heavyweight champion. For his first title defense, it was only right that Lesnar would defend it against the only man to beat him. This time around, Lesnar wasn’t the same fighter he was the last time he met Mir. He was far more confident, patient, and had found validation that he was a force to be reckoned with.

Check Out Lesnar vs Mir 2 on UFC Fight Pass

Brock found far more success in his second outing against Mir almost immediately. Lesnar was able to maintain half guard and hold Mir down for the entire round. After being submitted by the black belt in their first outing, Lesnar knew he had little room for error. This time, the champion was noticeably more patient with his grappling against Mir. While holding jiu-jitsu black belt down, Lesnar was able to land heavy elbows and punches to the face of Mir.

The second round saw the same story. After Mir landed a quick flurry of knees and strikes, Lesnar took him down again. After securing the takedown, Lesnar pressed Mir against the cage and delivered a barrage of punches until the fight was halted. Lesnar retained his UFC heavyweight championship but, more importantly, he got his revenge. 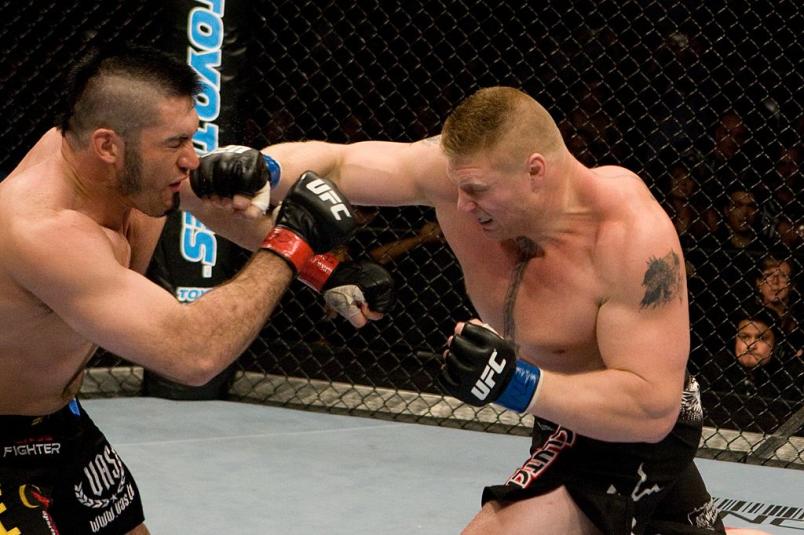 Despite losing his debut to Frank Mir, Brock Lesnar showed a lot of promise, and UFC President Dana White wanted to see more. It was later rumored that Lesnar would be returning to the Octagon to take on UFC Hall of Famer Mark Coleman at UFC 87. However, Coleman was forced to withdraw from the bout due to injury. After a decision win against Cheick Kongo, heavyweight veteran Heath Herring stepped in to replace Coleman.

In the opening moments of the first round, Lesnar landed a hard straight right hand that would send Herring rolling across the Octagon. Lesnar charged the Texas native looking to end the fight right there. Herring was able to recover but was controlled by Lesnar on the ground for the remainder of the round. For the rest of the fight, Lesnar was able to control Herring with his wrestling and grappling. Lesnar won the bout by unanimous decision. 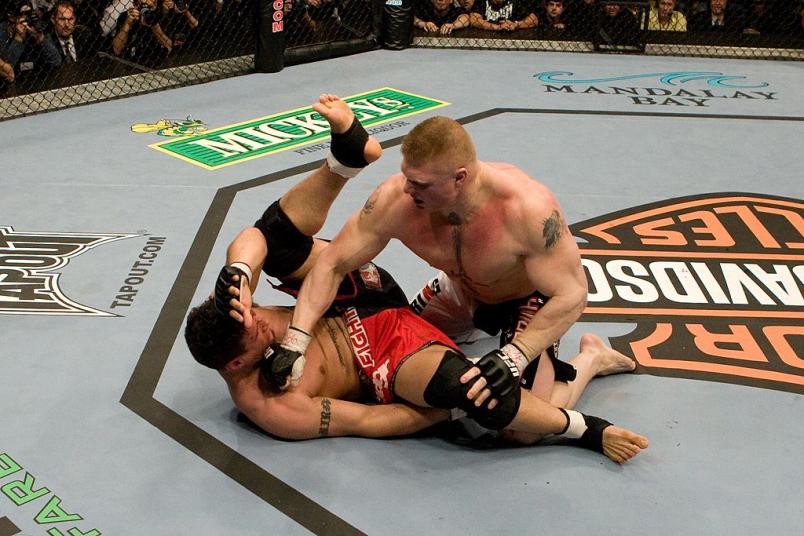 After leaving the world of pro wrestling to try and compete in mixed marital arts, Brock Lesnar was given an extremely tough first fight in Frank Mir for his UFC debut.

Right as the fight started, Lesnar landed a double leg takedown on the jiu-jitsu black belt. As soon as Lesnar had Mir on his back, the former pro wrestler threw a few ground-and-pound strikes before referee Steve Mazzagatti called time after Lesnar landed two shots to the back of Mir’s head. Without issuing a warning, Mazzagatti penalized Lesnar by taking a point. Mazzagatti had both men restart the action on the feet.

Almost immediately after the bout resumed, Lesnar countered Mir’s leg kick with a stiff right hand. Mir dropped to the canvas, and an overzealous Lesnar swarmed the challenger to deliver more damage on the ground. Ignoring the threat of Mir’s dangerous grappling game, Lesnar was submitted by Mir via heel hook.

Despite losing, Lesnar knew he was close to winning the fight. Stepping in the Octagon and facing a former champion like Mir is no easy ask. That night, Lesnar proved he really would fight anyone. In a lot of ways, the loss to Mir may have been the best thing for Lesnar’s early career. It furthered his drive to prove that he had what it took to become UFC heavyweight champion. 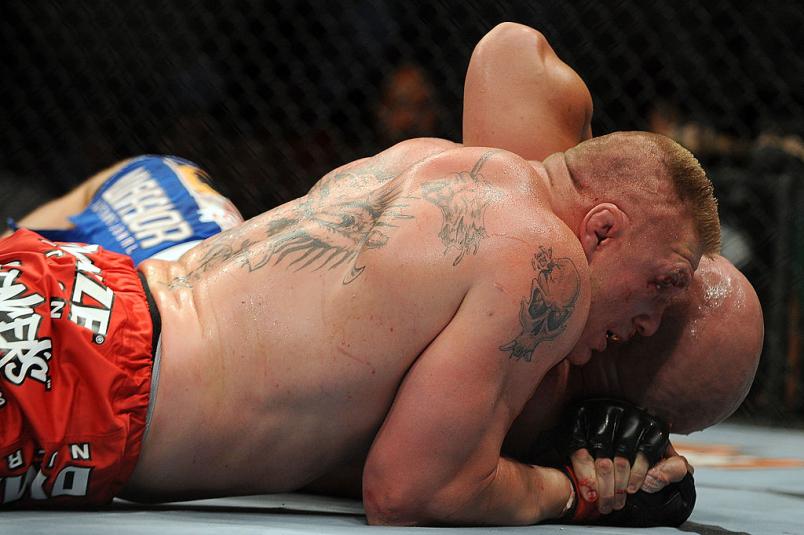 Brock Lesnar holds down Shane Carwin in the second round during the UFC Heavyweight Championship Unification bout at the MGM Grand Garden Arena on July 3, 2010 in Las Vegas, Nevada. (Photo by Jon Kopaloff/Zuffa LLC/Zuffa LLC via Getty Images)

For his second title defense as the UFC heavyweight champion, Lesnar was returning to the Octagon after a year off to face the interim champion, Shane Carwin. Carwin would undoubtedly be Lesnar’s toughest challenge thus far, as he was undefeated, with all 12 of his wins ending by either knockout or submission.

In the first round, Carwin found great success with his striking. After landing an uppercut, Carwin had Lesnar backing up and eventually down on the canvas. Lesnar covered up as Carwin rained down hard punches and elbows. The toughness of the Minnesota fighter was on full display that night, as he was able to survive Carwin’s onslaught. Recognizing that Carwin may have exhausted himself trying to end the fight, Lesnar took Carwin down immediately in the second round. Taking his time in half guard position, Lesnar was able to set up and secure an arm-triangle choke. As Lesnar increased the pressure, Carwin was forced to tap out. Humble in his victory, Lesnar showed a great deal of heart and proved that he was a fighting champion.