"There’s nobody out there like me. I was born to do this, and I’ll fight whoever they put in front of me." - Brock Lesnar 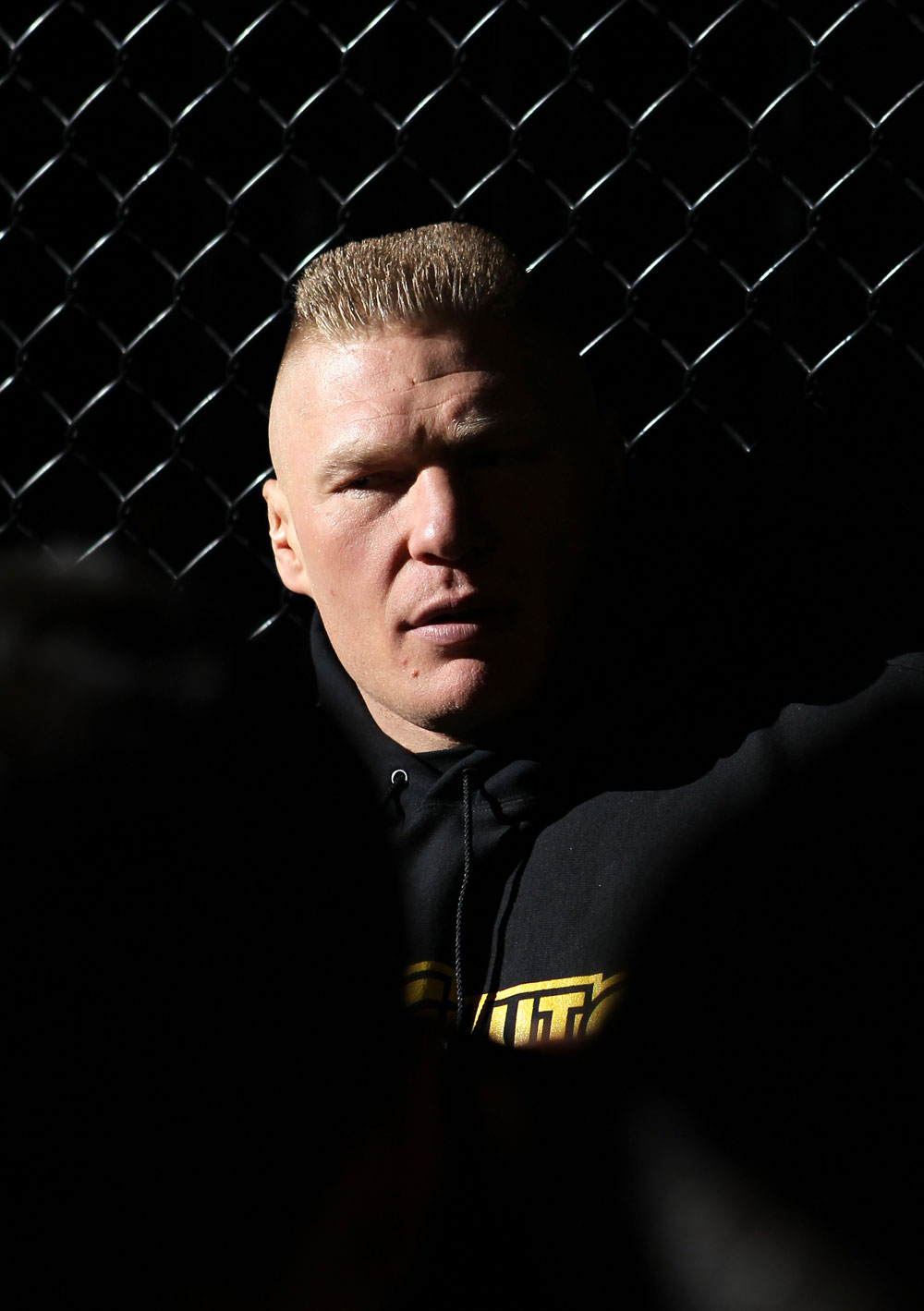 There are always question marks surrounding a fighter after a prolonged layoff, especially one that involves surgery to treat a serious ailment like diverticulitis, so the first inkling of whether that fighter is back to his former self comes in the lead-up to his return. You want to hear if he’s got his mojo back or whether there’s the slightest hint of doubt in his voice.

When that fighter is former UFC heavyweight champion Brock Lesnar, the answer came as soon as he was asked where his willingness to consistently test himself against the top big men in the game came from.

“I was born this way,” said Lesnar. “I was born a bad mother**ker and that’s who I am. It ain’t an act, and it’s not a line. There’s nobody out there like me. I was born to do this, and I’ll fight whoever they put in front of me. I’ve proven myself over and over again that this is my way of life. Where does it come from? I don’t know, it’s just who I am.”

Those three words are welcome ones to MMA fans who have come to embrace the giant from Alexandria, Minnesota as not just “that former pro wrestler,” but as a true mixed martial artist whose resume of fights against names like Randy Couture, Cain Velasquez, Frank Mir, Shane Carwin, and Heath Herring speaks for itself. Win or lose, Lesnar took that walk to the Octagon, backing up any boasts he made when he first signed with the UFC in 2008 and said he wanted to fight nothing but the best.

Unfortunately, his most intimidating opponent has been diverticulitis, the intestinal ailment that has taken him out of commission twice since October of 2009. The first time, he avoided surgery, got well, and pulled off a miraculous comeback win in his return against Shane Carwin at UFC 116 in July of 2010. He would lose his title three months later against Velasquez, but the biggest blow came in 2011, when he was forced to cancel his UFC 131 bout against Junior dos Santos when he revealed that he was stricken a second time by the same illness.

“It’s just pain and not feeling good,” said Lesnar. “It’s like flu symptoms, but it just didn’t allow me to recover. When you’ve got an infection in your body and it’s not healing, words can’t even describe how you feel. You feel like s**t all the time. I had it pretty bad.”

This time, he decided on the surgery, which required the removal of 12 inches of his colon. It was the right call.

“I always had in the back of my mind that I would be back,” he said. “But I just kept dealing with this issue, this diverticulitis, and I kept denying it for the longest time, thinking that I could fight it like I fought everything else and do without the surgery, but the surgery’s the best thing I ever did. I got my life back, I feel like a human being again, and I’m not dealing with the pain and discomfort and not dealing with just feeling downright s**tty every day.”

Once his surgery was done, he got back to business. Really. Not after a year, but almost immediately.

“I was only in the hospital for a day and a half,” said Lesnar. “The biggest thing that they were worried about was the seven inch incision that they made to remove the part. They went through my abdomen, made sure that was healed up, and I was good to go.”

The prognosis? He was good as new and cleared to fight again with only a 10 percent chance of the diverticulitis coming back.

“I’m a 34-year old man and it took 33 years for this to happen,” he said. “I changed my diet and hopefully I’ll never see it again. This is a sickness that a lot of people have, but they don’t even know that they have it, and it just wears on them. It wears you down and just drives you right into the dirt. Now I feel like I’ve got a new lease on life.”

And on his fighting career, which resumes Friday night against former Strikeforce champion Alistair Overeem. As is his tradition, there are no tune-ups for Lesnar, only one killer after another. If taking on an athlete the caliber of Overeem in his first fight back after surgery and a 14 month layoff doesn’t convince you that Lesnar’s the real deal, nothing will. But then again, he really doesn’t care.

“I’m not here to impress anybody or to make any friends,” said Lesnar. “I’m just here to fight and make a living and I want my UFC title back, and that’s it. I’ve got one speed, and that’s wide open. Everything I do is wide open. I’ll deal with the consequences after the fact.”

As for Overeem, Lesnar says that he’s “just another guy, and as far as I’m concerned, I’m here to fight and I’m here to get my title back. Whoever they want to put in front of me, I don’t care.”

Suffice to say that Lesnar wasn’t spending too many sleepless nights worrying about the striking of his opponent, a former K-1 Grand Prix champion. Then again, that’s nothing new for Lesnar, a NCAA Division I wrestling champion who left the scouting to his coaches when it came to tournament time.

“I didn’t scout, I didn’t do much of anything about it,” said Lesnar. “You just show up, wrestle, kick ass, take names and go home and eat a bowl of cereal. (Laughs) Everyone’s got their own deal, but that’s kinda how I approach it.”

And while he has made it clear over the years that he’s no internet junkie when it comes to keeping up on the daily workings of the sport that he makes his living in, he is aware that among the heavyweights, things are getting more interesting and more competitive by the minute.

“This is a sport where anything can happen at any time,” said Lesnar. “It’s a tough division and it’s one of the toughest divisions out there now. It’s fully loaded with lots of talent, so for me to sit and analyze who the next champion is gonna be…hopefully soon enough it’s gonna be me, and that’s all I can really focus on.”

He pauses for a moment, then continues.

“I just believe I’m the champ. Even without the belt I still think that I’m the guy. Not to have the title is disappointing, but I’m a professional and I understand that I gotta win fights and then I’ll become champion again.”

Brock Lesnar has wrestled, both in college and in the WWE, he’s tried out for the NFL, and he could probably retire to his farm right now and be settled for the rest of his life. But if he’s figured anything out over the course of his 34 years on this Earth, it’s that his true identity isn’t on the mat, in the ring, or on the gridiron or farm. It’s in the Octagon, and he won’t ever deny it.

“I finally feel like I’m at home,” he said. “Certain people are born to do certain things. Every day, there’s somebody who’s born for a specific job. It’s Greek mythology – you handpick this kid and he’s gonna be this. If it was back in the days, I would have been a gladiator. I’m just a modern day gladiator.”