"I feel like it doesn’t matter what Chris comes in to do now, I can beat him wherever the fight goes." - Dan Hardy 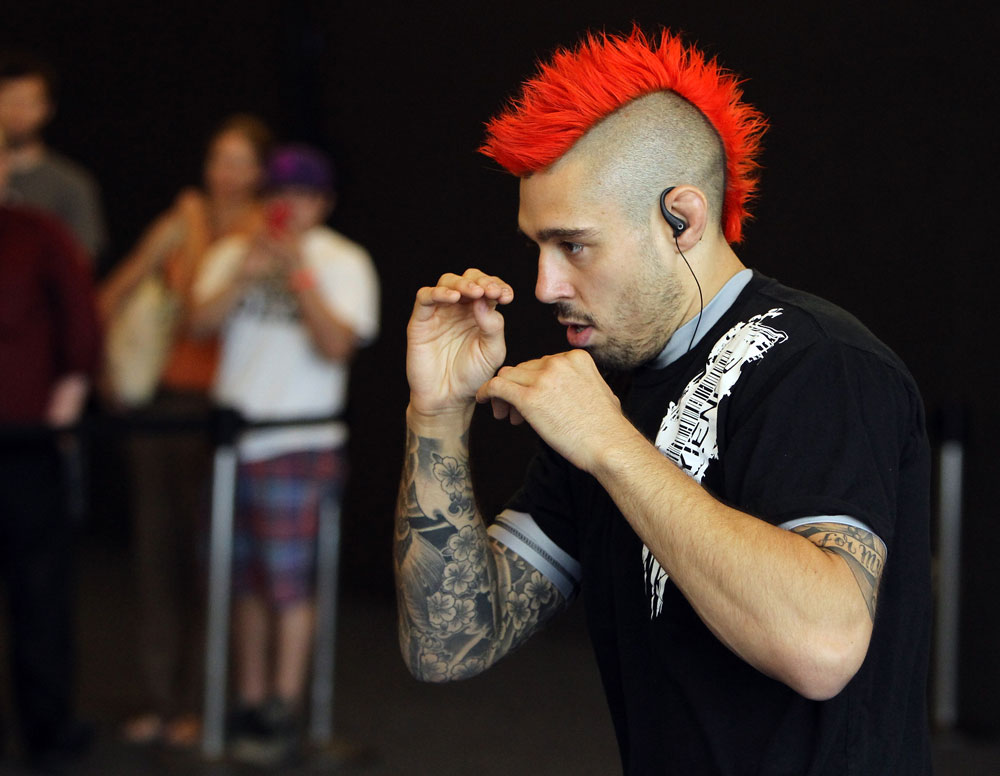 This is Dan Hardy at 29. Still “The Outlaw,” still alive in the UFC welterweight division, yet still wondering how to right his ship after three consecutive losses. These days, fighters can get cut after three losses; some get released after two defeats, and there are even those who are one and done in the Octagon.

But there’s something about this young man from Nottingham, England, a spark, a charisma, an idea that there’s more to him than his 4-3 UFC record. And these were no slouches that handed him a trio of setbacks over the last 17 months – welterweight champion Georges St-Pierre, top contender Carlos Condit, and rising star Anthony Johnson.

A loss is a loss though, and the oft-repeated storyline for his Sunday main event bout against Chris Lytle is that a loss may be disastrous for Hardy’s future in the UFC. He’s not shying away from it, stating that “this is definitely a back against the wall situation.” Yet at the same time, he’s not letting it cripple him mentally in the time leading up to the opening bell.

“I did feel the pressure in the last fight (against Johnson in March), but I’m not feeling it so much now,” he admits. “I’m kinda past that point, and I’ve just got to get in there and do what I do and everything else will take care of itself. I think in the last fight I kinda burned myself out concerning myself with it. Coming off the title fight (with St-Pierre) I went into the Condit fight thinking that this was my first step on the road back to the title. And after that I got caught and I was like ‘hang on a minute, what happened there? That wasn’t supposed to happen. And then I put a little bit of pressure on myself for the Johnson fight and I think it burned me out a little bit.”

Following a 4-0 sprint to begin his UFC career, Hardy was matched up with St-Pierre in March of 2010, and though he lost a lopsided five round decision, he was rightfully praised for his grace and heart under pressure that included some painful submission attempts by the champion. When it was over, Hardy dropped a fight, but little else in terms of public sentiment. Even today, he says “with the GSP fight, there was no pressure because I was counted out from the start.”

There was more on the line in terms of pressure when he returned home to England to face Condit at UFC 120 last October. In that bout, a trade of hooks in which he was a split second slower on the draw allowed Condit to score a memorable first round knockout.

Now 0 for 2, Hardy got the fight he wanted in March against knockout artist Anthony Johnson. Convinced that a slugfest with “Rumble” would put him back on track, Hardy told the world that he was going to come out swinging. Johnson said the same thing. But only Hardy was telling the truth, and in a brilliant display of gamesmanship and disciplined adherence to a gameplan, Johnson – a former national junior college wrestling champion – took Hardy down and kept him there, winning a unanimous decision in the process.

It almost wasn’t a loss for Hardy in the eyes of the public considering that he never really got a chance to fight, and even in a chat with “The Outlaw” in Vegas a couple months back, he still shook his head when talking about the loss – to Condit, not Johnson. Those feelings haven’t changed much.

“I was more annoyed about the Condit fight because it was my own fault,” he said. “That was my arrogance that got the better of me. I caught him with a good shot and I thought, this is it, and I started chasing after him. And it was ego and confidence that got the better of me in that one. I’ve never let that happen before and I never thought I would ever let that happen to myself, and it did, and that’s why it’s still with me. It was my fault that I lost the fight and he feels like he’s a better man and I know he’s not.”

As for his most recent defeat, Hardy says, “The Johnson fight taught me one thing – it was that opponents can be unreliable.”

He laughs, and then elaborates.

“Sometimes when you’re in a fight you make a mistake and it costs you the fight, and sometimes, you just don’t win. “And that was really the case in the Johnson fight. I went in there, felt like I was ready, and when I got in there it just didn’t go my way. I can’t take anything away from him. Obviously I was expecting a different type of fight from him, but it went down the way it did and I really don’t have excuses for it. I know there are things in my game I need to work on, and I think he highlighted that. He played a smart gameplan and he got his win bonus and he’s in a little bit more comfortable position in his career. The fans weren’t too happy about it, but that’s on his conscience and not mine, I guess.”

What did stick in the mind of Hardy was the fact that his inability to stop Johnson’s takedowns or get back to his feet when taken to the mat cost him that fight. So in addition to his usual work in Nottingham early on in camp, he also set up a base in Las Vegas to work with heavyweight contender Roy Nelson and his team, the Country Club.

To many people, that would seem like a major upheaval, but to Hardy, traveling and seeing different things aren’t just perks of the job, they’re passions he’s had for as long as he’s been able to get around on his own. In the process, he’s done a lot of living in just 29 years, more than most, and it’s made him who he is.

“I’m very appreciative and I’ve got a family behind me that have always encouraged me to just go out and experience things,” said Hardy. “For me, it’s traveling, getting out there and meeting people that you wouldn’t normally meet and putting yourself in circumstances where you have to adapt a little bit. I’ve got a little bit more of a mature head because of that I think. I’ve traveled a lot on my own and I’ve been in situations where I’ve got no money and I’m staying in hostels and stuff just to get some training sessions with some guys I look up to, and I look back now and I think that the reason I’m where I’m at now is because I’ve put that time in and taken those risks and kinda lived a little bit rough and on the edge. I don’t want to get to the end of my life and look back and go ‘I should have done that and should have done that.’ I want to feel like if at any time it’s taken away from me, I’ve made the most of it.”

“I’ve been wondering that myself,” he laughs. “The Dan Hardy at 50, I’d like to be a lot more educated than I am now, I’d like to be very well read, and a bit more of an English gentleman, maybe. I’ll still be rocking the Mohawk but maybe with a tux at the same time.”

Sounds like a plan. But then again, the best part of Hardy’s life has been not having a plan, just winging it and seeing where life takes him. He’s got his ‘to do’ list. Whether he finishes it is just part of the fun.

“I was having this discussion with my coach the other day, and I don’t think I have enough years in my life to do all the things I want to do,” he said. “But that’s exciting for me because I feel a certain haste to kinda fit it all in and get things done.”

The first thing on that list is to get back in the win column this Sunday against Lytle and revive his quest for another shot at the welterweight title. And whether Lytle stands and trades with him or takes him to the canvas, Hardy insists that you will see a fighter ready for whatever happens when the bell rings.

“I’m not allowing myself to come in unprepared this time,” he said. “One of the reasons why I came out to Vegas was so I can be fully prepared for the fight in every range, and I feel like I am. I feel like it doesn’t matter what Chris comes in to do now, I can beat him wherever the fight goes. And that gives me the confidence to know that it really doesn’t matter what happens in the fight now. I can win it wherever we end up. I’m pretty sure Chris is gonna come in and make an exciting fight for the fans and try to beat me on the feet and get that win. But either way I’m ready for him. It doesn’t really matter what he does this time.”

As for all the other stuff…

“I’m quite relaxed about it,” said Hardy. “Obviously my career’s important to me and my job with the UFC is important to me, but it’s just a case of I’ve just got to do what I can, and as long as I give it everything I’ve got, I can’t do any better for myself than that. I’m confident that I’m in a good place now, I’m relaxed, and I’m ready for this fight. This is the start of the upward swing.”