For Brilz, Nothing Less Than A War Will Do

“The college wrestling room is tough. We weren't afraid of fights in there. A lot of times, I'll leave a wrestling practice more banged up than after a fight." - Jason Brilz 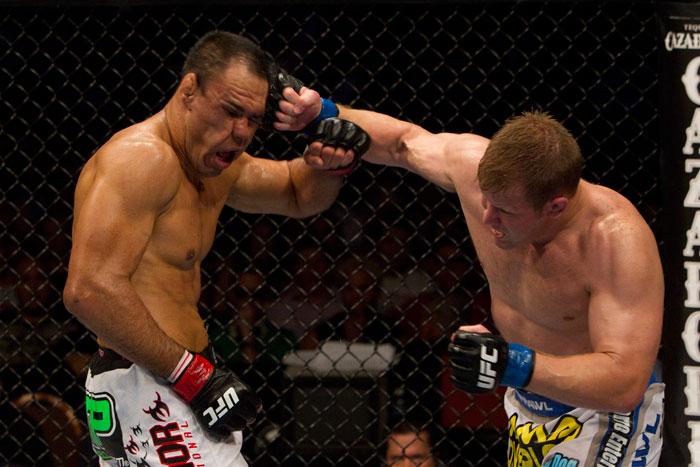 Nothing is more satisfying than a hard fought decision. The flashy first round knockout or submission is great for video editors needing highlight reel material. But nothing is better than two fighters going toe-to-toe for as much time as the athletic commission will give them. After months spent in the gym training by both fighters, after weeks of hype getting the fans to get tickets or buy the pay-per-view, after hours of whipping everyone into a frenzy to watch these two battle only minutes away and then the fight only lasts seconds? This sport is not built on the short and sweet; the UFC is a turf war in a cage.

No one knows this and likes it that way more than UFC 114 “Fight of the Night” winner Jason Brilz.

“I've put in countless hours training for this fight and I don't want this fight to be over in two or three minutes,” Brilz says with not only a refreshing dose of honesty, but an uncompromising love for the actual business of fighting. “I want to grind it out. I want to show that all my training paid off. I want to show everything that I've learned. That's what's so intriguing about this fight.”

“The Hitman” is referring to his upcoming fight against Vladimir Matyushenko at UFC 129 on April 30th. If there was an award for potential “most grueling” fight, then the UFC brass pitting two bulls with excellent wrestling experience against each other would most certainly take the prize. With a combined 25 plus years of MMA experience, these two light heavyweights have only been stopped four times and three of them are on the Belarus native’s record not Brilz’.

To most, the 35 year old Brilz must sound crazy that he is genuinely excited at the proposition of being assaulted by “The Janitor”. But most people have not dedicated their lives to the infamous grind of wrestling the way Brilz has and those who have understand. Brilz is a three time Academic All-American wrestler at the University of Nebraska-Omaha, where he is an assistant coach to this day.

“I love fighting good strikers and I love fighting good Jiu-Jitsu guys, but I always wanted to fight a really great wrestler and he’s a great wrestler,” explains Brilz who was originally scheduled to fight Matyushenko last November before Brilz pulled out of the fight due to a back injury. After a myriad of opponents were switched due to injuries, “The Hitman” and “The Janitor” are back where they started, ready to brawl with each other. “I want to fight someone who is looking to impose their will on me. He's like a more experienced version of myself in that way. I'm really excited for this fight.”

It will be 11 months since Brilz last stepped into the Octagon after a controversial split decision loss to Antonio Rogerio Nogueira at UFC 114. It was three rounds of continued contention as Brilz fought tooth and nail with the acclaimed Nogueira brother. Although a loss is a loss, Brilz walked away from that night with three things: the confidence he could fight an opponent of Nogueira’s level in all areas, a “Fight of the Night” bonus check and the deafening boos from the crowd after the decision was read clearly showing that the people there thought “The Hitman” won.

“When I walked in, I actually heard my brother-in-law screaming and he was up there aways in the arena, but I could hear him screaming. I remember thinking I have about 10 people here thinking I have a chance, then to hear the crowd at the end of the fight was something else. Not just the booing and stuff after the decision was announced, but how the whole atmosphere changed during the middle of the fight was really an adrenaline rush for me. It's something a lot of people will not get to experience in their lifetime and I've been pretty fortunate in my life to be able to. It was one of those moments where I could sit back and realize how much I enjoy this and how much I don't want it to end. I got right back in the gym and started working on things.”

The 55,000 UFC fans at the Rogers Centre in Toronto will be more than eager to cheer for Brilz, knowing he wants this fight to be a battle as much they do. “I think what everyone is looking for is a good old standup war, with our wrestling cancelling each other's out.” Brilz has been working heavily on his striking game in anticipation for this outcome with former world champion kickboxer Kurt Podany. “I've been working a lot on my standup. I'm making it a lot quicker, a lot crisper and adding a lot more movement.”

Besides his standup, “The Hitman” is also training his ground game at Premier Combat Center in Omaha with fellow UFC fighters Ryan Jensen and Jake Ellenberger. “I've been going for more submissions and not worrying about getting in bad positions as much,” asserts Brilz whose 18-3-1 record is half filled with submission victories. “I'm working on staying aggressive the whole fight, either working for a dominant position or going for a submission. I would love to go out every fight and get a late 2nd or early 3rd round submission or a knockout. But sometimes it is not in the cards, it's not like I'm not trying.”

As for his greatest fighting attribute, Brilz trains his wrestling with the current heavyweights of his alma mater, University of Nebraska-Omaha, who are back-to-back Division II National Champions. In the college wrestling room, Brilz discloses he is a part of an untelevised brutality that makes him as tough of a fighter as he is. It is not at all surprising considering the dominance that high level wrestlers have in the ranks and history of the UFC.

“The college wrestling room is tough. We weren't afraid of fights in there. A lot of times, I'll leave a wrestling practice more banged up than after a fight just because these guys get it in their head they’re not losing, they’re not giving up on this take-up. They will beat on your head, they'll smash your face into the mat, they're kicking your feet out. I'm a heavyweight coach, so we get in there and we start snapping the head down, beating on the head, beating on the arms, you're throwing forearms, it really is a brutal sport, but that's what's so cool about it. You're just getting in there and beating on each other and then you get into a fight and you get hit a couple times and you're like this isn't much more than a wrestling practice really.”

This is the life of a wrestler. This is what Brilz is putting himself through in preparation, and so is his opponent Matyushenko, for April 30th. “The Janitor” is a world renowned wrestler who has wrestled against Olympians as well as collegiate wrestling’s best. It’s a certain type of toughness, a grittier toughness that wrestling breeds and these two will step into a cage for 15 minutes to show that. Lastly, if UFC fans are still not sold on basically two shaved bears going to war in the Octagon at UFC 129, then Brilz summing up a wrestler’s mentality going into a fight will:

“The best submission is when you physically break someone. You can feel it. You can hear this ‘ugh’, this loss of air from them. You can see it in their eyes that they're saying, 'is the guy going to ever stop coming at me?' That's my favorite type of submission, to physically and mentally break somebody. In wrestling, especially during practice, I would go against heavyweights and there would be times we would have grind matches where we go for 30-35 minutes before someone physically and mentally broke. Wrestlers get that mentality to want to beat somebody to that extent. Sometimes when you beat a guy up in MMA the ref pulls you off of them and you jump up and the other guy jumps up too right away. But if you break someone mentally and physically then they're still on the ground thinking about it, thinking about that you dominated them. That's a pretty cool feeling.”

Did that give everyone else chills? It sounds like a pretty cool feeling. That type of action doesn't happen in 20 seconds; it happens in a "Fight of the Night".