Brianna Van Buren Is Here To Make A Statement

Healthy and motivated, Brianna "The Bull" Van Buren believes that a win over a fighter like Tecia Torres puts her on the map.
By Thomas Gerbasi, on Twitter: @TGerbasi • Jun. 19, 2020

The excitement is clear in Brianna Van Buren’s voice as she makes her return official, and that mission statement should make more than a few strawweights take notice.

But after sitting out since last July due to hand surgery, “The Bull” isn’t calling out the big guns at 115 pounds or speaking of her plans for world domination. She just wants to fight, something she was trying to do as soon as she got out of surgery.

“When I woke up, I remember texting my manager,” she said. “I was on medication and I was like, ‘Okay, they told me the stitches are gonna be out and if I'm super healthy they'll probably be out quicker and I think I'm super healthy.’ (Laughs) I was on my manager from when I left the hospital. But he told me, ‘Slow down, take your time, everything's gonna happen the way you want it to happen. Just get healthy.’” 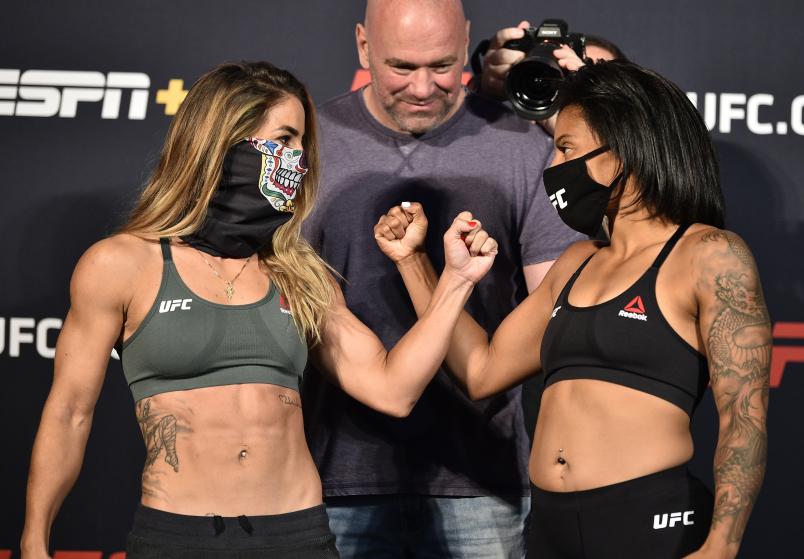 That was tough for the competitor in Van Buren to take, but she listened. In the meantime, she bought a house and planned her wedding. The house purchase went through, but the COVID-19 pandemic put the wedding on hold. All the while, pre and post-pandemic, she watched the strawweight world go round.

“It was frustrating sitting on the sidelines and seeing everybody else have scheduled fights,” she said. “I've been super impatient, so I'm just excited that I finally got a fight and it's happening this weekend.”

Oh yeah, remember that “here, healthy and back” thing? That all takes place in Las Vegas when she meets up with perennial contender Tecia Torres. The matchup between the top prospect and the veteran standout is rock-solid on its own, but even more intriguing is that Van Buren will finally get to face an opponent who won’t have a significant height and reach advantage on her. In fact, Van Buren holds the reach edge over the taller Torres, but the Gilroy native says it will be business as usual no matter what the tale of the tape says.

“Nothing has really changed for me because I've always been the smallest one,” she said. “And technically, I'm under five feet. I'm 4-11. But what people don't know is that I have a really long reach. I'm used to fighting girls who are taller than me, though, and Tecia's not that much taller, so this fight is gonna be exciting because we're both small girls and the game plan still stays the same.”

That game plan has led her to nine wins in 11 pro fights, five finishes and an Invicta FC strawweight title that she won by defeating Manjit Kolekar, Juliana Lima and Kailin Curran in the same night May 2019. Two months later she was in the UFC and making a statement with a debut with over Livinha Souza. Now it’s off to chase gold.

“I'm all about chasing goals and getting after things,” said the 26-year-old southpaw. “Obviously I'm all about making history and doing these things, but I just kind of roll with the punches and keep climbing the ladder, and whatever it's gonna take for me to get to the top, that's what I'm doing.”

That ambition has been matched by talent and hard work, and it may also be in her blood, as she credits her uncle, Strikeforce veteran Anthony Figueroa, for getting her to this point.

“I blame it on my uncle,” Van Buren laughs. “He is a go-getter, he's somebody who I've always looked up to and I think it's the things he's instilled in me that I'm just taking as life. I'm never satisfied and I'm never content. And the way I look at it, there's always room for improvement and there's always somebody out there who is working just as hard, if not harder, than you. So I want to outwork everybody.” 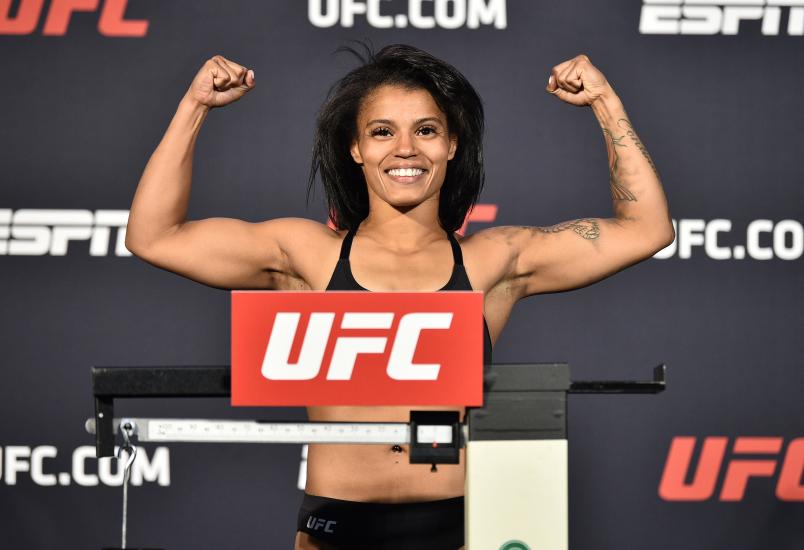 Brianna Van Buren poses on the scale during the UFC weigh-in at UFC APEX on June 19, 2020 in Las Vegas, Nevada. (Photo by Chris Unger/Zuffa LLC)

If she’s always working, she won’t have time to sit back, smell the roses and let her peers catch up to her. And that’s precisely the point.

“The moment I stop and think about things, I feel like then I'll start to slow myself down,” Van Buren said. “I try to go with the flow of things and take it all in when I need to take it all in and keep moving forward because I'm never happy. I'm still climbing the ladder and there's somebody always ahead of me. There's the champion of the UFC and that's what I'm aiming for. I'm never gonna be content until I get there.”

Sounds like someone can’t wait for the Octagon door to shut on Saturday night.

“I miss punching people in the face,” she laughs. “I miss the competitiveness, I miss being in the cage, I miss my hand getting raised and just getting back to it and the grind. It feels good to be back.”