“The key for me is attacking everywhere. I’m no longer a one-dimensional fighter. I can fight everywhere." - Brian Stann 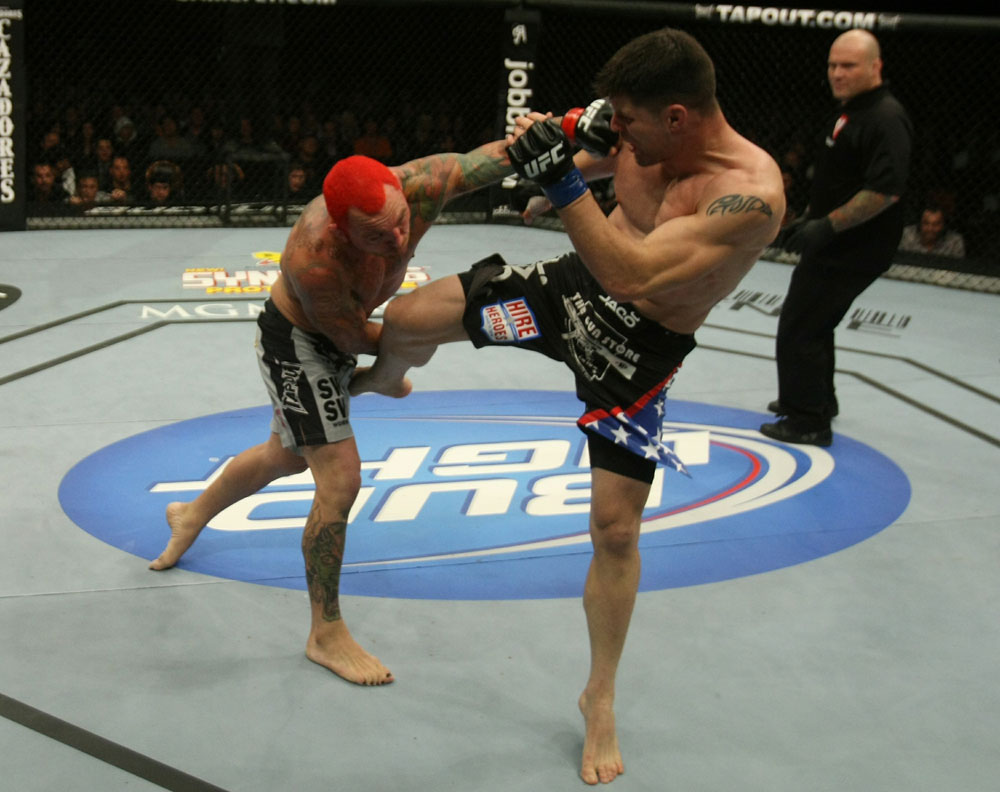 At just 2-0 at middleweight, Brian “All American” Stann (10-3) is still fairly new to the division, but that’s not stopping the man who commanded elite forces in Iraq as a Marine from following a stringent set of goals for his UFC career at 185 pounds.

“My mission coming into 2011 was to break into the top ten,” said Stann. “Going into the (Chris) Leben fight I said I was going to be a top 10 fighter. If I beat Jorge Santiago I’ll be in the top 10. He’s been there for the last two years, he’s as high as number six on some rankings, and this fight has everything for me that I need. Everything I want is sitting right in front of me. 2012 is the year I want to fight for the title.”

But first he has to get through former Sengoku champion and UFC veteran Jorge Santiago (23-8) at the MGM Grand Garden Arena on May 28th. The newly re-signed Santiago is an ace on the ground who is dangerous from anywhere the fight goes, and Stann understands the challenges set in front of him.

“I’m very impressed with Jorge Santiago as a fighter,” he said. “He’s a champion. He’s won multiple belts since he’s left the UFC the first time, and he poses two really big challenges. Obviously he’s a world class grappler, so he’s very good on the mat. But more importantly, he has a way about him that just finds ways to win fights, whether it’s on the ground, in the clinch, by decision, standing – he has really shown he possesses a talent to find ways to win fights, even ones where he was clearly behind, like the last fight with (Kazuo) Misaki.”

Stann had his sights set on Wanderlei Silva, but a training injury forced “The Axe Murderer” to withdraw from the bout, putting Stann’s Memorial Day weekend fight in jeopardy before Santiago stepped in.

“I knew it was a long shot anyway, there were five or six guys that were all qualified who were asking to fight Wanderlei Silva,” said Stann. “I wasn’t trying to jump on the trend, I was saying back in my WEC days that that would be a great fight for me. When I first started watching his fights, I was awestruck with his tenacity and the way he fights. The fact that he backed out of our fight there were a number of reasons he just physically couldn’t be ready for it and I don’t take that as an insult at all, and I got a better fight out of it. Santiago is ranked way higher than Wanderlei is right now, so this is a great fight for me and my career. Ultimately I asked to be on this card because it’s Memorial Day weekend. That’s the most important holiday for me. We didn’t even know who the opponent would be when we asked to fight on May 28, I just wanted to fight on this card. That was the most important aspect for me.”

Like an advancing military unit, Stann is plotting his UFC career step by step, and he’s implementing that plan accordingly.

First it was a switch to Greg Jackson’s camp in Albuquerque, New Mexico and a drop to middleweight from light heavy. A submission win over Mike Massenzio last August proved that Stann could perform after cutting more weight than he had his entire life, and following that impressive debut came a first round knockout over the battle-tested Leben at UFC 125 earlier this year.

Hearing Stann talk about his developments in the fight game, it becomes apparent that the former WEC light heavyweight champion has the ability to separate himself from the fighting commodity he represents inside the Octagon.

“The key for me is attacking everywhere,” he said of his strategy for Santiago. “I’m no longer a one-dimensional fighter. I can fight everywhere and there’s nowhere in this fight that he can take it where he can overwhelm me. I feel like I’m a better wrestler than he is, I think I’m a better striker. The area where he is better is Jiu-Jitsu, but this isn’t a grappling tournament. We’re not starting off slapping hands and starting on our knees. I can knock guys out from every single position and that’s what I’m going to try to do this fight.”

Stann also feels like he has the advantage of being accustomed to the Unified Rules of Mixed Martial Arts, which govern all UFC bouts, and fighting in the Octagon, whereas Santiago followed a different set of rules and fought in a ring for the last few years of his career.

“I think the differences in the rules from Sengoku to UFC will affect Jorge,” he said. “The rules we have don’t let guys take you down and just lay on top of you. You have to advance your position. You have to work for submissions, and try to finish the fight. So the fact that they stand you up a little bit quicker here, I think that’s a factor and I’m sure Jorge has trained for that. The biggest thing is the cage, however. It’s a lot easier to hold someone down on the mat in a ring than it is with a cage. That cage offers a huge variable for guys that want to get back on their feet. It gets very difficult to hold anybody down once they get their back to the cage.”

Outside of the cage, Stann dedicates his life in furthering the causes of returning U.S. military veterans, whether that is advocating for the latest and greatest medical treatment for vets, or helping them land jobs through his Hire Heroes Organization, a non-profit organization that helps employers find the right candidate among former servicemen and women. Stann says his fighting is a boon to that mission as well.

“It’s really my job as the president of the Hire Heroes Organization to go out there and find strategic relationships that are going to help place veterans in jobs after their service is up, he said. “I have an amazing executive director and executive who run the show day-to-day who report to me, but I can’t tell you how many very valuable relationships have developed from watching me fight or who have read interviews because the media have been very kind about mentioning Hire Heroes in many of the pieces about me and I’m grateful for that.”