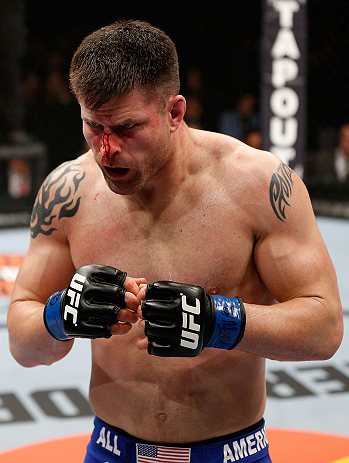 Rare is the fighter that leaves the sport on a win. It’s just the way things go. From Joe Louis and Muhammad Ali to Chuck Liddell and Fedor Emelianenko, combat sports have a way of making you ride off into the sunset in a vastly different way than you entered the game.

But if you’re going to leave after a bout in which your hand wasn’t raised at the end, you would probably want to go out like Brian Stann, who announced his retirement on Ariel Helwani’s MMA Hour Thursday at the age of 32. "I leave taking more from mixed martial arts than I ever gave," he said on the show.

In March, the former WEC champion returned to the light heavyweight division after a stint at 185 pounds to meet Brazilian legend Wanderlei Silva. For the next nine minutes and eight seconds, it was a thrill ride of epic proportions at the Saitama Super Arena in Japan as the two sluggers did what they did best, giving and taking haymakers from all angles. When it was over, “The Axe Murderer” Silva emerged victorious, but Stann’s reputation took no hit at all. In fact, his profile may have been raised even higher in defeat.

Fights like that don’t spell a long career though, Silva being a notable exception. So after compiling a 12-6 pro MMA record, and with a promising broadcasting career with FOX that includes work on the network’s UFC, boxing, and now college football broadcasts in place, the married father of two (with a third child on the way) decided that the time had come to move on to the next chapter in his life.

Looking beyond the surface, it’s not a surprising move from Stann, a young man whose decision making process served him well long before he put on the gloves professionally for the first time in 2006. A veteran of the United States Marine Corps, Stann’s heroism in battle was well documented. During the Iraq War’s Operation Matador he earned a Silver Star for valor in battle after the unit he commanded was ambushed near Karabilah, and Stann made sure all 42 of his men survived the attack.

Even after he retired from active duty, Stann stayed attached to the military, launching the Hire Heroes organization to aid veterans in their transition back to civilian life. And though he was a candidate to suffer the same post-traumatic issues his comrades were dealing with, as he told me before his 2012 fight with Alessio Sakara, two things kept that from happening.

“One was martial arts,” he said. “I had a fight already scheduled and signed in the WEC to fight Steve Cantwell the first time. I signed that contract in Iraq. They emailed me and said ‘hey, we want you to fight,’ and it was basically six weeks to the day I landed. I had sand in my ears when I fought Cantwell the first time, and that was one thing. Martial arts is an amazing release, it’s great therapy, and you’re not gonna come home angry after you’re going to the gym a couple of times because everybody knows the positive things that happen to your body after a great workout.

“The second thing that happened, even more importantly, was immediately upon returning from Iraq, within three weeks I got my wife pregnant. We got the news that we were having a baby, and at that point in time, that was the biggest change in my life. I wasn’t getting out of the Marine Corps. I was gonna stay in the Marine Corps, I may have a couple of fights just for the hell of it, but now all of a sudden I’m gonna be a dad, and there’s no time for feeling sorry for myself. There’s no time for getting angry over these things. I gotta raise a family, and I made a promise to myself when I was all alone, that I would never bring that into my home. Never. My wife doesn’t know much about it whatsoever and she’s never had to be a part of it. But I truly believe that the consistent training and focus and the mountains and adversity I have to overcome through martial arts, there’s a lot of therapy involved there. Martial arts is known for being something that’s character building, that increases focus and keeps your mind, body, and spirit as one, and that’s all true. And I’ve been very adamant with the military in their own martial arts programs being used to combat post-traumatic stress, because I feel like they are a huge tool for doing so.”

Stann won that first fight with Cantwell in March of 2007, knocking his foe out in 41 seconds. Three fights later, he was the WEC light heavyweight champion, knocking out Doug Marshall in 95 seconds in March of 2008. He would lose the belt five months later in a rematch with Cantwell, but the die had already been cast: Brian Stann was a mixed martial artist and one of the sport’s rising stars.

The “All-American,” who also garnered headlines for his pre-military stint as a linebacker for the Naval Academy, had a rough start to a UFC career that began in 2009, going 2-2 with wins over Cantwell (in their rubber match) and Rodney Wallace sandwiched by losses to Krzysztof Soszynski and Phil Davis.

But a move to middleweight turned things around for Stann, and three straight finishes of Mike Massenzio, Chris Leben, and Jorge Santiago elevated him from prospect to contender.

What followed were four fights in which he went 1-3, but outside of a one-sided loss to Chael Sonnen in October of 2011, Stann acquitted himself well in a knockout of Alessio Sakara and a close decision defeat to Michael Bisping before his epic clash with Silva earlier this year. It was everything Stann could have wanted in a fight outside of the end result, but he should hold his head high for being a participant in such a memorable match.

If that fight is the last picture we have of Brian Stann as a professional fighter, it’s certainly a glorious one, and one he should be proud of.