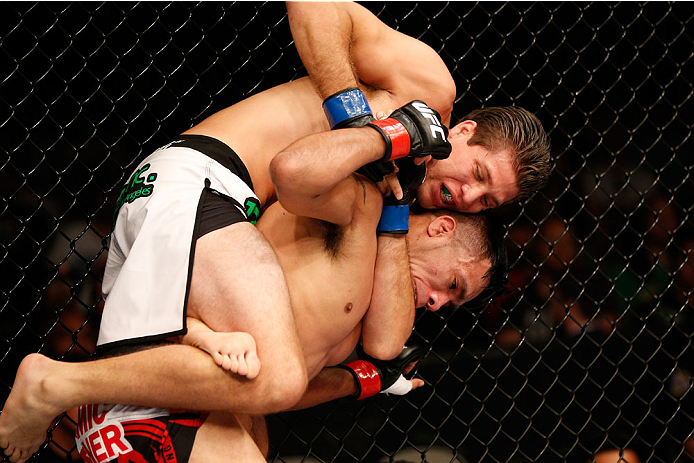 This next generation of mixed martial artists is savage, and ready to lead its charge is Brian Ortega.

At 24, Ortega is an undefeated pro making his second Octagon appearance, he’s a Brazilian Jiu-Jitsu black belt from the legendary Gracie Academy and he’s been helping the famed Rener Gracie teach self defense to law enforcement for the past seven years. If that wasn’t enough, “T-City” believes his UFC Fight Night opponent Thiago Tavares is part of the “old school” that needs to step aside for the young guns.

“This is what it is - new school vs. old school,” Ortega said. “Tavares has been around since he was 22 in the UFC. 2007? This guy has been around a long time. He’s got more fights in the UFC than I have in my professional life. This is a perfect fight because I don’t want to lose, but I have nothing to lose. That’s the worst kind of guy anywhere. On the streets, the guy you’re scared of is the guy with nothing to lose. I feel like I’m just going to go in there and just be me. And that’s where I’m the deadliest. I’m comfortable, I’m me and I have nothing to lose. This is where I can finally showcase all my skills. Let’s make this a war and let’s both get $50,000.”

To a young buck like Ortega, 30 years old with 15 UFC fights, including a Performance of the Night submission win in his last outing inside the Octagon, may sound a bit over the hill, but, more so, Tavares is simply big game that he is excited to hunt.

Last summer, Ortega was set to make his UFC debut against an incredibly tough test in The Ultimate Fighter 14 winner Diego Brandao, but Brandao had to withdraw due to injury. After being reshuffled to UFC on FOX: Lawler vs. Brown, Ortega would blitz Mike De La Torre and choke him out in 99 seconds. Now, he has his sights set on another vaunted name to propel him up the UFC featherweight rankings.

“I just think these are great names for me to test myself against,” Ortega said. “I love it. I love being the underdog. I kept thinking that if I beat Diego Brandao and finish him in my UFC debut, then people would really say there is a newcomer here. It was mostly just that I want to take out the big names. I feel like there are no easy fights in the UFC, so if it is going to be a hard fight it might as well be against someone who is well-known. If people know who they are and have seen them perform, then they will know who I am. I was just excited to get my shot to be on the big stage and prove myself and make a real statement that I belong there.”

For those who saw the Los Angeles native’s Octagon debut, they’ll remember Ortega securing a rear naked choke while latched on to a standing De La Torre like a backpack. But that is not reflected on either’s pro record as the win was overturned to a no contest after Ortega tested positive for drostanolone. It’s the only blemish on Ortega’s otherwise stellar 8-0, 1 NC record, that has also seen him earn four wins by submission. Ortega accepted responsibility for his transgression, apologized for it and has finished serving his nine-month suspension for it.

“There’s always a story, but I’d rather not make any excuses,” Ortega said. “I knew I was taking something. Whether I knew the depth of what I was taking doesn’t really matter. I take full responsibility rather than blame anyone else. It’s all on me. And I’m ready to focus on the future.”

During his time off, T-City continued to train for his own future inside the Octagon as well as helping Gracie train police officers for their future on the streets. Ortega is featured in many of the Gracie videos on Youtube, including the hilarious “Bubba Gracie” prank and the Gracie Survival Tactics video showing Ortega trying to resist arrest from two cops at the same time, which has over 10 million views. Most recently, Ortega and Gracie traveled to Baltimore days after the Freddie Gray protests to teach their principles and techniques to local law enforcement in the hope that grappling knowledge will lead to better outcomes.

“This year is actually the first year where I’m going to be teaching the cop courses by myself,” Ortega, who has assisted Rener Gracie since he was 17, said. “I’ve learned a lot. I’ve learned how to speak the language, how to communicate with cops better. Rener always said, ‘They used to teach jiu-jitsu to cops, but now we’re teaching jiu-jitsu for cops.’ Every cop doesn’t have the confidence in defending themselves or handling the situation the right way or a different way. At that time, they handle it the best way they could because they don’t have existing knowledge of what to do. They’re quicker to react with their force objects like the taser or the gun, as you’ve seen lately. I feel that if they can subdue the opponent, take them down, be confident on the ground and learn how to put handcuffs on the guy that there would be less deadly force.”

In preparation for the veteran Tavares, Ortega is busy sharpening his skills as a member of Team Black Belt Surfing at the many talent-rich gyms “The City of Angels” has to offer. For striking, Ortega hits mitts at Anderson Silva’s Muay Thai College and at the world renowned Black House MMA. On the ground, T-City has been a shining star pupil of the Gracie brothers since he was 13. While he has learned an untold amount under them, Ortega still knows who the teacher is and who the student is when they hit the mats.

“To be honest, I’m still getting beat up by them,” Ortega said. “That’s the only way I get better at jiu-jitsu and get better at fighting is by getting beat up by them to this day. I even posted a photo the other day how Rener keeps tapping me out with the same submission and I can’t figure the way out. To this day, I’m still getting tapped out left and right by them. I still feel like a white belt when I roll with Ryron and Rener. But when I roll with other black belts, it’s crazy how much I actually know. It’s just that confidence I get from them. I feel like if I can survive rolling for five minutes with them then I’m not getting tapped out by anybody in the UFC.”

This Saturday at UFC Fight Night: Boetsch vs. Henderson in New Orleans, a featherweight fracas with Fight of the Night potential will hit the main card as Ortega tangles with Tavares.