Brian Melancon: A Texas Standout Gets His Turn in the Octagon

"I want to see how far I can go and what level I can reach. I always felt
like I belonged in the UFC and I just wanted to get the chance to show
it." - Brian Melancon 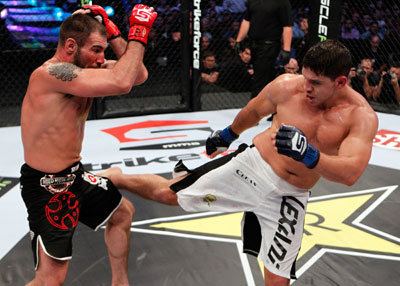 For most of the fighters on the Strikeforce roster, 2012 was a stressful year to say the least. In addition to worrying about winning or losing on fight night, there were two cancelled events and the eventual announcement that the promotion was shutting its doors, leaving fighters to wonder whether they were going to get the call to the UFC in 2013.

And when the year started, welterweight Brian Melancon was in the same boat. His last fight was a three round win over Felipe Portela in September of 2011, and he wanted to get back in action. When he did get the call for a May bout with Yuri Villefort, he had to withdraw due to injury, but what he did with the rest of 2012 varied from that of his peers.

He got married in September, took a job running a clinic, got a promotion to supervising four clinics, and basically told himself that if he got a call from the UFC offering him a fight, or telling him that he can fight once outside of the Zuffa fold and then get a UFC bout, he would take it. If not, he was fine with walking away from the sport.

“I told my manager that I always wanted to fight in the UFC and that was essentially my only goal from the beginning of when I started MMA – to fight and win in the UFC - and nothing else really mattered,” he recalled. “I said if that doesn’t happen and they don’t take me over, or if I don’t have a chance for one more fight and then I go over to the UFC or whatever the case may have been, then I probably wouldn’t have ever fought again.”

Well, one look at July 6th’s UFC 162 fight card will show you Melancon alongside Seth Baczynski on the Vegas bill. He got the call. And he took it.

“I talked to my wife and she wanted me to do it for myself,” said the four year pro. “There was no way I could let that slip through my hands and not do it. Otherwise I would have never lived with myself later on.”

There’s something about having a dream like this come to fruition that only fighters would understand. Why do this when you already have a steady job with a bright future, a new marriage, and all that good stuff that doesn’t involve cutting weight and getting punched in the face? Melancon admits that he gets such comments “all the time.”

“Even my own dad, he played football at UT (University of Texas) and stuff like that, and of all people I thought he would understand, but he’s the one who doesn’t get it the most,” laughs the 31-year-old from Houston. “He supports me and goes to all my fights and he’s a huge fan, but he just doesn’t get it. But basically anybody who really knows me knows how competitive I am, and once I set a goal or once I set something that I want to do, I pretty much put everything else aside and accomplish that goal. That was what I set out for when I first started training. I told the coach that I had at the time that I want to fight in the UFC and I don’t want anything else. That’s the only reason why I’m doing this. I could have done a lot of other things that would have been a lot easier, but it was something that I always wanted and the competition aspect of it is what drives me. I want to see how far I can go and what level I can reach. I always felt like I belonged in the UFC and I just wanted to get the chance to show it.”

He gets his chance a week from Saturday, and it’s been a long road to get here, a lot longer than the four years he’s been fighting professionally. But what has made this moment even more notable and even more worth it is that he and several of his Paradigm Training Center teammates have been together since 2006, so it’s not just Melancon getting to the UFC; it’s like the whole team, which includes Strikeforce vet Mike Bronzoulis, made it too.

“My training partners and I, we have a solid core group of 6-7 guys that have been training together since ’06,” said Melancon. “We’ve seen a lot of people come and go, we’ve had the opportunity to work with a lot of high level guys, and we could have gone to other camps and split off and stuff like that, and we’ve even switched coaches since that time. But we weren’t gonna scatter. We were all going to stay together. Me and my friend Mike especially, we looked at the AKA (American Kickboxing Academy) guys back in the day, and we want to build that on our own with a group of guys that come up through the ranks together and make big things happen together. And it’s finally coming to fruition. It’s something I’m very proud of, my training partners and what they’ve been able to do. Without them, we wouldn’t be where we are. We built this together from the ground up.”

And now they’ve got a UFC fighter in the ranks, one who has a tough task ahead of him in Baczynski, a hard-nosed vet who had a six fight winning streak snapped by a decision loss to Mike Pierce last December. A win over the “Polish Pistola” would mean a lot, not just for Melancon to say he won a fight in the UFC, but for his standing in the division. In other words, he may have to warn his bride that he could be sticking around a while.

“We know that it can go either way,” he admits. “Baczynski’s a really tough guy and a really tough opponent, so it’s a good test to see if I do belong for more than one fight. If I win this fight, it shows that I’m right in the middle of the pack right off the bat. So we have discussed that and she’s very supportive of me and she wants whatever is going to make me happy so that I can have no regrets and walk away whenever I want. For now I’m just focused on this fight and giving everything I have in it, and then after that, we’ll see.”