"I have a lot of first round knockouts, so the fight can end at anytime
and that makes it exciting. I think if you watch any of my fights,
you'll agree I'm exciting." - Brian Melancon 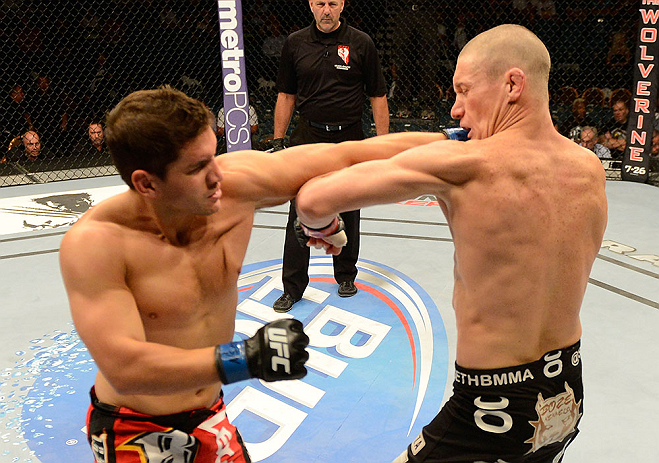 Prior to UFC 162, it had been a while - a long while - since the hard-hitting Houston native had been in the cage. The last time Melancon fought and / or won was September 2011 for Strikeforce, which means Occupy Wall Street was headlining news, “tiger blood” just turned stale, and Lebron James had a total of zero NBA championship rings. After nearly two years on the shelf, Melancon was set to make his Octagon debut against an Ultimate Fighter alum, Seth Baczynski, who had recently been enjoying a four fight win streak.

How would Melancon deal with the ring rust, the jitters, and the pressure of possibly realizing his dream of fighting and winning in the UFC? How about a one punch, ground-and-pound knockout with a single second remaining in the first round?

“It feels incredibly gratifying,” tells Melancon. “Knowing that everything I've worked for and thought I could achieve and worked to achieve for the last six or seven years was not done without reason. Everything I've done to fight - the diet, sacrifices, time away from family, missing out on other things in life - without achieving that goal, part of me would have felt like why did I do all of that if I didn't achieve that. It feels really good. Everything I did that for was worth it for that.”

With no nickname, maybe Melancon should be called the “Platinum Puncher” because his knockout power never rusts.

At 31 years old and with a pro record of 7-2, despite numerous factors working against him, Melancon looked like an Octagon veteran at UFC 162. “I just felt like I knew I was going to win and I was just calm about it,” says Melancon, whose belief in his training and his desire to compete are what kept any jitters at bay. “I never feel nervous before fights because I'm in this for the competition and the excitement. I guess the way I look at it is, enjoy the ride because the hard work is done. When the fight comes, I don't think you need to be still thinking about what to do and if you're going to have ring rust because I think you're going to react to how you trained, and I felt I trained well and prepared well.”

As for the fight in particular, Melancon gave up several inches in height and reach to “The Polish Pistola”, but that advantage quickly dissolved after Melancon belted Baczynski with a solid left. “The first left hook I landed right at the beginning of the fight, it kind of wobbled him a little bit,” remembers Melancon, whose previous Strikeforce opponent and current UFC lightweight Isaac Vallie-Flagg revealed Melancon hit harder than any of the other pro fighters he’s faced. “I saw [Baczynski] react to it, so I kind of knew that 1) I could get his timing and range down, and 2) that it was going to be effective when I hit him. I felt good.”

The finish of the fight featured Baczynski on his back with Melancon standing over him with only seconds remaining. Melancon tried to control and fend off Baczynski’s long legs while looking for an opening to do a little more damage before the break for round two. And do damage he did. Melancon saw his opportunity and delivered an enormous overhand left, which turned off Bacynzski’s lights and prompted an end to the bout. In his elated post-fight questioning, Melancon mentioned that he learned tactics like that from watching one of the all-time greats and, arguably, the owner of the most devastating ground-and-pound attack ever, former PRIDE heavyweight champion Fedor Emelianenko.

“Fedor was my favorite fighter,” explains Melancon. “I thought he was the best and still do. I thought he was the best fighter of all-time because he was really the first one to put everything together seamlessly. His style is not technically perfect in each discipline, but it's perfect for MMA. The way he chain fights from one position to the next, he was never really in a bad position. His ground and pound is the same way. I drill that punch that landed all the time. I have his book and I've watched tape on him on how he does certain things to prevent from getting submitted. That's the type of things he does in his game that I try to practice and drill.”

The punishing punching power isn’t simply an attribute of Melancon’s, it’s a necessity for the 5-8 welterweight, who generally finds himself against taller opponents. “Whenever I do land a punch, it has to be more effective than a normal jab or a jab-cross combination,” asserts Melancon, who early on worked a lot with rangy lightweight Lee King on countering reach by creating torque when slipping punches. “I have to make it count is what I'm trying to say. If I try to go tit for tat with each tall, lanky guy with crisp standup, then I'm going to get slowly picked apart with their range and how they move. I just make it count whenever I do land, so that it changes that aspect of the fight.”

Up next for Melancon is a short turnaround to take on the most recent TUF winner, Kelvin Gastelum, at UFC Fight Night on August 28th. The youngest competitor and champion in the show’s history, Gastelum is an undefeated, 21-year-old prospect from Arizona. While successful on TUF as a middleweight, Gastelum is making the drop to welterweight and, originally, was scheduled to battle Paulo Thiago. An injury sidelined Thiago, making Gastelum’s first test outside of the show the reborn wrecking machine Melancon.

“I only took a week off from training and ate what I wanted to for that week, but, after that, I got right back to work and got my diet right back up,” tells Melancon. “I wanted to stay in shape because I know the UFC always has injuries. It was funny, I saw that Paulo Thiago got hurt on the internet, so that night I was thinking they will probably call me about that fight and I looked up Kelvin and his record and some of his videos. I had seen one or two of his fights from the Ultimate Fighter. I wanted to look at him a little bit more. Sure enough, the next day they called me up about it and I thought it was a great opportunity. I respect him a lot. I know he's a young guy. He took on all comers at a higher weight class, so you have to respect that. He's got some good boxing and footwork and wrestling. He's pretty aggressive, so I think it will be a really good fight, a really good matchup.”

In preparation for Gastelum, Melancon keeps his training camp local at Paradigm Training Center in Houston. On the mats, Melancon tangles with Maryland Wrestling Hall of Famer Grant Johnson and BJJ black belt Igor Santos. On the mitts, Melancon keeps his striking sharp and MMA game ready with fellow fighters Angel Huerta and Jeff Rexroad. When he isn’t in the gym with those men striving to be better fighters, Melancon is helping a former UFC fighter who is striving to make a better planet.

“Justin Wren is doing great work in the Congo with ‘Fight for the Forgotten,’” states Melancon. “Freeing slaves and building a sustainable way of living for these people, who've dealt with some of the most horrible atrocities in the world. He's actually leaving for a year in September and I wanted to partner with a charity that was doing good work. I feel like the people who have the opportunity should use that to further causes that need to mentioned and help those that are less fortunate than us. I was looking for a charity to partner with and I saw some of the videos that Justin was doing on the Underground. I really kind of took to it and wanted to get involved. I contacted him and told him I was going to be fighting in the UFC and I wanted to help out any way I could and put him on my banner and get the word out.”

On August 28th in Indianapolis, Indiana, a welterweight war will be waged when Melancon squares off against Gastelum. “If you've seen his fights, he comes forward and they're action-packed; if you've seen my fights, it's the same way,” affirms Melancon, who got back on the bike with an impressive victory last month and is ready to ride right over Gastelum for win number two. “It’s two up-and-coming fighters who are looking for bigger things. I have a lot of first round knockouts, so the fight can end at anytime and that makes it exciting. I think if you watch any of my fights, you'll agree I'm exciting.”