When Brian Kelleher's original UFC Vegas 9 opponent withdrew, he had no plans of patiently sitting out Saturday's Fight Night
By Gavin Porter, on Twitter: @PorterUFCnews • Sep. 4, 2020

For a brief moment it looked like Brian Kelleher was going to spend the weekend enjoying good food and watching the NHL playoffs rather than getting in a fistfight.

Earlier this week, Kelleher found out that his UFC Vegas 9 bout with Ricky Simon was off when Simon was withdrawn from the matchup.

Naturally, “Boom” was disappointed that the fight was cancelled but he let the UFC know right away that he would take on whoever the promotion could safely put him in the cage with. The UFC followed through and now Kelleher will welcome newcomer Kevin Natividad to the highest level of mixed martial arts.

It’s that mindset, the “fight anyone at any time” mentality, that has Kelleher competing in his third fight since the UFC kicked off their spring / summer schedule in May. 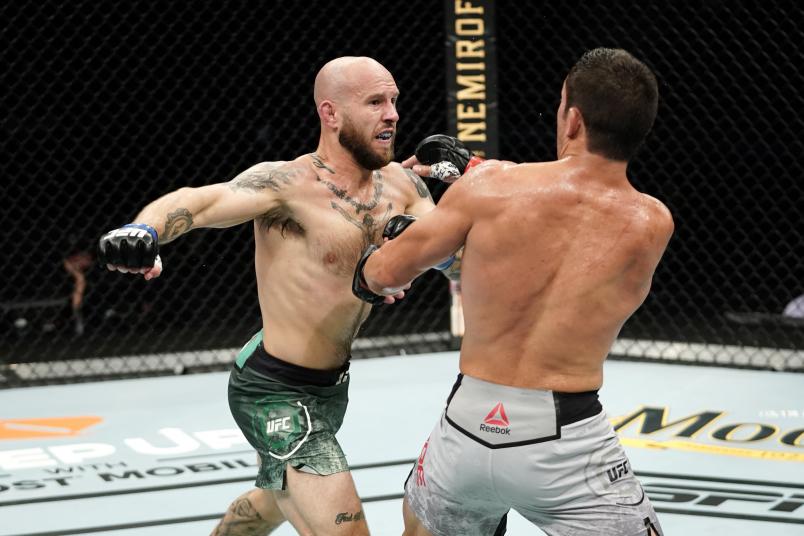 JACKSONVILLE, FLORIDA - MAY 13: (L-R) Brian Kelleher punches Hunter Azure in their featherweight bout during the UFC Fight Night Event at VyStar Veterans Memorial Arena on May 13, 2020 in Jacksonville, Florida. (Photo by Cooper Neill/Zuffa LLC via Getty I

“In this business, you have to believe you can beat anyone, and if you aren’t thinking that, then you’re in the wrong business,” Kelleher told UFC.com about accepting a new opponent mid-fight week. “I didn’t care who it was. I’m treating this as my lifestyle and if they call me with an opportunity, I’m taking it. I’m always going to be the guy that will be willing to step up and I think the UFC appreciates that.”

The last time we saw Kelleher he came out on the wrong side of a decision against top ten bantamweight Cody Stamann at UFC 250. Having the chance to fight a contender like Stamann showed Kelleher that his mindset and talents have him going in the direction that he wants.

“Boom” chalked the defeat up as a learning experience and he’s confident that he will be able to use those takeaways to continue his assault on ranked bantamweights.

“Every fight is your most important and if you’re going to get a top contender you obviously want to beat that guy to make a run at the title and that’s the chance I had against Cody,” Kelleher said. “I tried to take him out. The entire fight I was trying to finish it, I never considered outpointing him or whatever. I’m proud of that performance and I never felt outclassed in there. Now I can take details away from that fight and apply them to when I’m in similar situations against contenders down the line.”

Before he gets another shot at a ranked opponent, Kelleher will have to take Natividad out in the UFC APEX on Saturday. Kelleher understands that this fight is what Natividad has been waiting for his whole career and he doesn’t plan on letting “Quicksand” make a name off of him.

“This sport is so unpredictable, and you can’t take any opponent for granted. So when a guy like Natividad gets a chance against me, a guy going into his tenth UFC fight, he has nothing to lose,” Kelleher said. “Winning is all that matters and I’m going to do that on Saturday and I’m going to be on cloud nine with my performance.”

“I’m going to keep showing everyone why I belong right there with the division’s elite.”