Brian Kelleher fought twice last year, logging an appearance in February and another in August.

This weekend, “Boom” will make his second start of 2022 against unbeaten prospect Umar Nurmagomedov, and the 35-year-old veteran couldn’t be happier.

“It’s very important for me because I believe in momentum, “ said the Long Island native, who carries a 24-12 record and a two-fight winning streak into his clash with Nurmagomedov on Saturday. “Coming off a couple wins and being able to stay active, fight as frequently as possible, especially at my age — I’m older in the game; I feel great, but for a bantamweight, 35 years old, you never know how much time you have left.

“I’m trying to get four fights in this year,” he added. “If I can, I’ll even do five because as I’ve gotten older, I’ve learned how to train smarter, which has enabled me to be able to take fights on short notice and stay active.”

Not only has Kelleher shown that he’s ready to jump on short-notice opportunities, but he’s also proven to be flexible about weight classes and opponents in the late stages of fight week, as well.

Just a few days ahead of their clash in mid-January, Saidyokub Kakhramonov was forced out of his matchup with Kelleher, momentarily leaving the veteran without a dance partner. Fellow veteran Kevin Croom stepped up, the two agreed to face off at featherweight, and Kelleher ventured up a division to collect his second straight unanimous decision victory

“I’m proud of that aspect of the game for myself — being willing to fight all comers, being willing to take short-notice fights and opponent switch-ups, things like that,” said Kelleher. “What it comes down to is that I’m a fighter — I’m here to fight, and that’s the main objective.

In Las Vegas For UFC 272? Here's The Public Events Schedule

“Whether it’s this guy or that guy, it’s not really much of a difference because you’ve got to believe you can beat anybody in this game, so I try to go in with a solid mindset and be willing to adapt and overcome, because things like this happen all the time.

In addition to being ready to deal with whatever obstacles may come his way in the days leading up to fight night, the active and energetic veteran also fully understands his current place in the bantamweight ecosystem, and welcomes the opportunity to share the Octagon with the undefeated Nurmagomedov on Saturday.

“The UFC gives you your opportunities,” began Kelleher, who has gone 5-2 over his last seven fights. “If you win big fights and you ask for what you want, usually they’ll give you that chance. I’ve had chances at fighting Top 15 guys and came up short, and then they’ll kind of reset me and give me that young guy that’s coming for my spot, and that’s motivating.

“I look at this fight as a similar thing where it’s this undefeated, younger guy and they’re trying to see where I’m at.”

“I see that all the pressure is on him,” Kelleher said of his undefeated opponent. “I’ve been there, I’ve taken my losses, and in this sport, you have to learn how to lose.

“You’ll see fighters lose and they’ll completely fall apart. I’ve been the opposite — I’ve taken my lumps, I’ve lost, but I’ve come back stronger each and every time, accumulating wins after those losses.

“For me, he’s a guy that wants to keep that undefeated streak,” he added. “Khabib went his whole career undefeated and this is his younger cousin that probably sees himself doing the same thing.”

Coming up on the 11-year anniversary of his first professional fight — a loss to Dan Cion in Chester, Pennsylvania — the older, wiser Kelleher is also motivated by the steady stream of young fighters making their way into the gym these days, nipping at his heels.

In a sport that can grind you down and a career that can leave you running on fumes at times, getting that push from the younger set can help recharge the batteries for the older guys in the room.

“Lately I’ve been training with a lot of guys that are younger than me, that are coming up, wanting to be where I’m at,” said Kelleher, who admitted to having felt burnt out at times in the past. “I think what has played a huge role in my success lately is being around that energy — where I was when I first got to the UFC and was trying to get there. 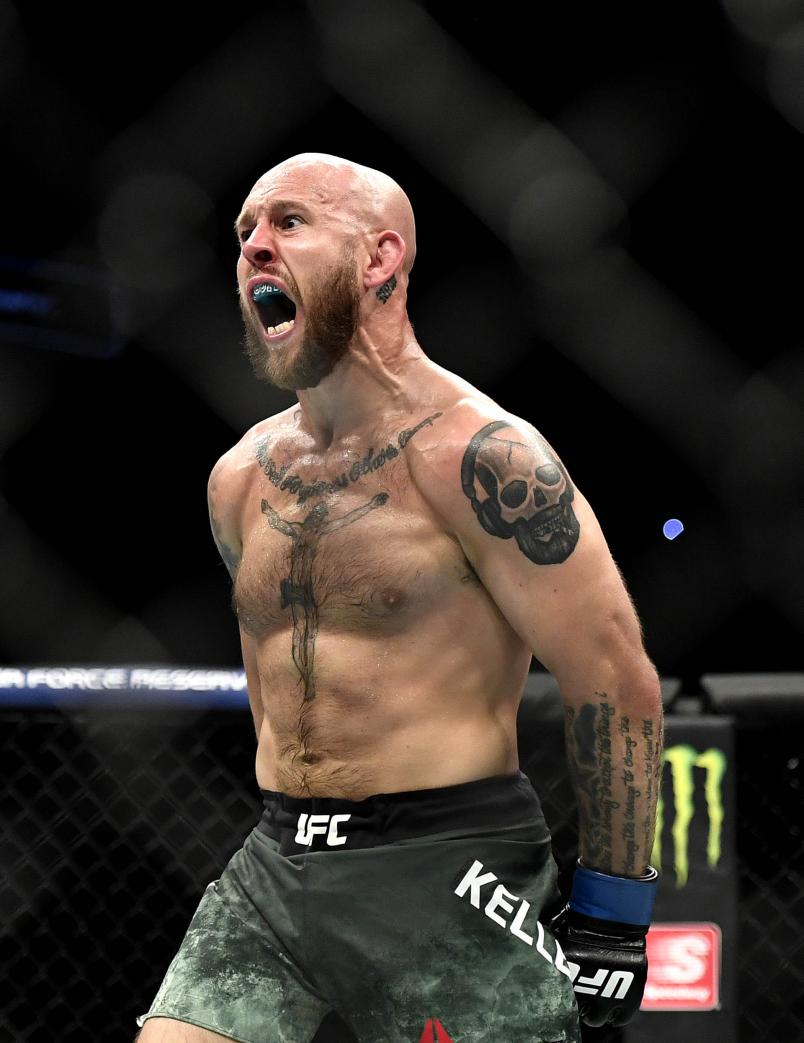 Kelleher celebrates after defeating Hunter Azure of the United States in their Men's Bantamweight bout during UFC Fight Night at VyStar Veterans Memorial Arena on May 13, 2020 in Jacksonville, FL (Photo by Douglas P. DeFelice/Getty Images)

“These young, hungry guys that I’m sparring with are excited every time they’re at the gym and, for me, sometimes I have to rediscover that excitement, so it’s good for me to be around those guys to keep myself motivated and excited.”

Amped up by the energy in the gym, bolstered by a dominant victory earlier in the year, and excited by the matchup in front of him, the confident and experienced Kelleher can’t wait to get back out there this weekend and introduce himself to the undefeated Nurmagomedov.

“He’s going to underestimate a guy like me that has taken some losses,” he said of his unbeaten foe. “He probably thinks he can run through me, but I have a lot of experience over him and that’s going to play a factor in this fight.

“Obviously he’s confident and he’s never faced defeat, so I’m excited to give him a tough test and show him who I am. It gives me motivation to steal his ‘0’ and give him his first loss.”