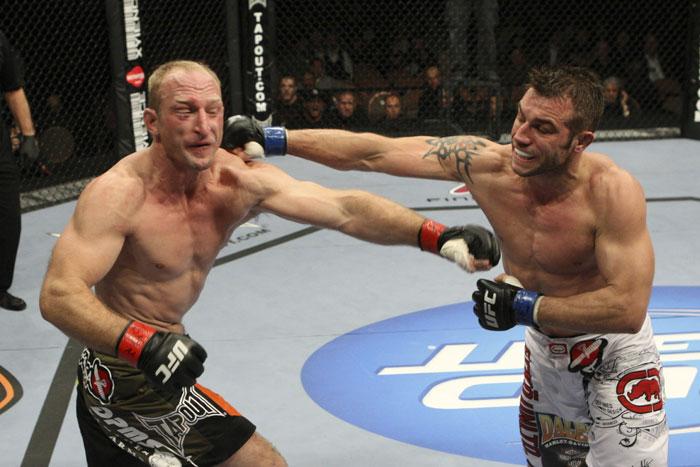 (After this piece was posted, it was revealed that due to injury, Brian Foster was forced to withdraw from his UFC 129 bout against Sean Pierson on April 30th. A replacement opponent for Foster is currently being sought.)

When Brian Foster talks about his brother Brandon, it’s almost as if he’s in the same room.

In a way, he is, because the UFC welterweight takes a bit of his little brother everywhere he goes, whether it’s in the form of a picture, an old football jersey, or as one of those clichés where you say that you have someone in your heart at all times.

It’s not a cliché to Foster though, and when you put the term “UFC welterweight” in front of his name, it’s a badge of honor that would have never been earned if not for the tragic events of April 30, 2006, when Brandon, just 20 years old, fell to his death when some rocks on a ledge where the two were standing gave way.

From that moment on, the only way for Brian Foster to deal with the pain of his loss was through a new vocation – mixed martial arts. That’s the name of the sport. For Foster, it was fighting, and being able to release his anger and frustration in a legal environment became his coping mechanism, not a vocational choice.

“I was doing this merely to get the anger out of me, to use it as a substitution,” he said. “I never seen me having a career in the UFC, I never seen it turning into something I would do for a long career.”

It did though, because as the years went by, Foster found out he was good at this form of fighting. It wasn’t the same as when he would get in trouble as a kid; this time there were rules, different combat sports disciplines, and referees and judges.

Not that he needed those judges. Foster was 14-3 when he got a call to compete in the UFC, and win or lose, he never heard the toll of the final bell. But when he was asked to step onto the big stage, all of a sudden everything had changed.

“When I got the call for my debut, it was a reality check,” he said. “It was like ‘okay, this is the big time, this is everything. It was an ‘either go big or go home’ situation for me.”

He decided to stay, and Foster’s ride since then has been one he’ll not soon forget. Winner of three of his five UFC bouts, the Sallisaw, Oklahoma native has earned Fight of the Night and Knockout of the Night awards, and he’s competed everywhere from Las Vegas and Austin to Auburn Hills and Sydney, Australia.

“It’s amazing,” he said. “It’s every little kid’s dream growing up – you want to travel the world, you want to see things that you don’t get to see coming up, and I love it. It’s something I got ridiculed about coming up and it was something that people just didn’t see me doing. They would say ‘This is gonna get you nowhere, fighting people,’ and ‘why do you want to be so mean?’ And I never fought for the wrong reasons; I always fought to defend myself because I was always the little guy. So for me to be able to prove people wrong, that’s a dream come true.”

It’s a dream that rose out of a nightmare, and that fact isn’t lost on Foster, who has gone from being an angry young man looking to strike out at the universe for the loss of his brother and best friend to a mature 27 year old just trying to make a living while setting an example for his son.

“Now, it’s about being the person everybody knows than I can be,” he said. “I don’t use the whole anger thing anymore, and I’m trying to be a better person, somebody my son can look up to and a better mentor to these fighters here (at the H.I.T. Squad gym). Mixed martial arts has done that for me.”

On April 30th, Foster steps into the Octagon at Rogers Centre in Toronto for his sixth UFC bout, this one against hometown favorite Sean Pierson. It’s the fifth anniversary of Brandon Foster’s death, and instead of dreading the day, he’s finally reached the point where he can embrace it and move on.

“I’m excited about it,” said Foster. “I rode that wave of aggression, using him as my motivation for the last five years, and he’s still gonna be my inspiration and my motivation, but at the same time, I’m looking at this as a way to put him to rest and kinda be a new person. This is about letting all my anger out of me and growing past it.”

If you’re looking for compelling storylines for the welterweight matchup, you’ve found it, but there’s also plenty of emotion on the other side of the Octagon, as Pierson, one of Canada’s MMA pioneers, will fight in his home province for the first time, and in front of 55,000 of his closest friends to boot. It’s almost as if there will be too much going on in the combatants’ heads come fight night, but Foster disagrees, believing that the vets will use their individual motivations as just that - motivation.

“I think sticking all that to the side and getting the job done is gonna be pretty easy for us because we know how much is on the line and how dangerous each of us is,” said Foster. “We’re not trying to go out there and use our emotions or use the crowd.”

But what about that crowd, the biggest in UFC history, screaming for their man to bring home the victory?

“I’m excited, and that’s like a dream come true in itself to fight in front of that many people and get that many people behind you, to believe in you and know what you’re doing this for, and to possibly get to know your life story,” said Foster. “I want people to know why I’m doing this, who I am, and the person I’ve turned out to be. They’re gonna hate me going in. I’m fighting their hometown boy, and I’m sure they’re loyal fans, but they’re gonna love me coming out. I’m a guy who puts it on the line and I fight for it. That’s just my style.”

It’s a feast or famine proposition for Foster every time out, but whatever the result, it’s usually a fight you’ll be talking about on Sunday morning. He’s gone to war with Rick Story, knocked out Brock Larson and Forrest Petz, got submitted by Chris Lytle, and turned the tables and showed off his own submission game in forcing Matt Brown to tap out. Against Pierson, expect more of the same.

“I’m gonna fight the same way every time, like I’m fighting for my job,” he said. “The UFC is the place I want to stay; they treat me right, better than any other organization in the world, and that’s why they’re the best. And I feel that every time I come in there, I’m fighting for my job. This guy’s trying to steal my spot and he’s trying to move up the ladder a little quicker than I am. This fight’s probably not gonna move me up the ladder, but it’s definitely gonna put me a little deeper in the mix. And I’m gonna fight the same way I fight every fight – I’m gonna finish you or you’re gonna finish me, and the fans love that and the UFC apparently loves that. That’s me and that’s the style that I’m gonna keep.”

And though he never saw his brother competing under the bright lights in the UFC, you get the impression that Brandon Foster would have loved the whole rollercoaster ride. Brian Foster confirms that impression.

“I think he (Brandon) could have been the Don King of MMA,” he laughs. “I’m serious, that kid would have used every word in the dictionary and he would have done the speaking for me. He wasn’t a very big fighter himself, but he could talk your ear off. He would make you so mad, he was like the Josh Koscheck of my life, straight up. (Laughs) He would have loved it. He was my biggest fan even before I knew I could fight, and he never got a chance to see it. That’s why when he died, I told everybody, I’m gonna change my life, I’m gonna do something I think he would have been proud of, and I think I’ve succeeded. I think he’d be proud. I think he’s up there in Heaven smiling and saying ‘that’s my boy.’”