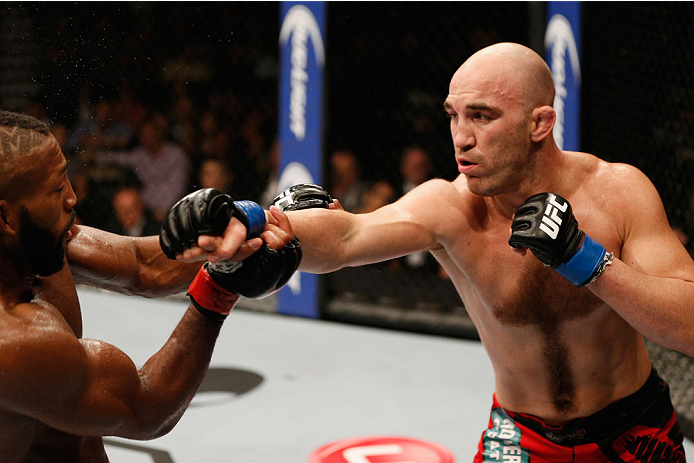 It wasn’t 2011 all over again, but as a veteran of the sport, Brian Ebersole will take a win any way he gets it. That doesn’t mean that his UFC 178 split decision win over John Howard last September was one for his personal time capsule.

“I definitely didn’t gain any momentum from that fight,” he said. “That’s okay, I’m on to the next chapter soon enough.”

How soon? Try Saturday soon, as the Indiana native travels to New Orleans to take on Omari Akhmedov in a pivotal welterweight matchup. If Akhmedov wins, it’s a big name notch in his belt. If Ebersole leaves the Big Easy with his hand raised, he gets a step closer to rebuilding the momentum he had in 2011 and the early part of 2012. Then, he was unbeaten in his first four UFC fights, picking up bonuses for beating a speedo-wearing opponent (Dennis Hallman), and making a permanent impression with fight fans for shaving an arrow in his chest hair that pointed to his chin.

In short, he had the back story, the experience, the skill and the charisma to make some noise at 170 pounds. So what happened?

“I was 4-0 and I messed up and took a fight on short notice after having two weeks post-fight to relax and rest on my laurels after the (TJ) Waldburger win,” he recalls. “Then I jumped at the chance to fight James Head and lost a split decision by not fighting the way I should have fought and that pretty much ruined it.”

A subsequent defeat to Rick Story over a year later put another dent in Ebersole’s plans, but he’s never been one to take the easy road. One look at his 51-16-1, 1 NC record he compiled over the last 15-plus years will make that abundantly clear.

“I used to put them together every other weekend back then,” he laughs. And though he made his bones on the local circuit in the Midwest and even Mexico, it was Australia where he found his home for several years.

“I love Australia,” Ebersole said, and though the MMA scene when he debuted there in 2006 wasn’t what it is today, he found a way to make it work.

“Part of it was being able to freelance and freestyle as a coach in Australia,” he said. “That really helped me open up the travel thing. I logged my time in and out of the U.S. just recently, by going through my passport stamps. My gosh, I’ve had a lot of flights.”

So many that he just received 24 new pages for his passport. But to build up those frequent flyer miles, there had to be a plan in place.

“In the end, every time I flew somewhere I tried to make the most out of that flight,” he said. “It’s not always worth flying somewhere for a couple hundred bucks and staying a few days. The first time I went to Australia, it was a $2000 flight and I made $700 for my fight against Kyle Noke. So was it really worth $3000 for that promoter to bring me over for the weekend? Not really. But it was worth it if I said I’d fight for you a second time and I’ll stay in your gym so you won’t have to put me up and harbor any expense and neither do I, and I’ll help teach some of your classes. So I’ve taken that model with every other trip I could. If I’m flying all the way there, I might as well spread myself out and make it worth it financially for everyone involved.”

These days, the traveling has died down slightly, with Ebersole even spending the training camp for the Akhmedov fight in Chicago. He even expects to move back to the States with his wife given the high price of homes in Australia. Does that mean he’s gearing up for another run at the belt?

“I don’t think I have time to make a run, to be honest,” he said. “So I’m just going to win the fights and be happy, do my thing and not worry about it. When the body says I’m done, I’ll be done.”

Maybe, but just a couple years ago he won four straight, and with a couple more it could have been time for a shot at the belt. Why not this time.?

“I was healthy for a while. That was the big part.”

Is he healthy now?

“Mostly,” he chuckles, and that’s why that despite his feelings on the matter, Ebersole could make the type of comeback that captivates the fans of this sport. He’s no nonsense, but with a sense of humor, which covers the marketing end of things. As for the fighting, he’s got the experience and unorthodox game to give anyone at 170 pounds a rough night. Put it all together, and Saturday night just may be the start of something special. Would he mind? Probably not.