Brian Ebersole: The Bad Boy is Back

"I still have time on the clock, I’m still a pretty darn good athlete, and no one’s given me a reason to consider stopping." - Brian Ebersole 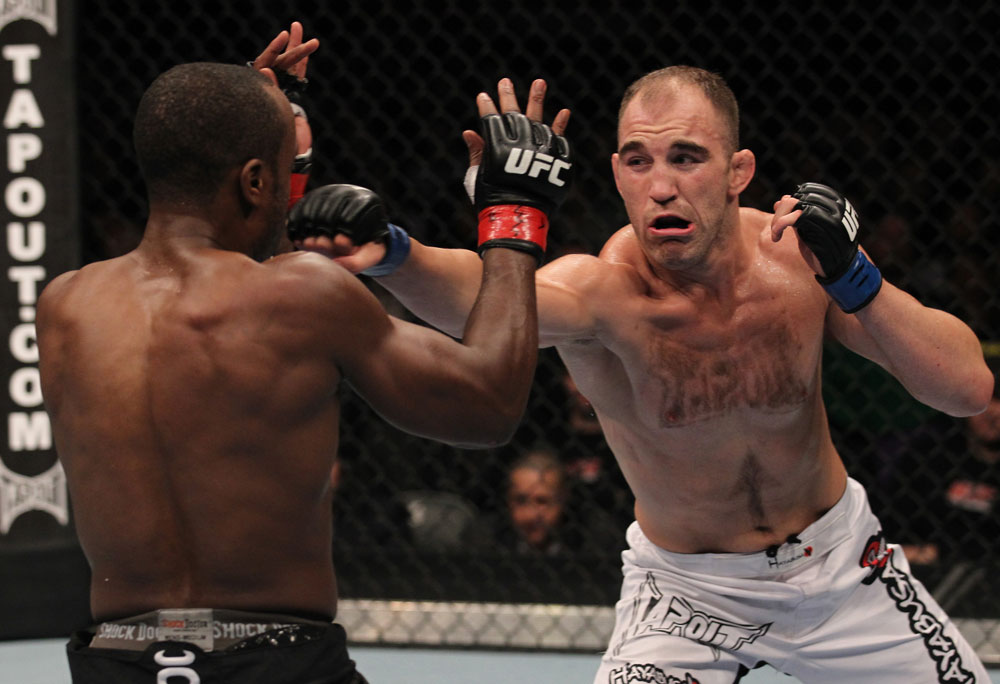 It’s been a long, strange trip back to the Octagon for Brian Ebersole, the welterweight veteran who returns to active duty for the first time since July of 2012 when he takes on Rick Story this weekend at UFC 167 in Las Vegas. But then again, life has been a long, strange trip for the Indiana native who has sported a “hairrow” on his chest, compiled nearly 70 fights since turning pro in 2000, and has made his home in such exotic locales as Australia and Thailand.

And it’s in Phuket where the 32-year-old spent the last year, teaching at the Tiger Muay Thai camp with UFC vet Roger Huerta as he rehabbed the injury that kept him sidelined since the lone loss of his five fight Octagon career, a split decision defeat against James Head at UFC 149. Oh yeah, and he also got engaged.

So while Ebersole certainly didn’t remain idle, he did watch the welterweight world go round during his absence.

“It’s frustrating as can be,” he said. “On one level, the career side of things, you want to be in there and you want to have a fight and I want to make the most of my youth and do it while I can. This isn’t something I can do when I’m 50, looking in hindsight and going ‘oh, I want to go do that.’ I might be able to go back to college someday, but I can’t go back to MMA. So it was definitely a struggle watching the world go round, more so just being on the mat on the day. Yeah, there’s the career side of things, but just being around the sport all the time made it tough. Maybe if I was doing a 9 to 5 selling real estate or doing something a bit different, you can think about it during the day, but you don’t get to smell it, touch it, look at it, and still have to refrain.”

Eventually, Ebersole would get the green light to resume hardcore MMA training and soon after he got a fight with Story. It’s the kind of matchup that will determine immediately whether Ebersole is ready to resume his career at the level that saw him win his first four UFC bouts. In other words, it’s a risky fight, but one that the veteran craves because of the reward that comes with the risk.

“I’m definitely champing at the bit for this opportunity,” he said. “I used to say this when I wasn’t in the UFC, that some wins just don’t matter. You’re expected to win, you go in there, and it’s a payday. Nothing more on your profile, and it doesn’t make anyone look at you any different. If you lose, it’s catastrophic, so some of those fights were the pressure-filled ones. But this fight against a guy with such big wins in the UFC, if I beat him, it’s a big story, and it works for me. This win matters, it raises my profile and it gives me some legitimacy toward my claim that I’m one of the better guys in the division.”

And despite putting in enough time in this game to fill a half-dozen fighters’ lifetimes and building enough of a reputation as a coach that a permanent, full-time gig in Thailand could most certainly become a reality, Ebersole, as Rocky Balboa would say, still has something left in the basement.

“I just went 4-0 in the UFC, and my last fight I didn’t lose that fight, and I don’t think out of ten times I’m gonna lose too many in that battle,” said Ebersole. “Not to take anything away from James (Head), he’s a talented athlete and I think he’s got a long way to go before he reaches his full potential, but having such a good run and being at a weight that I’m making very easily – and I think I can get to lightweight - I think there are some challenges there and I match up very well against those top five and ten guys. Again, I can lose a split decision to anybody in the UFC, but I really don’t see myself losing too many spots if I have good training camps. I still have time on the clock, I’m still a pretty darn good athlete, and no one’s given me a reason to consider stopping.”