Brian Bowles: Allow Me to Reintroduce Myself

"I really want to come back and make a big statement – get a win, put a
bunch of wins together, and be my old self, finishing people and putting
on exciting fights." - Brian Bowles 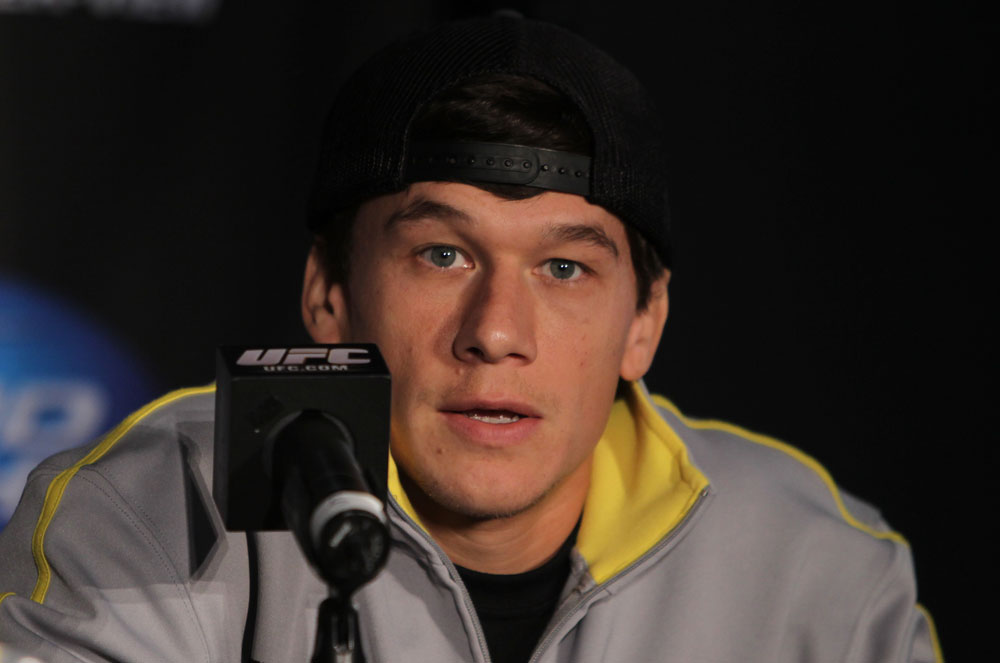 No matter your pedigree or previous success, each month spent on the sidelines in mixed martial arts pushes you further into the shadows.

If you happen to press pause on your career following a loss, your starting point in the background is a little deeper than normal too. With each passing event, another new name steps up, another veteran talent collects another good win, and your name falls out of the conversation.

Before too long, you’re the subject of a “Whatever happened to…” thread on The Underground forum.

That’s the position Brian Bowles has been in for the last 18 months. The former WEC bantamweight champion hasn’t competed since losing to Urijah Faber at UFC 139 in November 2011, a lethal mix of injuries and apathy combining to turn weeks into months, and months into more than a year spent outside of the cage.

“The grind of fighting three or four times in a year wears you down, and taking some time off got me re-focused,” explained Bowles, who returns to action this weekend against George Roop. “I really enjoy what I’m doing again now. It was getting to the point where I would go to the gym, and I wasn’t having fun.

“For me, if I’m on the grind that much, I get burnt out mentally and physically. I’m excited to be back. I feel re-charged again. I really enjoy what I’m doing again now. It was getting to the point where I would go to the gym, and I wasn’t having fun.

“All those little nagging training injuries that you acquire are all healed up, and I’m just mentally re-focused.”

With his mind and body in tune, Bowles is poised to make his return to the Octagon on Saturday. When he does, he’ll be returning to a division that is completely different from when he left it in November 2011.

Renan Barao rests atop the weight class, serving as interim champion while Dominick Cruz, the man who bested Bowles for the bantamweight strap in the WEC, continues to recover from his second ACL surgery.

One-time WEC champ Eddie Wineland has worked his way into a title shot, and talented twenty something Michael McDonald has already had his first opportunity to claim the championship as well. A new batch of contenders has emerged, a few veteran faces have returned, and – as always – perennial contender Faber continues to hover within arm’s reach of another championship fight.

A lot has changed in the 18 months since Bowles last set foot in the cage, and the 32-year-old fighter knows it’s going to take a strong showing to remind the fans that he’s a threat in the division, and a handful of impressive wins before he’s back in the title mix in the 135-pound ranks.

“I think every time you step in there you should be trying to make a statement, especially coming off a loss,” suggested Bowles, who will be entering off a loss for only the second time in his career. “People have forgotten about you, and if you come back in in a big way, with a big win, that really gets the hype behind you, and gets the people talking.

“I’ve got to get in there and kind of reacquire my confidence; get my mojo back. I’ve got to go in there, win, and get some confidence before I step up to that level, just like last time. I had two good fights, and then stepped up, but unfortunately I lost.”

The longer he remained out of action, the more those forum threads started to speculate about the cause of Bowles’ absence. Was he hurt? Had he secretly retired? Did the loss to Faber send him into a tailspin that he’s only just now coming out of?

“I tried to get on the Atlanta card (UFC 145) – with the UFC coming to Georgia, I wanted to get on it – but I was unable to,” said the Athens, Georgia resident and long-time member of the city’s HardCore Gym.

“I got staph right after that. I had a little time off, tried to come back, had a back injury, and I’ve kind of been lazy. Before I knew it, I had been out and not training for a while, and if you’ve been out for a little, it takes a good two months of training to get back into shape where you can get to even start training for a camp. It takes a long time to come back.”

The narrative surrounding Bowles’ career will shift at UFC 160 when he steps in the cage with Roop, who returned to the bantamweight division with a win earlier this year. Rather than “Whatever happened to...?” the question will shift to whether or not the former champion is capable of scaling the mountain once again.

He’s been waiting for the opportunity to start answering that question for a couple months now, and is committed to using his pairing with Roop Saturday in Las Vegas as the starting point of another trek to the summit of the bantamweight division.

“I got offered several opponents before that, but they just happened to fall through. Then (UFC matchmaker) Sean (Shelby) called me up and said, `Roop said he would take it; he already said he’s in.’ I said, `OK – I’ll let you know tomorrow; I have to talk to my camp, and then I’ll let you know what’s up.’ The next day, it was on.

“It’s the classic tall, long guy against the short guy,” laughed Bowles, who stands 5’7” tall, a full six-inches shorter than Roop. “I just can’t stay out at the end of his jab. He’s been throwing some uppercuts; he likes to come in. He throws lots of head kicks – I gotta stay away from that; can’t eat those head kicks. I think he’s probably going to be trying to get some leg kicks and head kicks and keep me out at distance.

In Bowles’ mind, it really is that simple. As much as he’s worked on specific techniques and formulated a game plan with his coaches, this fight comes down to who will be able to enforce their will best, and which of these two 135-pound talents will be able to make the necessary on-the-fly adjustments to earn the victory.

“You can’t go in there, game plan a fight out, and expect to win that way. As soon as you get out there and things don’t go the way you thought, then you’re screwed. You’ve gotta know what they do, be ready for what they do, and fight. It’s not a written plan where you know it’s going to go a certain way – it’s a fight. Crazy stuff happens out there, and you’ve just got to be able to react.”

And Bowles is hell-bent on making sure that he’s the one getting his hand raised at UFC 160.

“I really want to come back and make a big statement – get a win, put a bunch of wins together, and be my old self, finishing people and putting on exciting fights.”

Brian Bowles is back, and you better reacquaint yourself with him this weekend, because he doesn’t plan on going away again any time soon.