“I expect to be on the big cards and if it’s not the main event or for a world title, then I’ve got a lot of work to do." - Brendan Schaub 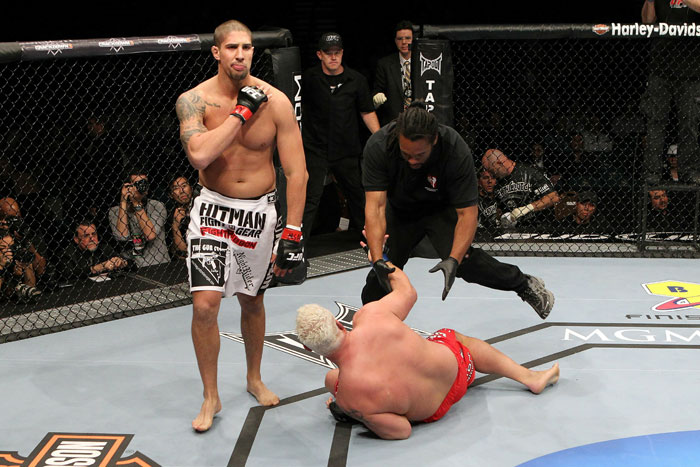 Just so you know, Brendan Schaub is a Mirko Cro Cop fan; has been even before he began fighting in 2006. The last time Cro Cop fought a fan – Pat Barry at UFC 115 – the bout was interrupted by a good natured hug between the combatants after a solid exchange in the second round.

It was cool to see two of the sport’s most feared strikers taking a brief pause from trying to punch each other in the face to say ‘well done,’ but if Schaub is taking one mantra into his UFC 128 bout against the Croatian, it’s a simple one:

“I’m pretty ferocious inside the Octagon and that kinda stuff goes out the window,” smiled Schaub. “Before or after, my hat’s off to Cro Cop and I’m definitely a fan, but when we’re in there, I definitely show no mercy and there will be no high fives or hugs.”

It’s going to be a surreal moment for the former University of Colorado fullback, who followed up his football career with a desire to do some hitting without helmets and pads. One of his early favorites was Cro Cop, whose 2006 campaign involved finishing Ikuhisa Minowa, Hidehiko Yoshida, Wanderlei Silva, and Josh Barnett en route to the PRIDE Open weight Grand Prix title. It was the crowning glory of a storied career, and Schaub watched in awe.

“He was my favorite,” he said. “I even wore a shirt that said “Cro Cop Security” and had the Croatian flag on it. When he fought Fedor (Emelianenko in 2005), I even convinced the guys who don’t watch mixed martial arts to chip in on the Pay-Per-View because I couldn’t afford it myself. It’s crazy to think back to that and now I’m fighting him.”

That doesn’t mean he hesitated when he got the call for the bout. Schaub, 8-1, has ambitions of his own, and if getting to the top of the heavyweight division means taking out a hero or two along the way, so be it.

“There’s not a lot of times, whether it’s the boxing world or at the UFC level, where you get to fight legends of the sport, so for me, it’s unbelievable and such a great opportunity,” he said. “The next morning after I got the call, I kinda pinched myself and was like ‘man, you’re really fighting Cro Cop on a huge card. I’ve never been so excited about a fight.”

Excitement about the 28-year old Schaub is at an all-time high following a 2010 that saw him finish Chase Gormley and Chris Tuchscherer in a combined 1:54 before winning a lopsided three round decision over former world title challenger Gabriel Gonzaga.

What was most impressive about the Gonzaga victory was that he did it by going past the first round for the first time in his career. It almost didn’t happen, as he nearly took “Napao” out late in the opening stanza, but the bell intervened and Schaub finally got to test out his corner stool. What was he thinking when it came to this uncharted territory?

“All right, saved by the bell,” said Schaub, who went on to dominate on his way to a clean 30-27 sweep on the scorecards. “I was hoping he’d throw more leg kicks so I could counter and finish him off, but the problem with Gonzaga is that his biggest weapon is the ground game, and it was kinda hard for me to commit to my punches and really dig in because I was worried about going down there with a guy of his caliber. For me it was just stick to the gameplan and use my movement to throw him off so he couldn’t set up his leg kicks and his takedowns. I knew I was in better shape, and whenever it goes out of the first round it’s a good thing; the longer the better for me.”

And though Schaub didn’t keep his knockout streak intact, that was just fine with him.

“It’s a huge boost to the confidence and I definitely know that I’m doing stuff right in my training camp,” he said. “This is why I train so hard for those exact moments. To finish off a lot of these guys, these are world-class caliber fighters and it doesn’t always go exactly as you planned so for me to go three rounds with one of the top heavyweights in the world was a huge confidence booster.”

A Cro Cop victory would be even bigger, and to make sure he’s firing on all cylinders against the still dangerous veteran, Schaub supplemented his usual work with Trevor Wittman and the Grudge team in Denver with some work on the east coast with some familiar names.

“For the start of my camp I went down there to work with Ricardo Almeida and Mark Henry, Frankie Edgar’s boxing coach,” said Schaub. “I really admire what they’ve done and it’s good to get out of your comfort zone and see what other camps are doing. Frankie Edgar’s a world champion and my sights are set on becoming a world champion, and that stuff rubs off.”

It could be a dangerous prospect for the rest of the division, with Schaub’s power and fundamentals augmented by some of the movement and combination punching employed by Edgar.  And that’s precisely the point for “The Hybrid.”

Evolution for a fighter also involves dealing with life outside the Octagon, and for rising stars like Schaub, that means constant pulls on his time for interviews, photo shoots, and public appearances. Some handle it better than others, and the Colorado native is a natural.

“I love it,” he said. “I love seeing the fans, they’re what makes the UFC and they’re the ones who allow me to do my job, so it’s so rewarding. I know it sounds cliché, but it really is. And it just makes you want to train harder because all that stuff comes to a real sudden stop in the fight game if you’re not taking care of business in the gym. I never forget that and my dad definitely harps on me about that stuff. Training and getting better are always my main priorities because these monsters that are out there are training when I’m doing these signings, so I definitely take that into consideration.”

That means every free moment is spent getting better, and subsequently, Schaub is now just one win away from throwing his hat into a crowded heavyweight title picture. Of course, to get there, he must beat one of his fighting heroes in a high-profile Pay-Per-View bout. His opinion? This is right on time.

“It’s easy because I expect to be here,” he said. “I expect to be on the big cards and if it’s not the main event or for a world title, then I’ve got a lot of work to do. So for me, I expect these things and when I get the call to fight the big names, I’m like ‘yep, this is right, this is the next step, and I expect to be here.’ The pressure’s the same for me in all the fights, but this is definitely a big one, I’m looking forward to the challenge, and it’s just my time. I know that and I’m gonna prove it March 19th.”