"I’ve never been more prepared in my life or more nervous for a fight, and I think that’s why I’ve trained so hard.” - Brendan Schaub 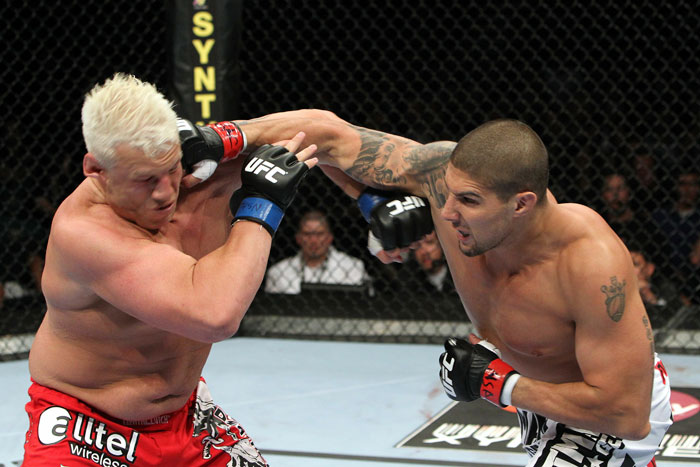 It’s a devil’s bargain for Brendan Schaub. Defeat fighters like Mirko Cro Cop and “Minotauro” Nogueira and he will accelerate his ride to a world title shot. In the process though, he may alienate a significant portion of the diehard fanbase that doesn’t particularly care to see their heavyweight heroes defeated by young guns like “The Hybrid.”

That’s a price the 28-year old banger is willing to pay though; and in fact, he understands where the fans are coming from, mainly because he’s one of them.

“I think it comes with the territory,” said Schaub. “They’re either gonna love you or hate you, and especially with Cro Cop and Nogueira, they have the diehard fans, and I’m one of them. I grew up with these guys and I was the uber-PRIDE fan, so I get it. So when those diehard fans talk trash about me, I get it and I don’t take any offense to it because I love those guys too. But I want what they have and there’s only one way to do that and that’s by going in there and beating them.”

The Colorado native tested the big league waters last October with a decision win over former top contender Gabriel Gonzaga, and then entered a whole new realm with his third round knockout of Cro Cop at UFC 128 in March. This Saturday, he will look to take out a second PRIDE legend in Nogueira at UFC RIO, and he’s pulled out all the stops to prepare for the only man to hold heavyweight titles in the UFC and Japan’s premier MMA organization.

“This one has been the roughest training camp I’ve ever had,” said Schaub. “There’s been a change of coaches, I’ve had to travel more than ever for this camp, and it’s such a high pressure and high profile fight that I’ve exhausted every option possible. There’s literally nothing else I can do. I’ve never been more prepared in my life or more nervous for a fight, and I think that’s why I’ve trained so hard.”

If you want to call that a recitation of the usual pre-fight clichés, you can, but you would be wrong. Schaub has heard all the talk about Nogueira being on the tail-end of a storied career due to a series of injuries and a seemingly endless number of wars, but then again, he heard that about Cro Cop as well, and he got a helluva fight out of the Croatian veteran before knocking him out in the final round. Luckily, Schaub said he was preparing for the best Cro Cop possible, and when he got a pretty damn good version of him, he was ready. So not only did Schaub get the win and a high profile name on his resume; he got a Master Class in high-level heavyweight MMA.

“I got out of there and told my coach ‘wow,’” laughed Schaub. “When I took him down and I got back up and I was standing over him, man, he went to town on my leg, he upkicked me in the face, and I’m just not used to that. He’s used to those PRIDE days where if you’re down there you’re getting stomped in the face. So I’m down there and I’m thinking I’m fine, and the next thing I know, a flying heel kick to my face, he hyperextends my knee, and just in the clinch, I relaxed for a second and I paid dearly for it. He threw the nastiest elbow I’ve ever seen and broke my nose pretty severely. So I think the experience I’m getting by going three minutes with Gonzaga and going nearly three rounds with Cro Cop is priceless.”

It is. Always a talented athlete with speed and power, Schaub showed the ability to dig deep in a dogfight and win against Cro Cop, and if anyone is going to have the heart and determination to take him into deep waters again, it’s Nogueira. But that’s if “Minotauro” is back to his old self after a loss to Cain Velasquez in 2010 and a series of surgeries to fix up some long-nagging injuries. Schaub thinks he is.

“If you were to base it off the Cain fight and the Frank Mir fight, you could tell that something was up,” said Schaub of the two Nogueira losses that sandwiched a compelling UFC 102 win over Randy Couture. “That’s not the Nogueira we’re used to seeing. You can still tell that he’s got the warrior heart and mind, but his body was just not responding. And I think that’s why he’s had such a long layoff, to go back to the drawing board and let his body heal and take some serious steps to get back to his old ways. And that’s what I’m expecting. I don’t think he would take this fight against a young guy like me on a four fight win streak in Brazil if he wasn’t ready. I don’t think he’s counting on letting those fans down.”

Strangely, Nogueira’s storied career has never seen him set down in his native country for a fight, and like Schaub pointed out, the Brazilian has too much pride to just show up for a paycheck in front of fans that have waited years to see him perform live. This is like a championship fight for Nogueira, and he will not stop pressing until Schaub makes him stop.

On the flip side, we may be seeing the best Brendan Schaub yet as well, but it took a lot of work to get here, especially when you realize that he revamped his training camp over the last few months to do so.

“Trevor Wittman, usually my head coach and boxing coach, he’s just a little burned out on everything, and I knew this was coming for some time now, so it’s not really a surprise,” said Schaub of the amicable switch. “He hasn’t had a lot of time with his family and kids because of Shane Carwin, myself and (Nate) Marquardt, so he’s decided to spend more time working with the lower level guys who don’t require as much maintenance. I guess we’re a little bit like divas. (Laughs) And for me, I’ve been with Trevor for over six years and we just got a little too comfortable with each other. I needed to switch it up a bit, and it was perfect timing. I went out to Albuquerque to Jackson’s to work with Mike Winkeljohn and the rest of those guys, so it’s done wonders for my confidence and my entire game in general. It’s been a blessing in disguise.”

Thankfully he can say that now. But when he made the decision to alter his camp before the biggest fight of his life, there had to be some question marks, right?

“I think most people would get shut down, but for me, I was like, this is perfect, this is the time to make the necessary changes in order to beat a guy like Nogueira,” he said. “It couldn’t have come at a better time, and that’s the way I viewed it. I think people were like ‘this isn’t good; this is the biggest fight of his life and he’s making changes.’ But I thought it was perfect. I don’t know, maybe I’m just a lunatic. (Laughs)”

Or just crazy like a fox, because no one knows what goes on in a fighter’s mind like the fighter himself. And if Schaub is happy and content with what may cause unnecessary stress in someone else’s mind, then that’s what really matters. Add in a trip to Brazil before this week for UFC RIO media activities, and Schaub is focused, yet relaxed, before Saturday’s big night.

“The biggest advantage I had was the UFC doing the honors of letting me go down there (Brazil) for the press conference,” he said. “I had never been out of North America before that, and I treated it like a fight week. I brought my coach with me, we trained about the time we thought we’d fight, and even while doing the press stuff we were still training and preparing like it was fight week.”

That was then. Now fight week is here, and in a few days, Brendan Schaub begins the walk to the Octagon to face a hero and an MMA legend. He’s made that walk before and passed the test. This one may be even harder, but this heavyweight contender has done his homework.

“I fulfilled my undergrad,” he said when asked if he’s getting his PhD in fighting from these veterans, “but hopefully after this fight I graduate.”