Brendan Schaub: Back to Work

"I have to welcome Andrei Arlovski 2.0 to the UFC and it’s a tough task,
but the way I show him the utmost respect is by going in there and just
putting it to him." - Brendan Schaub 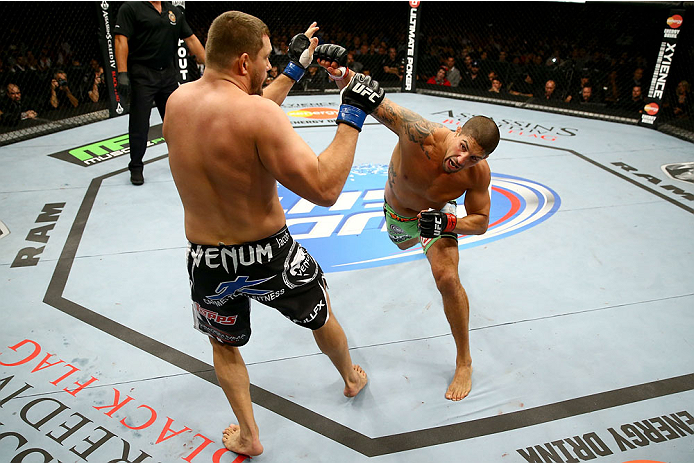 Seven missed calls later, Brendan Schaub finally got in touch with his manager Lex McMahon. After a long stretch of waiting, the news was good in late-April.

“We’ve got one for ya,” said McMahon, ending the drought that had left the heavyweight prospect without a fight since September of last year. “Andrei…”

“Arlovski?” exclaimed Schaub. Now that was good news. Not only was he back on active duty, but he was getting a shot against a former UFC heavyweight champion making his first appearance in the Octagon since 2008. That was seemingly worth the wait.

“All the big names were matched up and at this point you don’t want to just take anyone,” he said. “You want the biggest, baddest, highest-ranked guy possible.”

Arlovski fits the bill at the moment, but what originally kept Schaub sidelined after his UFC 165 win over Matt Mitrione was a mixture of business and good ol’ fashioned waiting.

“My contract was up and negotiations took a little while, then I got word that Mark Hunt was next for me in June in New Zealand,” said Schaub, who saw that fight fall by the wayside when Hunt’s injured hand wasn’t recovered in time for the New Zealand bout. Antsy and not willing to wait any longer, Schaub put his hat back in the ring for a fight, and up came Arlovski. Not a moment too soon either. Who said it was easy being a heavyweight?

“It’s always kind of been a problem,” he said. “If you look at the guys ranked in the top 15, I’ve either fought them or they’re matched up. There is a changing of the tide now, so it’s a good time to be a heavyweight, that’s for sure, but as far as matchups go, it’s a tough world out there. It can be cold and lonely.”

Schaub laughs, cold and lonely in Southern California. Yet despite being on the sidelines, he hasn’t been idle, as he’s been working on his game in the gym, and staying in the media spotlight outside of it with his Fighter & The Kid show with comedian Bryan Callen.

“In this game - and this is with all professional athletes - you have to wear many hats,” said Schaub. “I stay active with my show on FOX Sports and doing all this other stuff.”

Not that it’s been easy breaking down fights when you’re not in them, especially when it’s the heavyweight division you’re looking at.

“For me, it’s tough to sit back,” he said. “I’m in pursuit of this title and, for me, you have to believe you’re the best and believe in yourself more than anyone else. The toughest thing about sitting out is that I have to break down these other heavyweights and I’m as competitive as it gets.”

But now with a bout on the horizon again, he gets to jump into the fray again. The question is, does Schaub return as a knockout artist, or has he given up on striking in order to become a mat wizard?

“It’s funny, everybody thinks I’m a straight jiu-jitsu guy now,” said Schaub, who works with Rener and Ryron Gracie on his ground game. “I just pride myself on being well-rounded. Matt Mitrione is a tricky southpaw, very explosive, with great footwork and good stand-up. Do I have better stand-up than Mitrione? Yes. But how was Matt going to win that fight? The only way possible, unless a sniper shot me from the stands (Laughs), was for Matt to knock me out with a punch. So odds are if we went to the ground, I would say I’m definitely one of the top in the division on the ground, so Matt’s in trouble.”

He was, with Schaub submitting his former Ultimate Fighter 10 castmate at 4:06 of the first round. The win was the second straight for the Colorado native, getting him back on track after knockout losses to Minotauro Nogueira and Ben Rothwell. The next step for the 14th-ranked heavyweight is restarting his journey to the top of the division, and in his way is Arlovski.

“When he was in the UFC and he was the champ, it was Frank Mir, Andrei Arlovski, Tim Sylvia, and they were fighting each other every other weekend,” said Schaub. “So it’s a different game now. However, he’s had this long layoff from the UFC and he’s been competing all over the world, but now we’re dealing with a different Arlovski. We’re talking about an Arlovski who didn’t have a Greg Jackson in his corner before. He didn’t have a Freddie Roach to work with on the mitts, so I have to welcome Andrei Arlovski 2.0 to the UFC and it’s a tough task, but the way I show him the utmost respect is by going in there and just putting it to him.”

And after Saturday night?

“Not overlooking Andrei Arlovski, but that would be three in a row, so I’d say another big win and we’re right there.”