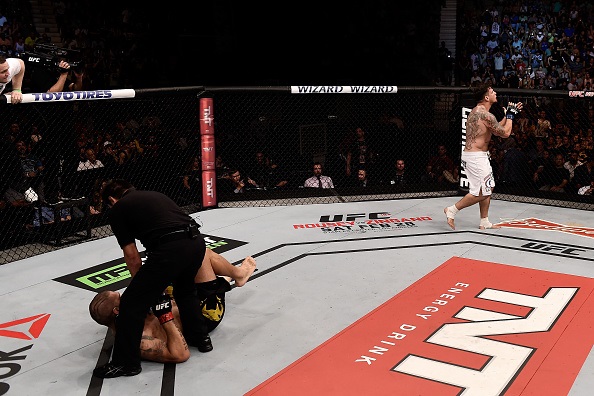 After four consecutive losses and a year off during which he considered retirement, former two-time UFC heavyweight champion Frank Mir revived his career in emphatic fashion Sunday in the UFC Fight Night main event, knocking out Antonio “Bigfoot” Silva in 100 seconds, capping off a big night for the underdogs at Ginasio Gigantinho in Porto Alegre, Brazil.

“This is me,” Mir said. “I took time off, I rested. I’m facing top five guys four fights in a row, hindered and injured and not being one hundred percent. But I have that never say die attitude where I would never turn down fights.”

He didn’t turn this one down either, but with time off, a solid training camp, and a desire to regain his status among the top heavyweights in the world, Mir showed that he still has some gas left in the tank.

Switching to an orthodox stance to start, Mir had success with his striking early, but few would have expected what came next in the second minute, as he stunned and dropped Silva with a double left, the first one missing, the next connecting. A series of punches and forearms followed, with referee Mario Yamasaki stepping in to stop the fight 1:40 into the bout.