The Breakdown: Penn vs. Fitch

BJ Penn’s UFC 127 bout with Jon Fitch may very well be the toughest stylistic matchup of his career. If I wanted to create a prototype welterweight to give Penn problems, it would be a very big, athletic wrestler who has endless cardio, good standup, and prefers to take down opponents and grind away a conservative victory.

Reads a lot like description of Fitch, doesn’t it? 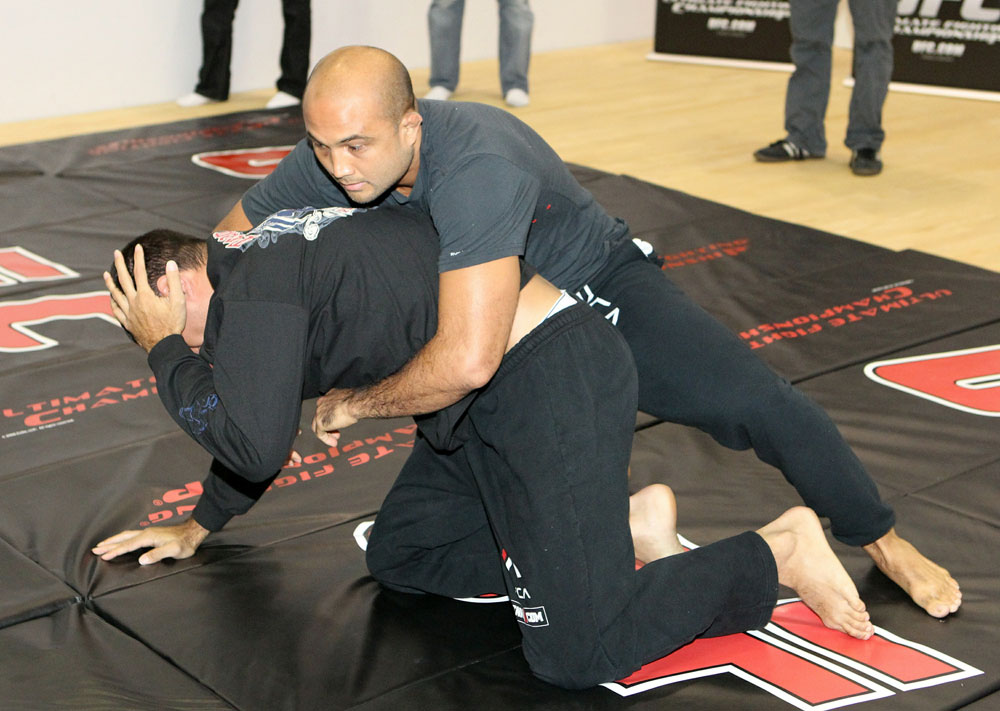 Let’s be honest for a moment. Fitch has just about every physical advantage imaginable over Penn.

He is three inches taller and enjoys a four inch reach advantage. Fitch walks around somewhere in the neighborhood of 200 pounds—a very, very lean 200 pounds. Maybe his new vegan diet has him a little lighter these days, but there is no question that he will be the heavier guy come fight time.

Fitch is definitely the stronger man. Lifelong wrestlers have a weird, almost Cro-Magnon-like core strength. I’m not suggesting that Penn is a weak guy. Not at all. He can’t match strength with Fitch, though.

Fitch also has a much deeper gas tank. Have you ever witnessed Fitch run out of gas in a fight? He looked great in the second half of his five-round fight with Georges St-Pierre, despite getting rocked in the first round. Penn cannot make the same claim. “The Prodigy” has displayed a lack of conditioning in his welterweight bouts. A lack of conditioning is the sole reason he lost to GSP in their first bout.

The physical advantage that leans toward Penn is speed. Actually, it does more than lean. Penn is a much faster athlete, both in terms of hand and foot speed. Other than Thiago Alves, Penn might have the quickest hands in the division. 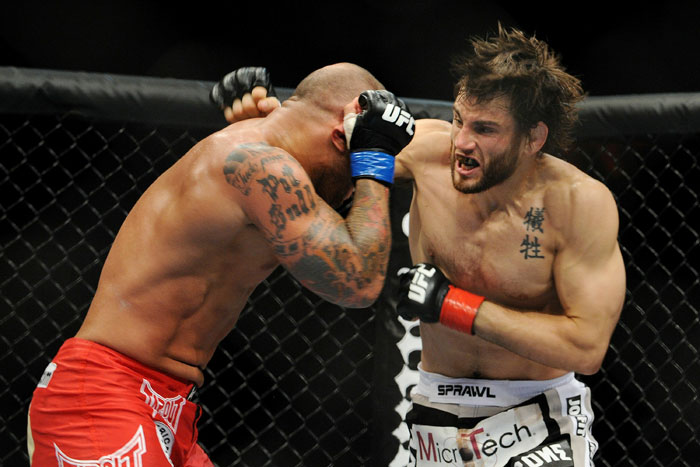 Good thing for Penn physical advantages aren’t the only thing that decides a fight. There is much more to it. Nevertheless, all else being equal, the bigger, better conditioned athlete typically wins a mixed martial arts contest – key phrase “all else being equal.”

On the skills side of the equation, Fitch obviously has the advantage in wrestling. The guy is a former Division I collegiate wrestler. He beats Penn 10 out of 10 times on an amateur wrestling mat. The only area where Penn has any chance at matching his opponent in the wrestling world is in takedown defense.

There was a time when many thought that only Chuck Liddell could rival Penn’s takedown defense. That was a long time ago. The former two-division champion got taken down at will by GSP in their two fights. Hughes took him down without much trouble in the second round of their rematch. And Frankie Edgar put him on his back many times in their two fights. That was the first time in Penn’s lightweight career that he showed any real susceptibility to takedowns.

If Penn has indeed lost some of his edge in the takedown defense world, he is in for a long night against Fitch. The former wrestler’s entire game is predicated on the takedown, and as good as Penn is on the ground, I don’t think he can survive a three-round war with Fitch from his back, despite his legendary defensive guard.

Keep in mind that virtually all of his ground-based wins came from the top position. He has never really shown much of an affinity for weathering punches and elbows from his back while looking for a submission. But that is exactly what he must do if he finds himself on the wrong end of a takedown.

In that instance, Penn must stay aggressive, both with submission attempts and scrambles.  The former champion’s flexibility in his lower limbs allows him to masterfully use the butterfly guard to execute sweeps or scramble back to the feet, and the rubber guard to control his opponent or lock in submissions.  Fitch will need to defend both, though the rubber guard will present more danger in terms of submissions, as it is an excellent set up for a variety of fight-ending holds, including armbars, triangle chokes, omoplatas and the much maligned gogoplata.

Penn has the skill to pull any of those off at any time, even against a seasoned veteran like Fitch.  But sweat will begin to work against him as the fight wears on, so Penn should not willingly succumb to takedowns, particularly in the second half of the fight, or he runs the risk of losing to Fitch on the cards.

Keep in mind, though, that a submission from his back is far from guaranteed. Fitch is a jiu-jitsu black belt under Dave Camarillo, one of the very best JJ teachers on the planet. In fact, Fitch is the first student under Camarillo to go from white belt to black belt under his tutelage. Many have tried that feat. Only Fitch has accomplished it.

Rest assured, therefore, that Fitch will be very tough for Penn to submit, particularly when Fitch is pounding away from the top position, for two reasons. First, he keeps his ground-and-pound attack very short and tight. Second, he uses the fence at every opportunity to smother his foe, thus largely neutralizing flexible, active hips, which, in turn, makes submissions very unlikely.

Unlikely, but not impossible due to Penn’s nearly inhuman flexibility.

Penn is so flexible in his hips and knees that it seems as if his joints are made of rubber. I know that isn’t possible, but I don’t know how else to explain the positions he puts himself into. The guy can literally stand on one leg and touch his foot to his face without bending over. Actually, a better example might be Penn laying on his back and feeding himself a french fry while using only his feet.

That flexibility, combined with his otherworldly BJJ techniques, makes Penn an almost impossible puzzle to solve on the ground. So, I don’t see Fitch pounding him out or submitting him, absent Penn running out of gas. The problem, though, is that Penn’s defensive guard is so good that he tends to rest from his guard, and that will lead to disastrous results against a grinder like Fitch.

All that begs the question what does Penn need to do to win? Two words: counter uppercut.

Fitch is one of those guys who has tremendous standup in the gym. Trust me on that one. I’ve seen him spar many times. I know Fitch’s standup improves each fight. I know that because his work ethic combined with the expertise of the coaches at the American Kickboxing Academy eliminate all other results from the realm of possibility.

Yet, for whatever reason, he doesn’t bring his standup A game into the Octagon. I don’t think he has ever looked anything close to comfortable on his feet in a real fight. In fact, Fitch 2010 didn’t look as clean and fluid on the feet in his actual fights as he did in the sparring gym back in 2005.

Penn, on the other hand, might have the best pure boxing in the UFC. World renowned boxing trainer Freddie Roach thinks so. I tend to agree.

Penn has an outstanding jab, one that can dominate a fight against an equally sized or smaller opponent. His right hand has dynamite in it. Just ask Matt Hughes, who got his lights turned out 21 seconds into the first round of their rubber match from a single right. Say what you will about Hughes being on the downside of an illustrious career. It was only the guy’s fourth knockout loss in over 50 fights and the first from a single punch.

Penn also has a varied arsenal of left hooks, bolo punches and, of the utmost importance for this fight, uppercuts with both hands.

The one thing that I notice again and again in recent Fitch fights is that he likes to lead with his right hand, especially when he is throwing it to close the distance for a clinch or double-leg takedown attempt. When he leads with his right, he ducks his head a little to his left side.

Penn can bring the night to a sudden end if he is able to time Fitch’s lead right with a counter right uppercut. He will need to slip ever so slightly to his right as he is throwing the punch in order to ensure that he lands cleanly and also avoids a clinch in the event that he misses. But that is his money move for the night.

If I’m Penn, I do that again and again, looking for the knockout.

While Fitch isn’t leading with his right, Penn needs keep his hands at mid range so that he can effectively sprawl in the face of a shot for a takedown. He must also use a lot of lateral movement, avoiding putting his back on the cage at all costs, because as good as he is defending the takedown, he isn’t nearly as good defending Greco throws and suplexes. Fitch is a master of both.

Penn could get crazy and decide to substitute a flying knee for the right uppercut. It would be just as effective, if it hit home. Maybe even more so. The problem, however, is that flying knees are just about as risky as high kicks when the goal is to avoid a takedown.

Penn would be better served relying on his hands.

And while I see this as a terribly difficult matchup for the former two-division champion, Penn obviously either disagrees with my assessment or simply doesn’t care.

That is why BJ Penn fights for a living, and that is why I’m tuning into this fight.