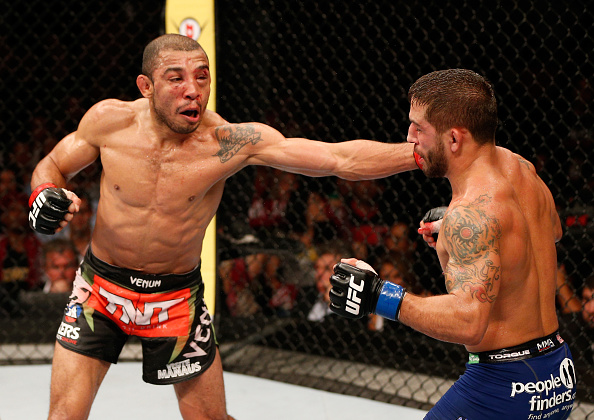 Brazil sleeps well tonight. In the main event of UFC 179 at the Ginásio do Maracanãzinho in Rio de Janeiro, Jose Aldo remained the UFC featherweight champion and the only Brazilian to currently hold a title in the organization, but he got pushed to the limit to get there, as he gutted out a five-round unanimous decision over number one contender Chad Mendes.

The thrilling 25-minute battle was a rematch of a 2012 bout between the two, and while Aldo won both, Saturday’s bout didn’t resemble his first-round knockout of Mendes more than two years ago in the slightest.

“I think I deserved to win,” Aldo said. “He hit me a few times but I hit him a lot more. All I can do is congratulate Chad Mendes. I really respect him and his team and all his family. Inside here it’s a rivalry, but outside we’re friends.”

Scores were 49-46 across the board for the 28-year-old Aldo, now 25-1. The victory marked his 18th consecutive win and his seventh successful title defense.

Mendes pressured Also from the start, throwing hard lg kicks and firing off combinations. Aldo had no problem throwing with Mendes, but a minute in, it was the challenger scoring a flash knockdown with a left hook to the head. After the frantic start, things settled down a bit, but the two continued throwing hard while standing in the pocket mere inches away from each other. While the two exchanged, each fighter took turns landing flush shots, thrilling the fans in attendance. With a minute left, the action was halted momentarily after an eye poke by Mendes, and when waved back together, the two went at each other like 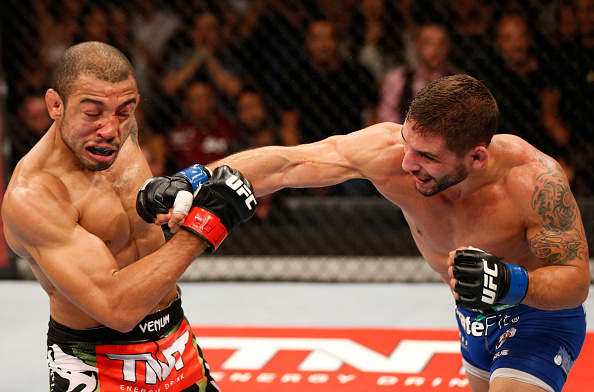 bitter enemies, Mendes scoring a brief takedown and Aldo dropping Mendes with a left hook. Yet just as the horn sounded to end the round, a left-right by Aldo sent Mendes down again. Aldo didn’t get a point deduction from referee Marc Goddard, and Mendes wobbled back to his corner, possibly turning the tide of the fight.

“It rung my bell for sure,” Mendes said. “I was rushing to get my wits back.”

Appearing to have his legs back under him as the second round commenced, Mendes got back to work, but a kick to the groin by the American forced another halt to the bout. After the action resumed, Mendes tried to use more movement as to not be a stationary target for Aldo, who still managed to land with his debilitating leg kicks. Aldo also began digging to the body, while Mendes kept throwing haymakers designed to end the bout. By the time the round ended, it was a tough one to score, and the two fighters appeared to be settling in for a long war.

Another eye poke by Mendes halted the action early in round three, with Goddard giving the Californian a stern warning. Again, the resumption of the action saw both fighters tearing at each other with vicious shots before settling back into a more measured groove. Aldo’s pressure appeared to be wearing on Mendes, but with two minutes left, Mendes rocked Aldo with an uppercut. Mendes went on the attack, and then it was Aldo rocking the challenger, who then looked for a takedown to clear his head. Aldo tossed the attempt aside and fired off ground strikes, but Mendes was later able to lock the champion up against the fence, scoring with a hard left hook before the horn.

Mendes still seemed fresh in the fourth round, and he began walking Aldo down, cutting him over the left eye and landing with several hard shots. In the final two minutes, Aldo began coming back, but Mendes gave enough punches in response to keep the Brazilian from stealing the round though.

With five minutes remaining, Mendes was making the effort to not leave the fight in the judges’ hands, and 45 seconds in, he scored a big takedown that was going to help his efforts on the scorecards if it did go the 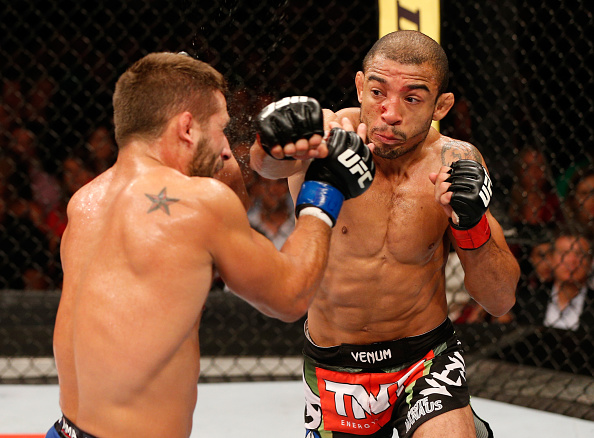 distance. A minute later, Aldo got to his feet and went on the attack, with a hard combination stunning Mendes briefly, The fight strayed to the mat momentarily, the two combatants rising quickly. The striking exchanges continued, both getting jarred, and Aldo throwing off a takedown attempt by Mendes. In the final minute, the weary warriors circled each other for a bit before slugging it out in the last 10 seconds, Aldo pushing the pace before the horn sounded.

“I was just going so hard, I didn’t know what was going on,” the 29-year-old Mendes, now 16-2, said after the bout. “I was just trying to push myself, outstrike him and mix things up, but I’ve got to say the one person who’s lucky that decision didn’t go my way was Conor McGregor.”

McGregor, the brash Irish contender, was Octagonside for the bout, and Aldo made sure he got a jab in at the “Notorious” one as well when asked about his future plans.

“I’ll face anyone they put in front of me,” Aldo said. “I’m here as a champion, and I think the court is complete now. I’m the king, Chad’s the prince, and now we have a joker.”