Gracie, The Spider, The Phenom, Minotauro, Shogun, The Axe Murderer, and more... 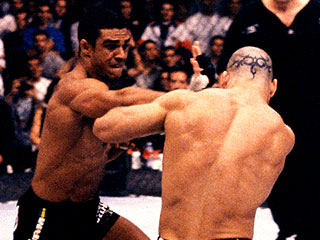 When you think of Brazilian fighters in the UFC, what are the moments that immediately pop into your head? In advance of the organization’s return to Brazil on January 19th, here are a few to jog your memory.

ROYCE GRACIE INTRODUCES JIU-JITSU TO THE WORLD
If you thought Royce Gracie had a chance of winning the first Ultimate Fighting Championship tournament in 1993, you were either A) crazy B) a jiu-jitsu practitioner or C) a member of the Gracie family. For everyone else, the arrival from seemingly out of nowhere of this young man from Rio de Janeiro to win three fights in one night over bigger and stronger opposition wasn’t just a remarkable athletic feat; it started a revolution and a sport. All in four minutes and 59 seconds. See Royce Gracie fights

THE PHENOM
By the time UFC 12 rolled around in 1997, UFC fans had seen some pretty remarkable fights and fighters. But they had never seen anything like Vitor Belfort. Just 19 years old, Rio’s “Phenom” blasted through Tra Telligman and Scott Ferrozzo in a combined two minutes on February 7th of that year to win that night’s tournament, but it was the way he did it that amazed fight fans. With speed, power and extreme confidence, Belfort was MMA’s Mike Tyson. Fast forward more than 15 years, and when you mention his name to fans, that’s still the first picture that pops into view.

THE SPIDER ARRIVES
Anderson Silva was no stranger to diehard fight fans when he signed with the UFC in 2006, but for newer followers of the sport, the lanky middleweight from Curitiba was a mystery, so much so that many believed his debut on June 28th was a pick ‘em fight. Uh uh. Showing off a level of speed, power, and technical striking prowess that was a joy to watch. Silva picked Leben apart with ease, knocking him out in just 49 seconds. If you want to make a statement in your debut, this was the way to do it. Nearly seven years later, he remains without a loss in the Octagon. See Anderson Silva fights

THE DREAM MATCH FINALLY HAPPENS
For years, the idea of a dream match between PRIDE champion Wanderlei Silva and his UFC counterpart Chuck Liddell was just that – a dream. But after years of starts and stops, the two 205-pound legends met at UFC 79 on December 29, 2007, and despite coming four days after Christmas, it was a belated gift for all fight fans. Yes, the two were past their primes, but on this night, it didn’t matter, as each blistering exchange was met with a rousing and deserved roar from the packed house in Las Vegas. Liddell would beat Silva that night via decision, but after having the honor of watching both fighters throw hands with each other, the end result really didn’t matter. See the fight

KARATE IS BACK
Lyoto Machida is unlike any Brazilian fighter in history. He’s not a jiu-jitsu ace like Royce Gracie or Demian Maia, or an unrepentant knockout artist like Wanderlei Silva or “Shogun” Rua. Instead, Machida came to the UFC armed with a unique style of karate taught to him by his father Yoshizo, and for years, no one – including BJ Penn, Tito Ortiz, or Rich Franklin – was able to decipher it. At UFC 98 on May 23, 2009, Machida knocked out Rashad Evans in the second round to win the world light heavyweight title. When his dazzling performance was over, the first thing Machida had to say was “Karate is back.” See Evans vs. Machida

THE ROCK STOPS A TANK
One of the most highly anticipated bouts of the UFC’s first trip to Brazil in 1998 was between popular brawler Tank Abbott and unbeaten local prospect Pedro Rizzo. For the 5-0 Rizzo, it was his first major step up in competition, and he was doing it in front of his home country fans in his UFC debut. For Abbott, it was another night in the office, and an important bout considering he was riding a two fight winning streak. “The Rock” made sure it wasn’t going to be three in a row, as he delivered a crushing knockout at the 8:07 mark. Rizzo would go on to fight in the Octagon 13 more times, becoming one the best UFC fighters to never win a title. Abbott wouldn’t fight in the UFC or anywhere for nearly five years.

MINOTAURO TURNS BACK THE CLOCK
After his 2008 loss to Frank Mir, the consensus was that years of unforgettable wars had finally caught up to former PRIDE / UFC heavyweight champion Antonio Rodrigo “Minotauro” Nogueira. Bringing him to Oregon to face Pacific Northwest favorite Randy Couture in the main event of UFC 102 was just going to be more of the same. But as Nogueira told me afterward, “when they start to talk about me like I was done, ‘ah, Nogueira’s over, blah, blah, blah’, I just went back to show why I’m still in the game. When they talked bad, it gave me motivation.” Did it ever. So for three rounds in August of 2009, two of the greats put on a spectacular fight that was one of the best in UFC history. Nogueira won via decision that night, and if you’re a boxing fan coming over to MMA, think of this fight as MMA’s “Thrilla in Manila.”

BUSTAMANTE’S DOUBLE TAP
A jiu-jitsu master of the highest order, newly crowned UFC middleweight champion Murilo Bustamante was likely to get his ground game tested by Olympic wrestler Matt Lindland in his first title defense on May 10, 2002. Late in the first round though, it was Bustamante scoring the takedown and seemingly ending the fight with an armbar. Notice the word “seemingly.” Lindland protested and referee John McCarthy decided to restart the action. Stunned by this turn of events, Bustamante was still able to clear his head, and in the third round he finished the fight for good via guillotine choke.

GONZAGA CRO COPS CRO COP
As a rising heavyweight star, Gabriel Gonzaga had many fight fans believing that if he was able to implement his ground game on former PRIDE superstar Mirko Cro Cop at UFC 70 in 2007 that he had a good shot of winning. Standing with the Croatian knockout artist? That was another story entirely, so when the two fighters were stood up late in the first round after a dominant ground and pound attack from “Napao,” most figured it was now time for Cro Cop to unleash a fight ending kick to the head. Well, a fight ending kick to the head was unleashed, but it was by Gonzaga, who knocked Cro Cop out cold in a stunning turn of events that will live on in highlight reels forever. See the fight See the highlights

RUAS CHOPS DOWN VARELANS
Not only was Marco Ruas owner of one of the coolest nicknames ever, but “The King of the Streets” was a calm, cool, and collected bad ass in the early days of the UFC. This notion was turned into fact in his first night as a UFC fighter, as defeated three opponents to win the UFC 7 tournament in September of 1995. The final win of the three was the biggest – literally – as the 6-foot-1 Ruas took on 6-8, 300 pounder Paul “The Polar Bear” Varelans. On paper it was a mismatch; in reality, Ruas sent the first salvo to those who believe leg kicks don’t win fights, as he battered Varelans with shot after shot to the leg until the giant finally fell at the 13:17 mark.

SHOGUN’S TIME COMES
After a stellar career in the PRIDE organization in Japan, Mauricio “Shogun” Rua hit hard times when he came to the UFC, thanks to a debut loss to Forrest Griffin and a series of devastating knee injuries that kept him from showing more than glimpses of his prodigious talent. That all changed on May 8, 2010, when he finally made it back to the top of the MMA mountain, knocking out countryman Lyoto Machida in their UFC 113 rematch. It was the feel good story of the year, and a crowning achievement for the Muay Thai machine from Curitiba. See the fight

ALDO BRINGS STATE OF THE ART FEATHERWEIGHT MMA TO THE UFC
Sure, the fighters from the featherweight division of the WEC started making their way to the Octagon in late 2010, but for all intents and purposes, the man everyone was waiting to see didn’t arrive until April of this year. But when he did, UFC featherweight boss Jose Aldo showed the world what high-level 145 pound prizefighting looked like in a thrilling five rounder with Mark Hominick at UFC 129. If you’re a fight fan, you know how exciting the division is – and who better to lead them but Aldo, whose UFC 142 win over Chad Mendes in early 2012 provided another memorable moment when the champ ran out of the Octagon and into the crowd to celebrate with his home country fans as soon as the bout ended.

SILVA’S CHAMPIONSHIP HEART
The drama before this UFC 117 bout took place couldn’t hold a candle to what happened on fight night, as Anderson Silva and Chael Sonnen engaged in a championship fight for the ages. Yes, Sonnen dominated the majority of the bout with his ground and pound attack, but each moment before he would take the previously untouchable title holder to the mat was filled with tension as Silva unleashed the strikes many believed would end the fight. But even though he got rocked on a few occasions, Sonnen was resolute in his attack, and as the seconds ticked by, he was getting closer and closer to one of the sport’s great upsets and the realization of a dream. Then, like the truest of true champions, Silva pulled off a fifth round submission. Calling it a spectacular comeback simply doesn’t do it justice. See the fight

INTRODUCING “CIGANO”
Already established as one of the best heavyweights in the game, former heavyweight champion Junior dos Santos will always have the following trivia question associated with him: “Who did dos Santos beat in his UFC debut?” But the victory of “Cigano” back at UFC 90 wasn’t trivial at all; in fact, it sent shockwaves through the MMA world when the unknown prospect starched top contender Fabricio Werdum in 81 seconds in their 2008 bout. It wasn’t a fluke though, as his current Octagon record stands at 9-1. See the fight