Brazil vs Hawaii - A new rivalry in MMA?

UFC featherweight champion Max Holloway faces Jose Aldo for the second time Saturday at UFC 218, only six months after he beat the Brazilian at UFC 212. Yancy Medeiros, who also fought in Rio de Janeiro on the same card when he beat Erick Silva, is scheduled to fight Alex Oliveira this weekend.

Do you see a pattern? For the second time, two Brazilians are meeting two Hawaiians in a short span. Are we seeing the emergence of a new rivalry in the sport?

“I don’t know. But if this rivalry is arising, brother, the Hawaiians are in for big trouble ahead,” said the Brazilian ‘Cowboy.’ “I’m rooting for Aldo a lot. He’s a simple guy, he’s nice, and he said he misses being the champion.” 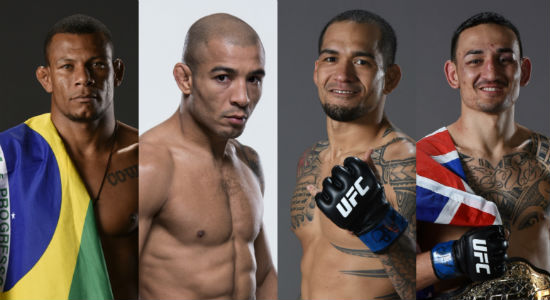 “Even in surfing there is this battle between Brazilians and Hawaiians, so it’s nice,” said Holloway, “We can even sell a rivalry between Brazil and Hawaii because we’re always competing, but afterwards there’s only respect. We have similar cultures, so it’s nice to see. I think it’s fun.”

For Medeiros, who’s fighting his third Brazilian foe in the UFC, it’s just a coincidence, as athletes from both the South American country and the U.S. state are among the best.
ORDER UFC 218 DIGITALLY AND WATCH ANYWHERE ON ANY DEVICE

“I’m fighting another Brazilian, but I don’t have any kind of rivalry with anyone. At the end of the day, we are martial artists. I think it’s a coincidence; I was given good competitors.”

When you think about Hawaii in martial arts, it’s impossible not to think of BJ Penn. “The Prodigy” went to Rio de Janeiro in 2000 to become the first non-Brazilian BJJ world champion as a black belt. In a certain way, Holloway did the same as he dethroned Aldo in Rio, but the former champ assures the Hawaiians that this momentum is coming to an end.

“They had the opportunity to fight in Rio and came out with wins,” said Aldo. “But I was even talking to Cowboy that we’re beating these Hawaiians now so they won’t get in our way anymore.”