Albuquerque welterweight Tim Means appeared to do enough to take a close win over Sergio Moraes in UFC Fight Night action at Arena Guilherme Paraense on Saturday, but the judges disagreed, awarding Moraes a split decision victory that made it 5-0 for Brazil on the prelim portion of the card.

Moraes’ unorthodox style paid off well in the opening round, as his wild punches scored throughout the first frame. Means got off his share of more conventional shots, and he added to that total in the second round as he began to even the score with the Curitiba product.

It was in the third that Means appeared to take over, as he kept a fast and busy pace while Moraes tired. “The Panther” did score with his wild shots, apparently doing enough to get the nod on the scorecards.

A wild scramble to start the bout ended up with Patrick (15-1) in charge of the action on the mat, and while Hadzovic (11-4) found his way back to his feet, the Brazilian remained locked on to his foe, dragging back to the mat twice more. Midway through the two broke apart, but Patrick scored another takedown. Hadzovic responded with an armbar attempt that Patrick pulled free from, and it was the Rio product who took over with solid ground work and strikes.

Patrick was even more dominant in the second, as he took Hadzovic’s back and kept in that dominant position for most of the frame. Hadzovic was game, but he was now two rounds in the hole heading into the final stanza, and Patrick made sure there would be no miracle comeback, as he again kept the fight on the mat in the third, wrapping up the win by scores of 30-25 and 30-27 twice. 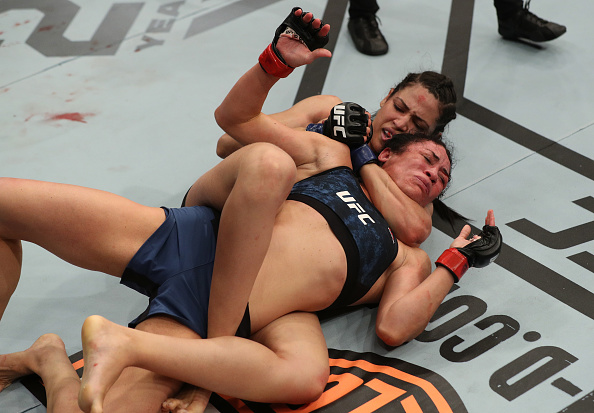 Octagon newcomer Polyana Viana had the crowd in her home state of Para roaring, as she submitted fellow debutant Maia Stevenson in the first round of their strawweight bout.

Stevenson’s striking looked sharp as the fight opened, but as far as Viana threw the former Ultimate Fighter competitor to the mat, it was the Brazilian’s world, and she transitioned from an armbar to a guillotine to the rear naked choke that ultimately forced Stevenson to tap out at 3:50 of round one.

Alcantara went after Soto’s body with kicks from the start, and while it wasn’t immediately evident, one front kick hurt the Californian and “Marajo” saw it immediately. Following up with more kicks and elbows, Alcantara put Soto on the deck with a left hand, and after a barrage of blows, referee Osiris Maia stopped the match. The official time was 1:06 of round one.

In a meeting of unbeaten flyweights, it was the home state favorite getting the night off to a good start for Brazil, as No. 14-ranked Deiveson Figueiredo stopped Joseph Morales in the second round.

Figueiredo had a big first round, and after scoring a takedown 30 seconds in, he fired off ground strikes and kept his foe on the mat until the two were put back on the feet with a little under a minute left. Seconds later, Figueiredo rocked Morales with a left hand and nearly pulled off a guillotine choke in the closing stages of the frame.

The Brazilian continued to impress in round two, and then he took everything to a new level suddenly, as a left hook dropped Morales and put him in immediate trouble. A series of follow-up shots then ended matters, with referee Eduardo Herdy stepping in at 4:34 of round two.

With the win, Soure’s Figueiredo improves to 14-0. Sacramento’s Morales falls to 9-1.