Brasilia rewind: What you got right & wrong

Through her first two fights in the UFC, Cris "Cyborg" Justino has maintained her reputation as the top pound-for-pound women's fighter on the planet after decimating newcomer Lina Lansberg in the main event from Brazil on Saturday night.

Cyborg came into the fight as a heavy favorite, but Lansberg talked all week long about her desire to give the Brazilian a serious challenge for the first time in her most recent bouts. 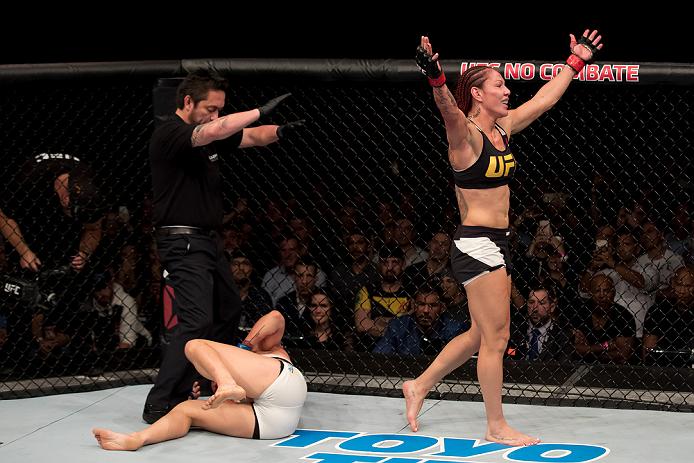 While Lansberg did find a way to survive until the second round - a feat not accomplished by any of Cyborg's foes since 2013 - she didn't make it much longer after the Brazilian put on a punishing performance on the feet, and then on the ground, to get the win.

Cyborg is now 2-0 in the UFC and she hasn't lost a fight since her professional debut 11 years ago.

Fantasy players bet big on Cyborg as well, with an overwhelming 94 percent picking her to win with another 94 percent saying that she would win by knockout. Cyborg was the biggest favorite on the entire card and she came through as expected while handing Lansberg the second loss of her career.

The co-main event actually saw another massive favorite get a victory as former bantamweight champion Renan Barao bounced back from a two-fight losing streak when he defeated Phillipe Nover to get his first win as a featherweight.

Barao used a potent striking attack on the feet to keep Nover guessing for three straight rounds as the Brazilian celebrated the much-needed victory. 94 percent of fantasy players had Barao winning, although only 41 percent picked him by decision.

While it's never easy to predict how a heavyweight fight might end, Roy Nelson came through for 84 percent of the fantasy players who picked him to beat Antonio "Bigfoot" Silva on Saturday night.

The heavy-handed former Ultimate Fighter winner dropped Silva with a massive uppercut in the second round before getting the TKO finish a few seconds later. Nelson was not only a popular pick to win amongst fantasy players, but 87 percent also believed he would get the job done by knockout and that's exactly what he did.

Godofredo Pepey kicked off the main card with a spectacular finish over Mike De La Torre, and just like the three previous fighters, he enjoyed a heavy advantage according to fantasy players. Pepey was picked by 81 percent of players going into Saturday night, and he didn't disappoint, as he scored another highlight reel victory.

While a number of favorites did get wins, there were also a couple of sizable upsets that took place as well. 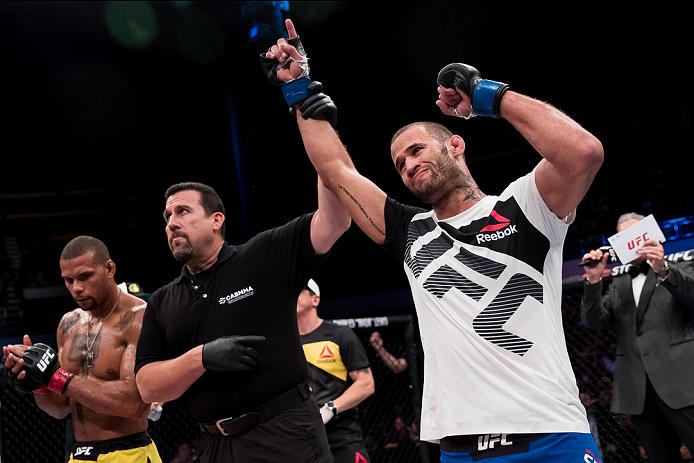 The biggest saw Eric Spicely pull off a first round submission win over Thiago Santos after only 10 percent of players picked him to get the job done. Meanwhile, despite a six-fight win streak going into the night, Francisco Trinaldo was only selected by 39 percent of players in his bout with Paul Felder.

Trinaldo ended up defeating Felder after opening a nasty cut over his eye that forced the referee to call the fight in the third round.

As for the prelims, another trio of fantasy player favorites got victories on Saturday night.

Erick Silva was selected by 76 percent of players, but he ended up in a Fight of the Night battle with Luan Chagas. It was a back and forth affair, but Silva still got the win for himself and for a lot fantasy players as well.

The biggest upset on the prelims actually came in the featured bout, where Michel Prazeres handed Gilbert Burns a lopsided defeat after only 17 percent of players picked him to win. The powerful lightweight proved to be too much for Burns over three rounds, and he was a big boost for the players who not only picked him to win, but for another 64 percent who said he would come away with a decision victory.

At the end of the night, nine favorites - according to fantasy players - came away victorious, with only four upsets out of the 13-fight card.