Brandon Vera - One More Round

"Shogun is a guy that I know for a fact, if I don’t come prepared and ready, I could get hurt." - Brandon Vera 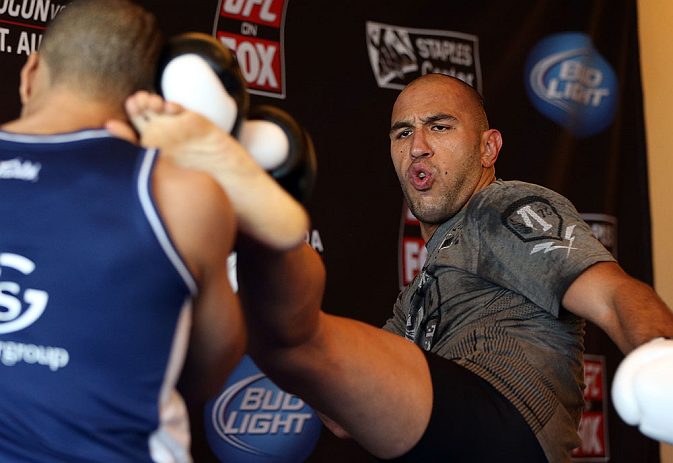 Brandon Vera’s first impression of the man he’s fighting this Saturday in Los Angeles, Mauricio “Shogun” Rua, may not have been the most positive one. Scratch that. To any other fighter, that first impression would have been one to cause you to walk – or run – away.

“I remember Shogun in PRIDE holding people’s head down on the mat and soccer kicking them in the face two or three times in the face before the fight was over,” he recalled. “I said ‘damn dude, that guy’s a monster, I can’t wait to fight that guy. I hope I get a chance one day.’ I do remember that.”

It takes a particular kind of person to become a professional prizefighter, and Vera just proved it with that statement, but what you have to understand about “The Truth,” is that not only will a win over Rua skyrocket him up the light heavyweight rankings, but if he does it impressively enough, he might just earn a title shot. And furthermore, the last time Vera fought someone he considered a hero – Frank Mir – he blasted him out in 69 seconds.

So if the 34-year old San Diegan feels like all the stars are aligned in what has been a rollercoaster UFC career, he might just be on to something. Remember, Vera was supposed to face James Te Huna last month before being called on to headline this weekend’s UFC on FOX show at STAPLES Center against Rua, a shocking turn of events to say the least.

“Of course it surprised me,” he said. “I wasn’t very proud of my last showing (a decision win over Eliot Marshall) and when I got the phone call it was like a Godsend. I don’t know if you believe in God, karma, Allah, Buddha, or what, it felt right when I got the call and I got goosebumps everywhere and all I could say was ‘yes, yes, yes.’ I was just so excited.”

You can hear that excitement over the phone line, and when you look at what Vera has been through, getting the MMA equivalent of a lottery ticket is almost like getting a bucket load of money as soon as you’re getting evicted from your apartment for non-payment. And as recent as January of 2011, Vera was getting evicted – not from his home, but from the UFC after a loss to Thiago Silva. But when it was discovered that Silva failed his post-fight drug test, Vera was brought back into the fold, only to struggle in his win over Marshall last October. To his credit though, Vera never pointed fingers at anyone but himself for the low points in his career. And it may be that honesty that allowed him to rise back up, take this fight, and put in an intense camp that has him ready for battle, both physically and mentally.

“It (honesty) keeps me grounded so much,” he said. “It makes me realize what my shortcomings are, what I need to work on, and what I need to be thinking and focusing on. Everybody has an ego; mine has been in the way of my career for so long, and now I’m learning and listening and watching again and I’ve totally taken my ego out of the picture again and it’s helped me by leaps and bounds as a fighter to grow even now. People call me a veteran of the sport, but I still feel like a little kid learning every day, so it’s helping a lot I guess.”

What’s also aiding Vera in his quest to shock the world and silence the critics this weekend is the man who will stand across from him on fight night – the former PRIDE star and former UFC light heavyweight champion who still garners a healthy respect from all his opponents, and for good reason.

“Shogun is a guy that I know for a fact, if I don’t come prepared and ready, I could get hurt,” said Vera. “So for me, it’s a super huge deal that I’m ready, that I’m in shape, and that I’m ready to bring it to Shogun. It’s refocused me, rededicated me, and it sounds real cliché, but every time I fought one of my heroes, you’ve seen the best Brandon Vera. So I’m excited to get in there with Shogun and mix it up.”

But is Vera facing the same Rua he watched competing in Japan or wrecking the likes of Chuck Liddell and Lyoto Machida here in the States? Some wonder after the punishing five round war he had with Dan Henderson last November. Sometimes fights like that can take a toll that will show up in an athlete’s next bout. Vera’s not buying it.

“That’s what a lot of people think, but I tell everybody that you don’t ever want to fight Shogun when he’s coming off a loss, just because he’s always shown up ten times better after his loss,” he said. “That fight (with Henderson, which Rua lost via close decision) was one of the best fights of all-time. That goes down in history and will be remembered forever. And I believe Shogun is gonna bring that same form and same attitude to the cage that night, and that’s what we’re preparing for, for that type of Shogun.”

Yet what he’s not doing is expecting a standup war with the Brazilian bomber. Not exclusively at least.

“Shogun schooled me,” said Vera. “He taught me something during an interview. I was up there in LA at the UFC Gym in Torrance, and we’re doing an interview together. The reporter was saying ‘man, you guys are two great standup fighters, it’s gonna be a straight Muay Thai war,’ and I’m like ‘hell yes, I can’t wait to stand with Shogun. For lack of a better term, it’s one master against another master in their art, and to be able to stand there and trade with Shogun and show off Muay Thai to the world would be a blessing.’ But right when he gives the mic to Shogun, he says ‘I’ve got good standup, Brandon’s got good standup, but you have to remember that this is an MMA fight and I’m an MMA fighter.’ Right then and there, Shogun schooled me and said something I was not thinking about until it came out of his mouth. So I’m prepared for sure to take this all over the place. From the ground to the clinch, to the ground to the transition period, to the submissions, to being on top and bottom, everything. I’m prepared for this fight to go everywhere, and Shogun was the one who opened my eyes to that.”

Rua is also a fighter Vera considers a hero, and one that can be his ticket to a world title shot should he beat him. It’s a weird paradox, but one that’s been seen countless times in the fight game. Sometimes you have to beat your heroes to move forward, and if that’s what it takes for Brandon Vera to reach the potential the world has seen in him since his UFC debut in 2005, so be it. And wouldn’t that be some story?

“I’ve been looking at this and I’ve talked to my family and talked to my manager and my teammates, and it would become a beautiful Hollywood story for sure,” he said quietly. “I beat Shogun on Saturday the way I want to beat him, it would be so much sweeter than if I was to just ride the high road the whole time. I’ve been down in the darkness, I’ve been down where people didn’t want to talk to me no more and people turned their back on me. I’ve been through it all. And to be able to come back and do this, it would be such a beautiful thing.”

A pause. Then he continues.

“I wouldn’t change it for any other way. It’s made me the person and the man that I am right now, and everybody has woulda, coulda, shouldas, and I don’t have those – not yet, because I’m still fighting and we’re still gonna make this happen.”