Brandon Vera: Back to Where it All Began 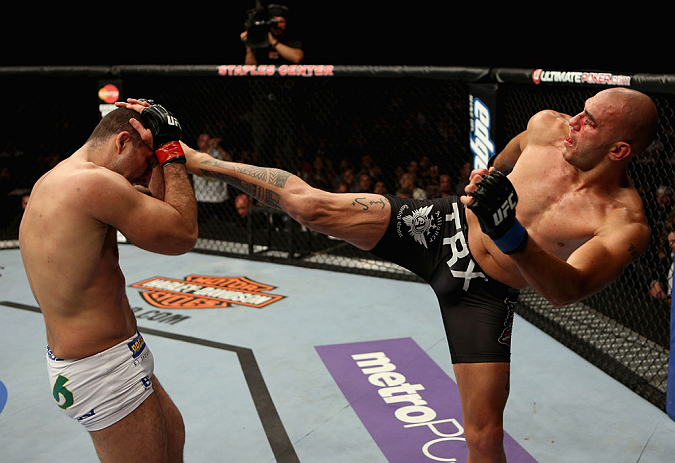 It was the momentum killer of all momentum killers, but after a career-resurrecting fight against Mauricio “Shogun” Rua in August of 2012, Brandon Vera had a yearlong layoff, yet didn’t fall into a funk. He used it to reinvent himself.

“I started eating correctly, started staying away from high fructose corn syrup and all the processed foods, and started going more organic,” said Vera of his transformation back to the division he competed in from 2002 to 2008. “I started finding out about food, I was having grass-fed beef and staying away from all the hormones and stuff that they put in beef, and my body started changing. I started lifting, I ended up with a strength and conditioning coach full-time, not just for camp; I ended up with a yoga coach and a lot of new coaches on top of my other coaches, and I kept growing and growing. And I was like ‘I don’t like cutting to 205. I don’t like cutting weight.’ (Laughs) Camp used to start out pretty good when I was about 230, 240, and then when I had to start cutting weight I started feeling weaker and weaker and camp just seemed to get harder and harder as it went on.”

Eventually, he spoke to his manager Matt Stansell and asked him to reach out to UFC management about a move back to heavyweight. They agreed. Brandon Vera was back with the big boys, and he couldn’t be happier, not just because he can eat again, but because he doesn’t have to deal with the torture weight cutting can put your brain through.

“For me, the mental part of the game was a huge piece, and having to cut weight and having to stress out about that for the last three, maybe four weeks just sucked,” he said. “Every time I went out and every time I ate I had to make sure of what I was eating and had to weigh what I was eating. I’m not that guy. It took me so long to get to doing that, and when I had to start doing that regularly, it sucked bad. I was just over it.”

It’s the latest reinvention of the 35-year-old Vera, who many believe was at his best as a heavyweight, and the numbers prove it. Just 4-4 with 1 NC as a 205er, Vera was 8-2 in the heavyweight division, and while the level of competition was higher for him at light heavyweight over the years, there’s no denying that he was more dynamic and more of a finisher when he had the extra pounds on. Just ask Frank Mir, who Vera demolished in 69 seconds in 2006. You could even make a ‘what if’ case for him being unbeaten in his time with the big boys, as his 2007 loss to former heavyweight champion Tim Sylvia came after a nearly yearlong layoff due to managerial issues, and his 2008 defeat to Fabricio Werdum saw him be the recipient of what many believe was a quick stoppage.

Five years later though, none of that really matters.

“I only look back at those ‘what if’ conversations when I need motivation to keep my ass moving forward,” he chuckles. “That’s the only time I look back. It’s a brand new chapter, and I know a lot of guys say that, but it’s just different. Since I started fighting in the UFC I’ve never just continued to train. I never had the fire in me, and I think a lot of it stems from Shogun knocking it back into me and me finding out a lot about myself.”

In the Rua fight, Vera didn’t win, but he showed why everyone was so excited about his potential for all those years. “The Truth” left it all in the Octagon that night, drawing praise from all corners for his effort. A quick turnaround would have kept the momentum going, but injuries to his back, hand, and ribs put him on the shelf. In between though, he stayed in the Alliance MMA gym in San Diego.

“I did not stop training after that Shogun fight,” he said. “I maybe took one month off for my lower back, and after that I just got back in there to train. The only time I took anytime off is if I had an injury. If I hurt my rib or broke my hand or anything like that, I would take off, but I would only take off to get it casted, and I kept training.”

On Saturday, Vera finally returns against veteran Ben Rothwell, who the San Diegan describes as “a Midwest country boy who’s strong and likes to test his chin every fight.”

And Vera would love to be the next to test it, with a spectacular knockout win likely to make him an instant player in the division he left five years ago. But he claims that wasn’t the reason for his move.

“I never really thought that. I just thought I was tired of cutting weight.”

He laughs, but despite his affable nature, he’s got to know that at 35, he needs to make a move if he’s ever going to reach the championship circle.

“Some people could say he’s 35 and it’s hard on his body to cut weight and doesn’t like to cut weight anymore,” he said, “but I’m taking it as I’m 35 and I should have told the UFC a long time ago that I’m over being at 205. But I’m hard-headed, man. You can’t tell me anything, and I am that guy. I’m sad that it took this long, but I’m not surprised. It’s me.”

Better late than never though, right?