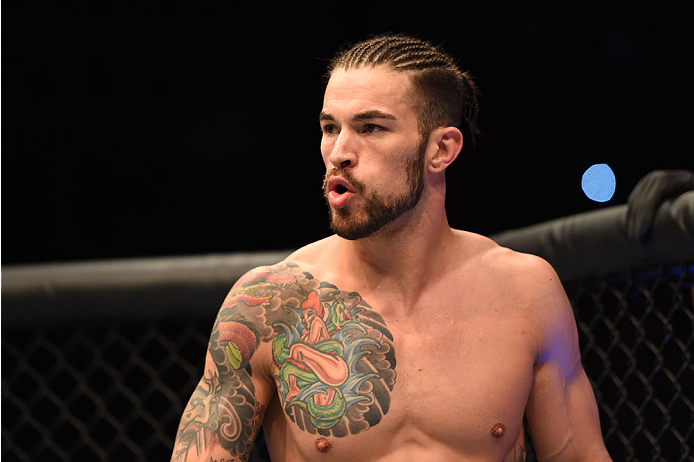 If one had to explain what UFC welterweight Brandon Thatch’s nickname meant, the best place to start is the 11 pro wins that are all first-round finishes including back-to-back striking stoppages in his first two Octagon appearances. That right there sounds like a Rukus to me.

Beyond his crushing Knockout of the Night of Justin Edwards in his UFC debut or his follow-up knee to Paulo Thiago’s body that forced the Brazilian to tap, Colorado’s non-stop kicking and punching machine returned to the Octagon from after a year on the shelf to tangle in a main event against former UFC champion Benson Henderson. The end result was a Fight of the Night and, possibly, Fight of the Year, which is exactly the type of performance Thatch guarantees he will bring each and every time he’s inside the Octagon.

“I definitely push the pace,” Thatch said. “I’m not one to sit back and wait for you to come to me. I’ll meet you in the middle or I’ll come to you. It’s a high pressure style, but I’m still calculated in my attacks. I don’t throw big, looping punches. I stay clean with my striking. It’s something that is hard to deal with. I’m more worried about putting on a show for the fans than getting that W. I want that W, but usually when you put on a good show and you push the pace, the outcome handles itself. That’s what I’m worried about. In that fight against Benson, ultimately, I lost, but I’ve been told it is one of the best fights of this year and that’s a win in and of itself. I want people to remember me.”

The 29-year-old with an 11-2 pro record has an enthusiasm for the sport that is simply infectious. “When I walked out, I felt like a rockstar,” Thatch said of his return to action in February. Following by far the longest layoff of his young career, he soaked in every drop of the feelings from walking into a headlining bout in the UFC in front of his family and friends in his hometown. It was an experience that almost didn’t happen because Thatch’s original opponent, striking specialist Stephen Thompson, withdrew just about two weeks out and, luckily, the top-ranked Henderson was interested in the short notice bout.

“Honestly, I was just thankful to have a fight still,” Thatch said. “I was just thankful to still be able to fight, especially in my hometown in Colorado. The caliber of athlete I was fighting was awesome. For the UFC to look at me and say that I can handle that sort of fight was really cool. I was just excited. Benson’s a stud. You get into this game as a martial artist to test yourself. I want to personally see how far and where I stand in this sport. Fighting lower ranked guys is not something I want to do. You want to see where you’re at and where you stand. That fight gave me a look at where I stand and where I need to improve. The overall challenge of it was awesome.”

The bout itself was back and forth for the first 15 minutes, but Henderson took over in the championship rounds and, eventually, finished things with a rear naked choke 3:58 into the fourth round. It was a learning experience in every way possible, as Rukus not only got to scrap with a highly-regarded and motivated former UFC champ, but Thatch had only ever seen a second round once before in his career and in this tilt he saw a fourth round. The biggest food for thought to come from the Henderson loss is that Thatch knows he needs to stick to his game and not focus on his opponent’s talents as much.

“I feel like I was thinking too much about ‘where is he dangerous’ instead of pulling the trigger and fighting my fight,” Thatch said. “I didn’t try any dirty boxing or try to wrestle against the cage. Those are things I’m good at. In the first and second round, when we go against the cage, I would back out because I was told he likes to shoot when his back is against the cage. I would have him hurt and then I would back out because I wasn’t fighting my fight. Woulda shoulda couldas don’t really matter now, but it was good to be able to go that long with a former champ. I think in this upcoming fight, I’m going to go back to the old school, where I’m fighting off of reflexes and my reactions.”

Up next, Rukus will battle on his birthday at UFC 189 in Las Vegas against Iceland’s submission magician Gunnar Nelson. Currently ranked #15 in the welterweight division, Nelson was originally set to take on John Hathaway and Thatch was meeting Muay Thai striker John Howard. With Hathaway’s withdrawal due to injury, the Coloradan will now clash with the 13-1-1 Nelson, who has a penchant for dropping fighters with sniper-like strikes and then using his BJJ black belt to choke them out.

“Anybody in the UFC deserves to be there and they’re dangerous,” Thatch said. “I have to watch out for where he’s dangerous, but I have to fight my fight. I’m not too worried on what he’s going to do, I’m focused on what I’m going to do. Ultimately, I think this one is my fight. I’m too long. I’m too fast. Coming off what my fights look like, if he’s smart, he’ll try to take me down.”

In preparation for Nelson, Thatch is busy training with Team Elevation under head coach Leister Bowling, BJJ coach Eliot Marshall and, maybe most of all, striking coach Christian Allen. “He makes violence look pretty,” Thatch said of the man in charge of sharpening his beloved striking skills. “He’s got a black belt in jiu-jitsu, black belt in judo and he is one of the nastiest strikers out of Colorado. He’s a straight-up ninja in every aspect. He’s a good dude and I’m blessed to have him in my corner and I’m blessed to have him as a friend.”

This Saturday in Las Vegas, welterweights will war as Thatch collides with Nelson.

“I’m there to fight, I’m there to finish, I’m there to be exciting,” Thatch said. “I think that’s why I’m slowly and steadily becoming a fan favorite. My fans are loyal and I think the reason they are loyal is because I am exciting. The Rukus is going to show up and bang.”