Brandon Moreno went from a three fight UFC winning streak to out of the promotion, but now he's back and ready to leave his mark.
By Thomas Gerbasi, on Twitter: @TGerbasi • Sep. 18, 2019

The world belonged to “The Assassin Baby.”

Over the space of six months in 2016-17, Brandon Moreno scored three UFC wins over Louis Smolka, Ryan Benoit and Dustin Ortiz, and just like that, the flyweight from Tijuana was on track to possibly become Mexico’s first UFC champion.

Yet by the end of 2018, following back to back losses to Sergio Pettis and Alexandre Pantoja, Moreno was out of the UFC and facing an uncertain future.

“It was bittersweet,” said Moreno of his first UFC stint. “I did well at times, but the exit was very hard. It's never easy to lose your livelihood. But I believe I've matured a lot since my first run in the UFC, through the good and the bad. My hunger has become even stronger in my time away from the UFC, and I'm so happy to be back.” 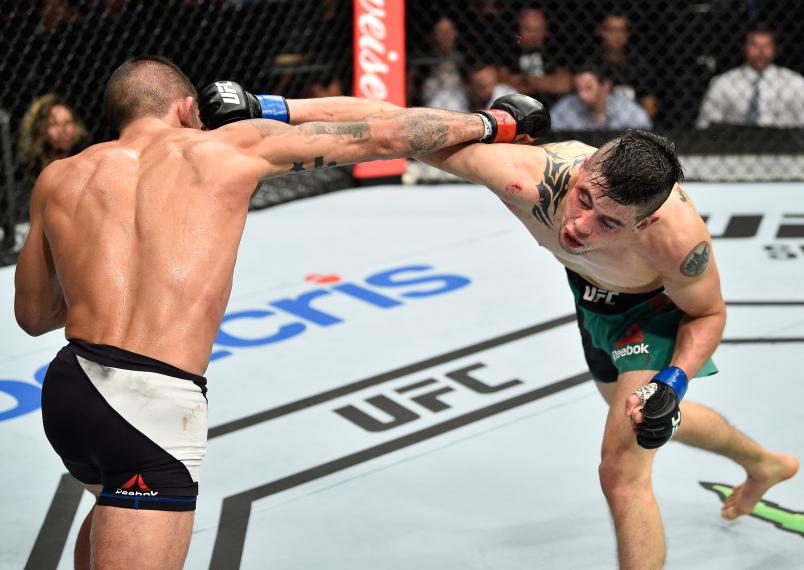 On Saturday, fresh from a June stoppage of Maikel Perez that earned him the LFA flyweight title, Moreno makes his UFC return against unbeaten Askar Askarov. It may only be 16 months since his last visit to the Octagon, but that’s likely felt like an eternity for him.

“I missed the feeling of stepping into the famed Octagon and all the people you get to perform in front of,” he said. “I missed the glory that comes with being a UFC fighter. Above all, I missed the extremely high level of competition that you find in the UFC.”

And while Askarov is just making his UFC debut, he is of the high level Moreno speaks of, and the Mexican battler knows it.

“He's an incredible fighter,” said Moreno. “He's undefeated against good competition and he's got good jiu-jitsu and solid striking. But with all due respect to my opponent, he doesn't present any challenges I haven't seen before. Everyone in the UFC is excellent; that's what excites me so much about this fight and being back.”

Moreno’s return does come at a perfect time, as the flyweight division is undergoing a resurgence since it was confirmed that the weight class ruled by Henry Cejudo will be sticking around. But even if that wasn’t the case, Moreno was ready to compete anywhere the promotion wanted him to.

“Honestly, I was planning on returning to the UFC regardless of the division,” he said. “This is where I've always wanted to be, even if I had to fight out of my class a bit. I simply wanted to return to the UFC, and I'm very happy to come back at 125 pounds. This is the best-case scenario for me.”

As for the division, Moreno says, “I think the division is more alive than ever. There have been great fights lately, there are a ton more scheduled for the next few months, and I believe I fit right in the thick of it. I've got a tough fight ahead of me, and I want to fight the best of the best.”

He will get his chance, starting this weekend, in a fight with even more weight attached to it because it’s in his home country of Mexico. More specifically, it’s in Mexico City, the site of his first UFC loss to Pettis in 2017.

“I have a great feeling of revenge, to be totally honest,” Moreno said. “I feel it's a second chance for me. It's interesting. It's the same hotel, the same procedures, and even the same people are working in the hotel. I feel like life is giving me a second chance to get the win, and I'm excited to embrace that opportunity this weekend. It's my time.”

The ear to ear smile is still there, and at 25, Moreno may not even be in his prime, which means the idea of him becoming Mexico’s first UFC champion is still alive and well. So call it a dream delayed, not deferred.

“Mexico loves combat sports, and the country would go crazy with a 100-percent Mexican champion,” he said. “There are others, like Yair Rodriguez, Alexa Grasso and Irene Aldana who are high in the rankings, and I will do absolutely everything I can do win my title as soon as possible. I will die in the Octagon to achieve my goals.”