Brandon Moreno Took The Long Road To The Title

From The Ultimate Fighter To Out Of The UFC To The Flyweight Champion, Brandon Moreno's Journey Made Him A Champion
By E. Spencer Kyte, on Twitter @spencerkyte • Dec. 28, 2021

“Tijuana — you have a champion!” Jon Anik boomed as referee Mike Beltran stepped in to separate Brandon Moreno and Deiveson Figueiredo seconds after the latter tapped out to a rear-naked choke, making the former the new UFC flyweight champion.

The crowd inside Gila River Arena in Glendale, Arizona was in full throat, and when Moreno first stood up, soaking in the ovation and the magnitude of the moment, there was a look of disbelief on his face, as if he were asking himself, “Did that really just happen?”

Seconds later, he fell to his knees in the center of the Octagon, tears streaming down his face — a new champion overcome with emotion; a man that traveled a long, difficult road having finally reached his destination.

Moreno was one of 16 regional flyweight titleholders selected to compete on Season 24 of The Ultimate Fighter, arriving as a 22-year-old with an 11-3 record, but limited experience compared to many of his more seasoned fellow cast members. He was pitted against top-seeded Brazilian Alexandre Pantoja in the Round of 16 and was submitted in the second round; his competition over not long after it began.

But when Sergio Pettis was forced out of his bout with Louis Smolka a little more than a week before their meeting on October 1, 2016, the UFC reached out to Moreno to fill his spot and make his promotional debut, even though his season of the long-running reality TV competition was still airing.

He made the absolute most of it, catching the Hawaiian in a guillotine choke prior to the midway point of the opening round. 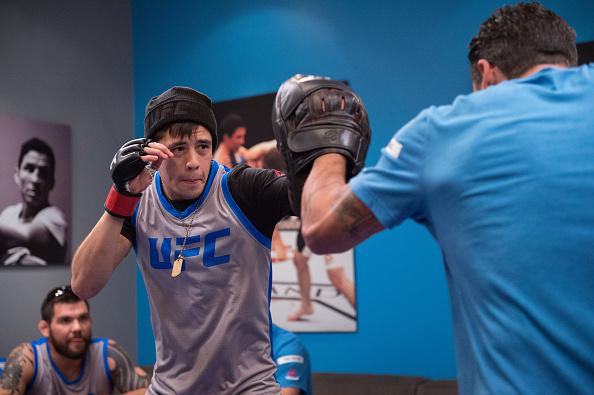 He made his second appearance in the Octagon at the Ultimate Fighter: Tournament of Champions Finale, securing a split decision victory over Ryan Benoit. Only two other cast members from that season competed that evening, with tournament winner Tim Elliott falling in his championship clash with Demetrious Johnson, and Matt Schnell suffering a first-round stoppage loss to Rob Font in a bantamweight battle.

The 16th seed was the first of the group to get a win in the UFC following their time on the show, and the only one to earn a victory at the finale. It was almost like the universe was trying to tell us something.

A little more than four months later, Moreno secured a third consecutive UFC victory, submitting veteran Dustin Ortiz in the second round to move his record to 14-3 and firmly establish himself as one of the top emerging talents in the 125-pound weight class. Standing in the cage, speaking with Brian Stann following the win, Moreno took a moment to tell us something about himself.

“Maybe not today, maybe not tomorrow, and maybe not the next month, pero, only one thing is true: I will be champion one day, I promise. I promise.” 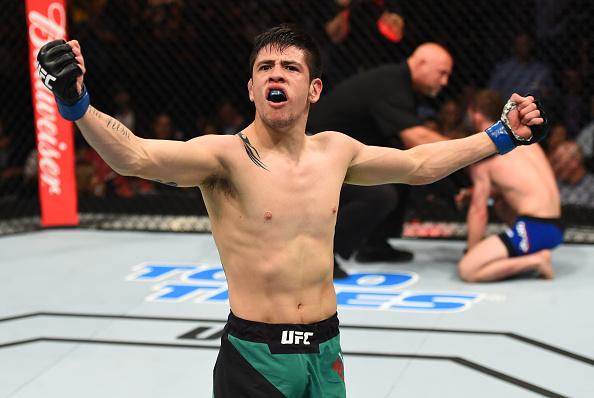 NASHVILLE, TN - APRIL 22: Brandon Moreno of Mexico celebrates after his submission victory over Dustin Ortiz in their flyweight bout during the UFC Fight Night event at Bridgestone Arena on April 22, 2017 in Nashville, Tennessee. (Photo by Jeff Bottari/Zuffa LLC/Zuffa LLC via Getty Images)

Four months later, Moreno headlined an event in Mexico City, paired off with Pettis, the man he replaced in order to make his UFC debut.

Carefree, loose, and playful to start the fight, Moreno took Pettis’ back less than two minutes into the contest and started hunting for a fight-ending choke. He spent the remainder of the round as a human Jansport, softening Pettis up with short punches designed to move his hands, splitting him above the eye on the left side in the process.

He was one round into his first main event and looking good, but he wouldn’t win another round.

Pettis made the right adjustments, remained technical, and won the battle of the emerging, young flyweights. When Moreno returned to action the following spring in Santiago, Chile, he shared the cage with a familiar foe — Pantoja — and suffered a familiar fate, losing to the Brazilian veteran by unanimous decision.

Thirteen months after forecasting his future as a champion, Moreno was on a two-fight slide, and towards the end of 2018, when the future of the flyweight division was in doubt, “The Assassin Baby” was let go by the promotion.

Legacy Fighting Alliance (LFA), one of the premier regional promotions in the sport, quickly signed Moreno, and he claimed the organization’s flyweight belt in his first appearance in June. 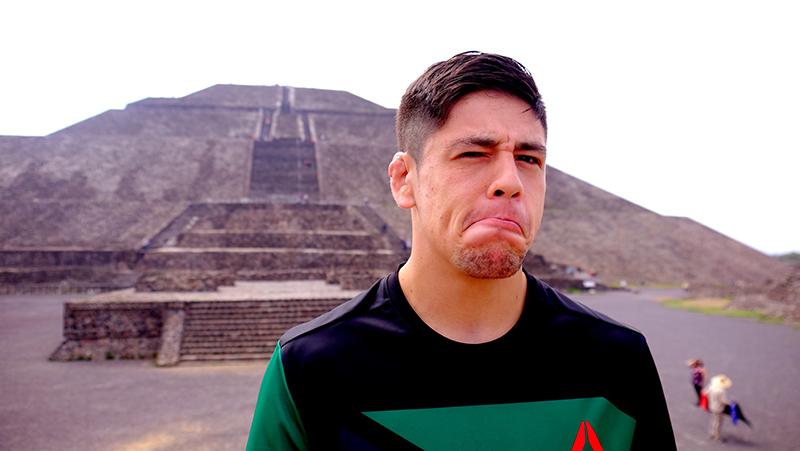 Brandon Moreno poses in front of Pyramid of the Sun in Teotihuacán, Mexico on 6/7/17 (Photo by Juan Cardenas for UFC.com)

He wouldn’t make a second appearance under the LFA banner because three-and-a-half months later, he was back in the UFC.

The division began thriving once more, and Moreno was brought back into the fold, battling undefeated newcomer Askar Askarov to a split draw result in his first fight back.

While he was back in the fold, he was also without a victory in his last three trips into the Octagon and playing catch-up against competitors that had maintained their place on the roster or returned to the biggest stage in the sport sooner than he did.

He got back into the win column with a unanimous decision victory over TUF 24 cast mate Kai Kara-France in December 2019, and outworked Brazilian stalwart Jussier Formiga on March 14, 2020 in Brasilia, Brazil, the final event before the global coronavirus pandemic forced the sporting world to collectively hit the pause button.

Moreno made is second appearance of the year at UFC 255, scoring a first-round stoppage win over Brandon Royval in a de facto title eliminator on the same night that champion Deiveson Figueiredo successfully defended his title for the first time.

With both competitors having made quick work of their respective opponents while coming through their fights unscathed, they were paired off together in the main event of UFC 256 just a few short weeks later.

On December 12, 2020, Figueiredo and Moreno battled to a majority draw in a bout that earned a podium finish in the Fight of the Year balloting.

One judge scored the fight 48-46 in favor of the champion, while the other two had the bout level at 47-47, with the third-round point deduction incurred by Figueiredo keeping the Brazilian champion from getting the victory and prompting the UFC to book an immediate rematch between the two.

Moreno looked sharp right out of the gate when the two met for a second time at UFC 263, taking the fight to Figueiredo without over-extending.

He was patient and measured, attacking with low kicks and crisp punches, working behind a clean jab and doing well to avoid the wild power shots coming back his way. He spun the champion around with a jab late in the round and looked calm and confident standing in the pocket throughout the opening stanza. 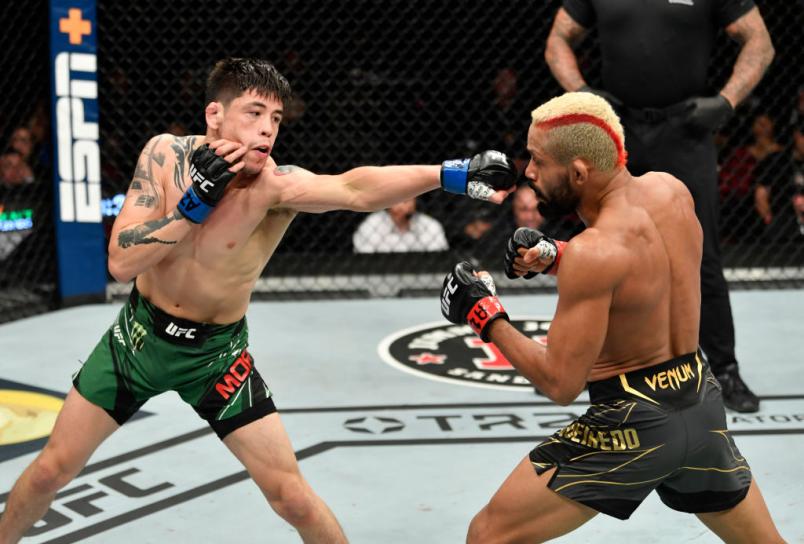 Brandon Moreno of Mexico punches Deiveson Figueiredo of Brazil in their UFC flyweight championship fight during the UFC 263 event at Gila River Arena on June 12, 2021 in Glendale, Arizona. (Photo by Jeff Bottari/Zuffa LLC)

Brandon Moreno of Mexico punches Deiveson Figueiredo of Brazil in their UFC flyweight championship fight during the UFC 263 event at Gila River Arena on June 12, 2021 in Glendale, Arizona. (Photo by Jeff Bottari/Zuffa LLC)

Figueiredo took the fight to the canvas immediately to start the second, looking to attack the neck, but Moreno defended well, fully cognizant of the champion’s guillotine choke. The challenger created a scramble and worked back to his feet, immediately going on the offensive, scoring with knees before landing in top position on the canvas.

Moreno ate an elbow from the bottom that created a large mouse over his left eye, but he remained undeterred, staying on top of the flyweight titleholder and making him work off bottom, chipping away at his gas tank.

A little over a minute into the third round, Moreno threw an overhand right that caused Figueiredo to pause ever so slightly, and the challenger used that hesitation to his full advantage, clasping his hands around the champion’s upper body. When he couldn’t twist the champion to the canvas, Moreno climbed on his back, instantly forcing Figueiredo to the canvas and sinking in his hooks.

Figueiredo defended the initial squeeze with Moreno’s arm positioned over his jaw, but the Mexican challenger stayed after it. A few punches cleared the champion’s hands out of the way, and Moreno deftly laced his right arm under Figueiredo’s chin.

The champion thought about fighting the hands, but knew he was beat, tapping out at 2:26 of the third round.

It took him 1,513 days, but on June 12, 2021, Brandon Moreno made good on his promise, earning the UFC flyweight title in his lone appearance of the year.

After returning to the promotion having lost his final two bouts before his one-fight hiatus, he’s now undefeated in his last six appearances inside the Octagon, holding a 1-0-1 edge over Figueiredo as the two ready to meet for a third time in the co-main event of next year’s first pay-per-view, UFC 270, on January 22 at Honda Center in Anaheim, California.

From the sixteenth seed and a surprising debut to a three-fight winning streak to a two-fight slide.

From being on the outside looking in for a moment to standing on top of the division today, it’s been an incredible journey for the 28-year-old flyweight champion, and something tells me there is plenty more to come.